Inside the secret world of Dominican baseball 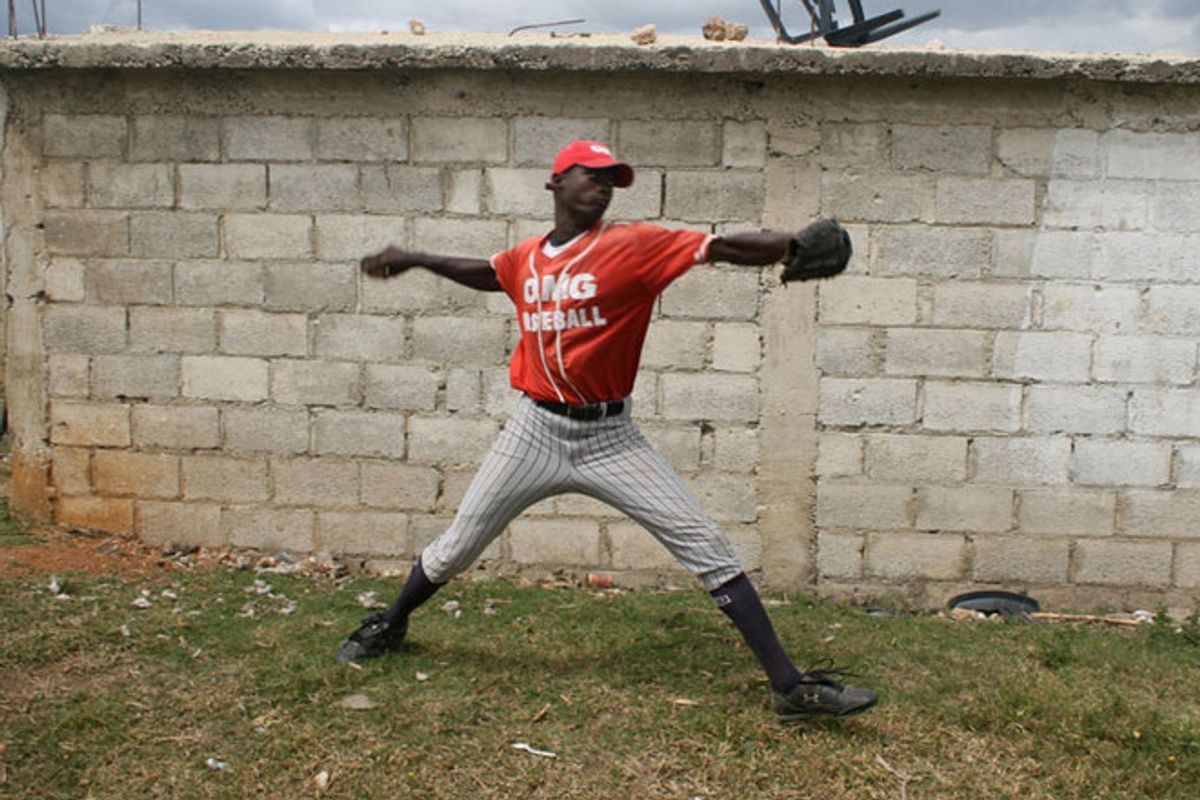 A still from "Ballplayer: Pelotero"
--

"The gringos may have invented the game," a grinning teenage boy boasts to the camera in Spanish, as he's sprawled out with a couple of buddies on their bunk beds in a spartan cinder-block dormitory. "But we're better at it."

I had a brief moment of nationalist reaction to this statement, which comes about midway through "Ballplayer: Pelotero," a gripping documentary that takes us inside the largely closed world of youth baseball training and recruitment in the Dominican Republic. But you can't say the kid is wrong, objectively speaking. Eight of the 76 players selected for Tuesday night's Major League Baseball All-Star Game were born in the Dominican Republic, an island nation of 9.3 million people that is roughly 3 percent the size of the United States. If anything, that slightly understates the proportion of Dominicans in the major leagues, which is close to 20 percent. (Throw in an equal number of Venezuelans and a smattering of Puerto Rican, Panamanian and Cuban players, and about a third of this year's All-Stars come from Latin America.)

Of course, as this fascinating film makes clear, there's no way to separate the intense Dominican national passion for baseball from its social, cultural and economic context. While "Ballplayer" is certainly unsettling, must-see viewing for baseball fans -- a nonfiction follow-up to Anna Boden and Ryan Fleck's outstanding 2009 feature "Sugar" -- it's a vibrant tale, alive with color and texture, that's far more than a sports movie. As one of the Dominican trainers we meet in the movie explains, young peloteros are a lot like sugar cane, the country's other principal cash crop: You raise them and nourish them and ripen them, and then, when the time is right, you harvest and sell. And that guy's not a villain in this story, by any means! He's an entrepreneur, trying to carve out an honest living amid the bizarre, plantation-style world of Dominican youth baseball. He houses, trains and educates young players at his own expense, and will never earn a dime off them unless he can sign them up with a major league team after they turn 16.

Filmmakers Ross Finkel, Trevor Martin and Jon Paley (collectively known as Guagua Productions) spent a year living and working in the Dominican Republic, focusing on the stories of two highly rated teenage shortstops who became eligible to sign with big-league teams in the summer of 2009. One of those players, Miguel Angel Sanó, was seen as a potential superstar, perhaps the best Latin American prospect of that year. The other, Jean Carlos Batista, didn't have the baseball world in the same tizzy but was still seen as a genuine "five-tool" player, meaning he could, at least potentially, hit for average, hit with power, run, field and throw. Both came from the legendary baseball breeding ground of San Pedro de Macorís, a city known as the "cradle of shortstops," and both had been selected and nurtured by reputable trainers: Sanó by Moreno Tejeda, whose prize protégé was current New York Yankee star Robinson Canó, and Batista by Astín Jacobo Jr., a Dominican baseball lifer who by his own account has helped rear at least 70 big-league players.

Under Major League Baseball's arcane, oft-twisted and oft-criticized rules, international amateur players like Batista and Sanó can sign with pro teams on or after the July 2 that follows their 16th birthday. Both of those guys were expecting to become overnight millionaires as of July 2009, thereby lifting their extended families out of the dire poverty that afflicts the overwhelming majority of Dominicans. Historically, the signing bonuses paid to Latin American players were insultingly low -- Miguel Tejada, who became a six-time All-Star and won the American League's Most Valuable Player award in 2002, originally signed in 1993 for $2,000 -- but in recent years they have climbed into the millions for the very best prospects. A year before Sanó and Batista came on the market, Dominican pitcher Michael Ynoa had signed with the Oakland Athletics for a record-setting bonus of $4.25 million.

But Ynoa was almost immediately injured, and has pitched a total of 11 innings of baseball in his professional career. Like the vast majority of Dominican signees, he will probably never make the majors. (According to SI.com, only 33 out of 1,235 Dominican teenagers signed between 2003 and 2010 have played in the big leagues.) From a team's point of view, paying big money to a gangly kid whose future physiological and psychological development are unknowable is a long-odds gamble, and as we see in "Ballplayer," pro scouts will do whatever they can to drive the price down. While baseball traditionalists argue that it's best to get hold of a promising player as young as possible, there's little evidence to support that view. (Baseball is now considering whether to revise the signing age upward, probably to 18.) The current rules, in fact, were instituted following the notorious case of Jimy Kelly, a Dominican shortstop signed by the Toronto Blue Jays in 1984, when he was 13 years old. After washing out of pro ball, Kelly wound up on the streets of New York in his 20s, homeless and uneducated.

Batista and Sanó come off as likable, cocksure young guys who are carrying the future welfare of their entire families on their backs, and have been promised too many things by too many people. They've wandered into a nest of vipers and are, like teenage boys throughout history, barely aware of the dangers. Over the course of "Ballplayer," both become embroiled in the widening controversy over determining Latin American players' real ages and identities, which has sprung from several widely publicized cases of fraud. Cleveland Indians pitcher Fausto Carmona, a 2010 All-Star, was accused earlier this year, for example, of having faked his identity throughout his entire career. His real name is apparently Roberto Hernández, and he's actually 31 years old, while Carmona claimed to be 28. (After agreeing to a salary cut, Hernández may be allowed to resume his career.) Everyone in baseball suspects that these kinds of falsehoods are commonplace, especially when you're dealing with uneven, handwritten record-keeping in a poor, largely rural nation like the Dominican Republic. Not nearly as many people seem aware that Major League Baseball's own peculiar rules, and the largely artificial premium placed on being 16 rather than 18 or 20, created the problem in the first place.

In consequence, almost every Latin American player is considered guilty until proven innocent, and in Sanó's case, it appears that duplicitous pro scouts may have spread unsubstantiated rumors about his age and identity in order to drive down his signing price. If you're enough of a hardcore baseball fan to follow amateur signings, you know how these two guys' stories have turned out so far, but I don't want to spoil the considerable suspense of "Ballplayer" for others. Let's just say that neither Batista nor Sanó signed on July 2, 2009, as expected, but that after some unexpected and dramatic twists and turns, both are now playing pro ball. Whether either will ever make it to the big leagues, let alone the superstar level of current Dominican All-Stars like Canó or David Ortiz or José Bautista, is quite another matter. And whether baseball can ever work out its dysfunctional relationship with the Dominican Republic -- a nation that loves the sport with a fervor Americans lost half a century ago -- well, that one's really a long shot.

"Ballplayer: Pelotero" opens this week at the Maysles Cinema and Quad Cinema in New York and the Laemmle Music Hall in Los Angeles, with other cities to follow. It's also available on-demand from cable and satellite providers, and from iTunes, Amazon, VUDU and other digital providers.