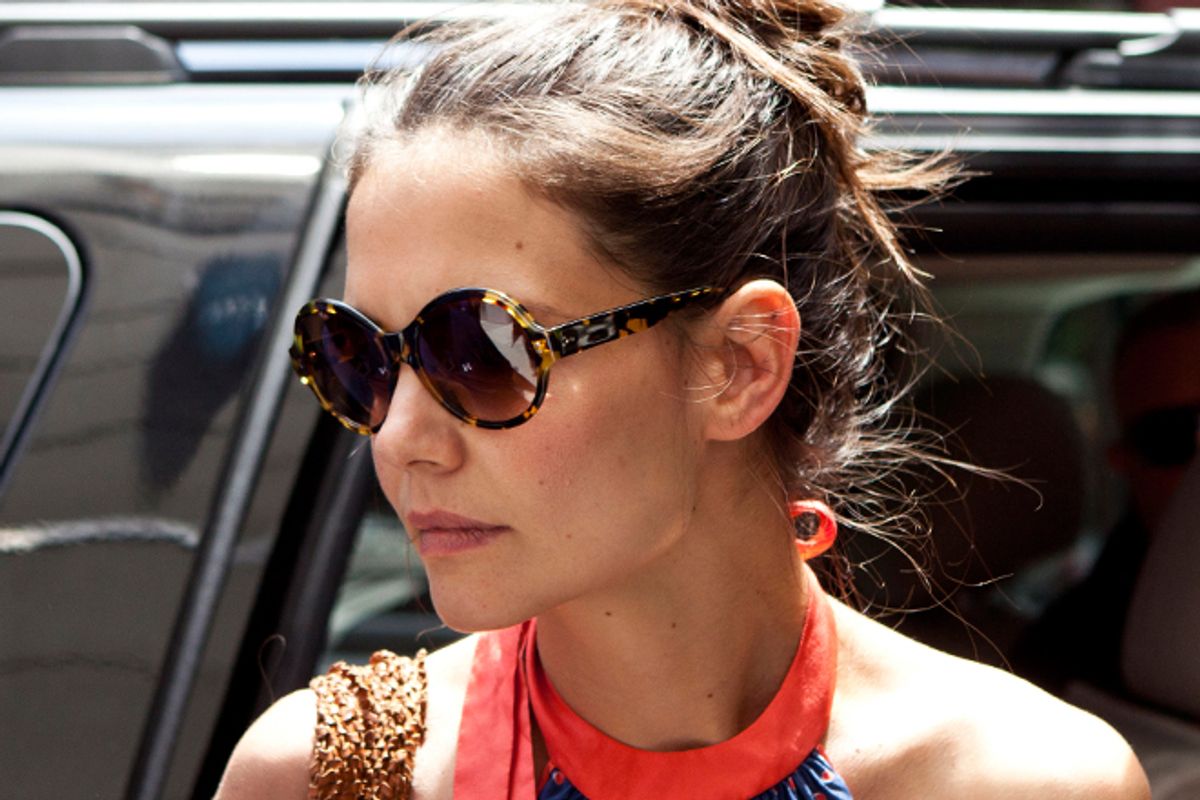 When the news broke two weeks ago that Katie Holmes had filed for divorce from her rich, handsome and occasionally babble-spewing husband, her fans and detractors alike had plenty of speculation on where the 33-year-old actress would go from here. And as she fast-tracked the dissolution of her marriage and settled in to her new Chelsea digs with daughter Suri, there were those who wondered just how that plucky Joey from "Dawson's" would fare in a role that few of us ever imagine ourselves in: single mom.

Raising kids is hard with a partner, but it's a whole other set of challenges when you're doing it on your own -- especially in the eat-you-alive wilderness of New York City. Sure, Holmes will not likely eat yogurt mournfully in her pajamas on the nights Tom's got the kid, or go for tragic, eHarmony-fueled brunches. But she's still got to deal with a lot of the same crap every other unhitched mother does. And so, in the spirit of sisterhood, I rounded up a few of my single mom friends and asked them what they'd tell Katie about navigating her new life.

"I think you need to have a steady diet of girls' nights out," says Marcelle, whose relationship ended right around the time her daughter was born. "The best remedy ever for heartache is to surround yourself with your besties. Don't try to date immediately upon a divorce or separation. Focus on getting your head straight and setting up a stable environment for the child." And Stacey, who shares custody of her son with an ex in another state, echoes that sentiment -- while urging Holmes not to feel guilty about the new perks of single life. "It's OK to get a baby sitter and go out, and it's OK to meet your friends for lunch," she says. "It’s OK to have fun. You're a better parent when you take care of yourself as well. But you don't have to move on right away. You don't have to replace what you had."

And when you are ready to get back in the game, Katie, be prepared for it to be different from when you left it, back a million years ago in your pre-motherhood 20s. "The hard part is reconciling both your identities now," says Jessica, a single mom with two young children. "When you're dating you want to be the sexy woman, but then you know you also have to be mom. I was seeing someone for a while, and I had this real feeling that he couldn't wait until the kids weren't around so I could turn into his hot girlfriend. And that's a huge stress. There are guys out there who hang on to the MILF idea without seeing you waking up at 6 and making sandwiches. Like, my son's placenta is still in the fridge."

The transition from adorable portion of a happy family to single lady isn't just an adjustment for you either, Katie. Your social circle is going to have some opinions about the new, untethered you. My friend Linda, whose wealthy entrepreneur husband divorced her when her son was an infant, found herself abruptly recast by the very people she thought were her community. "You're almost like a leper," she says. "Don't expect all your old friends to be leaning on your doorstep, Katie. I definitely don't think Victoria and David Beckham are going to be hanging around. If you don’t come from money, your financial and your social status are going to change overnight. You're not in a particular circle anymore. You won’t get invited to those couple parties, but you can't fly off to Paris because you've got a child to take care of." Some of the ostracizing is simply a matter of picking teams. But some of it is more complex. "You're a threatening person in the social scene if you're freshly divorced," Linda says. "There are women who see you as a predator, and their husbands are the prey. Meanwhile, you're considered free game for the guys who want affairs. You'll get hit on by your married friends. It's really icky."

The moms also say that while it's challenging, it's vital to take care of your own mental health while you're helping your kids do the same. "Park the kid in front of the TV and go into the bathroom and cry if you have to," says Stacey. "Nobody ever needed therapy because he watched too much 'Backyardigans.'" And Jessica adds that "Maybe two years after the separation, I got really depressed. It wasn't because I was mourning the marriage. It was that I was out of crisis mode and the autopilot of taking care of the kids. I just hit the wall. Even if you do get shared custody, the mother is always the mother." She says having a supportive family helped most. "It seems like Katie's reconnecting with her family again and going back to them," she says. "It was my dad who said, 'You’ve never done this before. This is your first time being divorced. This is your first time dating after divorce. This is all new, so don't worry if you're doing it right or wrong.' Then I could be forgiving of myself."

And though there may be times, Katie, that your colorful ex does something that drives you bananas, let common sense and that no doubt ironclad divorce settlement be your guide. "I have to have a lifetime relationship with my ex," says Linda. "I'll be at my son's wedding someday, and he'll be there. So if he's ever going to hear something bad about him, it won't be from me."

Single parenting can be rough, even if you're a pretty, youthful actress. Fame and money won't do much for you the moment that, as Jessica recalls, your daughter tells your boyfriend "I wish you would die." It can, however, be richly rewarding. Your bond with your kid is intimate and deep. Your knowledge that you're not stuck in something that doesn’t work anymore can guide you through the rough times. And as Linda says, to Katie and to all other single moms out there, "You know what, sweetheart? You're going to be fine."