Why are conservatives and triangulating Democrats suddenly worried that Obama has killed Clinton's welfare reform? 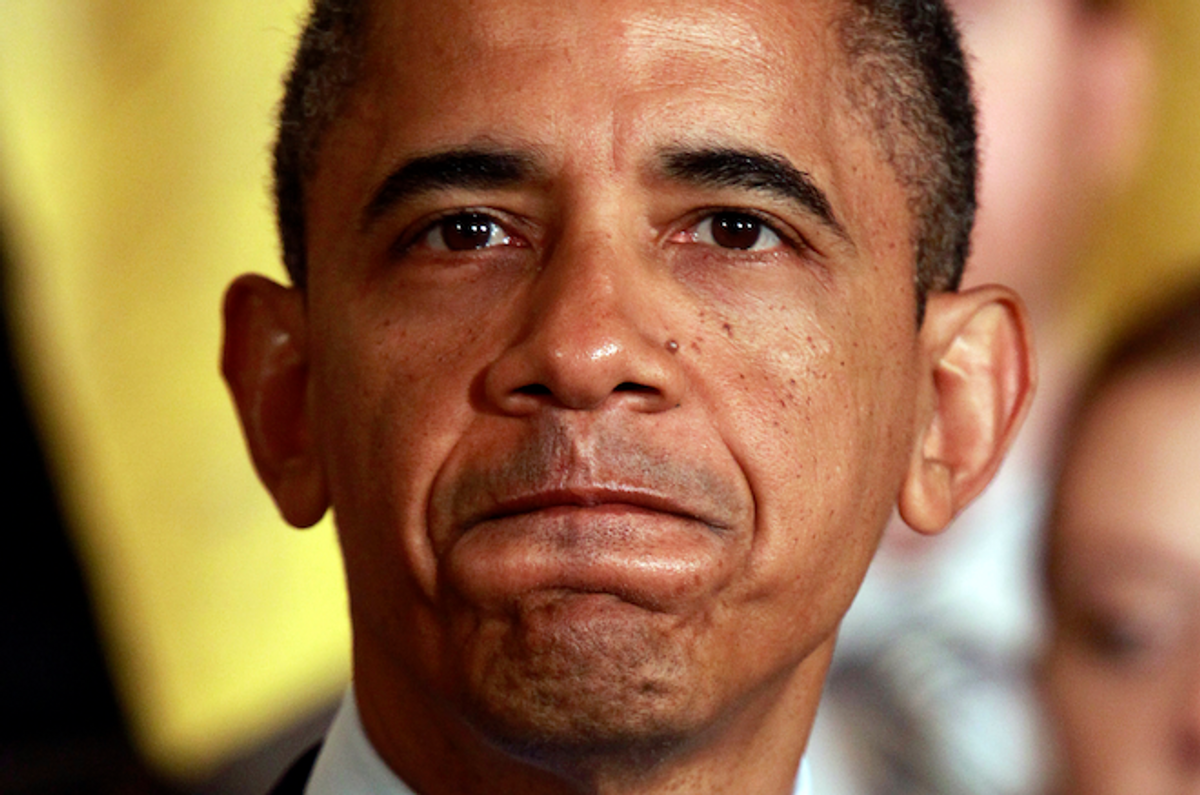 Among Democrats of the "Democrats can only win by being less like Democrats" persuasion, Bill Clinton's welfare reform package was the crowning achievement of his two terms in office. It destroyed a Republican talking point forever -- never again would Republicans accuse Democrats of seeking to redistribute the wealth of the middle class to the undeserving poor! -- and it "succeeded" as policy because it reduced the number of people receiving aid money from the government. Hooray!

Except, of course, that it succeeded by replacing a fairly simple system of providing cash benefits to poor mothers with a system of providing block grants to states, which they then could distribute or not distribute as they see fit, along with 60-month lifetime caps on benefits and requirements that recipients find work, even if there is no work. During the boom years, welfare reform succeeded largely in making the poor into the working poor. During the busts, welfare reform simply meant that it was effectively impossible for numerous people to receive assistance. The Third Way works again!

The federal government's TANF block grants to the states have had the same level of funding -- not adjusted for inflation -- since 1996, meaning less is spent, in real dollars, every year on the program. States are also basically free to spend much of their block grant money on things that meet the goals of welfare reform but that aren't actually benefits for poor people. States are also, of course, free to mandate much stricter work requirements and shorter benefit time limits, both of which are ways of keeping otherwise eligible (i.e., incredibly poor) families off the rolls. (In 2005, Congress made the work requirements even stricter.) The payroll tax cut extension that was passed in February extended the TANF block grant program through the end of the fiscal year in September. (It also included a provision barring aid recipients from accessing benefits at ATMs in liquor stores and casinos, because that is obviously a really important thing to be policing.)

So, lifetime caps and strict work requirements and desperately cash-starved states and a prolonged unemployment crisis have basically all added up to TANF not actually providing any benefits to millions of people who need them. (This, again, is sort of by design!)

And apparently the Obama administration's Department of Health and Human Services has responded to this by expressing a willingness to grant states waivers for some work requirements, under certain conditions. Which led, of course, to the Heritage Foundation accusing Obama of "gutting welfare reform." According to their reading of the HHS memo: "The new Obama dictate asserts that because the work requirements, established in section 407, are mentioned as an item that state governments must report about in section 402, all the work requirements can be waived." But the work requirements were one of the most important parts of the reform law, and they are, supposedly, not supposed to be subject to waivers. Tyranny!

In the past, state bureaucrats have attempted to define activities such as hula dancing, attending Weight Watchers, and bed rest as “work.” These dodges were blocked by the federal work standards. Now that the Obama Administration has abolished those standards, we can expect “work” in the TANF program to mean anything but work.

The new welfare dictate issued by the Obama Administration clearly guts the law. The Administration tramples on the actual legislation passed by Congress and seeks to impose its own policy choices — a pattern that has become all too common in this Administration.

The result is the end of welfare reform.

(There are obviously no links or citations substantiating any of the claims in the first quoted paragraph.)

So I dunno, I guess the Obama administration is circumventing the law to ... make it slightly easier for poor people to receive assistance, which on the whole I think I approve of.

Someone who doesn't approve of this is Mickey Kaus, the famous Democratic warblogger [Update: see below] currently at Tucker Carlson's "The Daily Caller." Kaus is one of those Democrats who, from the first paragraph, is on a never-ending crusade for border fences and the elimination of labor unions and so on. He loves welfare reform because it made dumb, lazy, poor people get off their lazy asses and go to work instead of collecting government checks to buy Cadillacs. Obama's gutting of welfare reform makes him so mad!

He is worried that weakening, or being seen as weakening, the work requirements sends the "wrong signal," and that the hordes of leeches and parasites that make up the American underclass will hear this signal and flock back on the gravy train. But most important, he can't figure out why Obama would do this. Welfare reform works super well -- the proof is that much fewer people receive welfare now! Why change a program that has worked so perfectly?

Especially when there are much better options for helping people, like ... doing some different thing.

7. Nothing in the Obama Health and Human Services Department (HHS) memo suggests this is a temporary measure taken because, thanks to the prolonged recession, there aren’t enough jobs for welfare recipients to take. Even if there is a job shortage, the answer isn’t to get rid of the work requirements but to provide useful, public jobs (that receipients would then be required to perform, on pain of losing their checks, just like regular workers). You could call such jobs “workfare,” but in effect they would be something like a backdoor WPA.

This is especially good because in point six of his zillion-point post, Kaus gets all worked up because he assumes the administration sought to unilaterally institute a policy -- the end of work requirements -- that it knew would never pass Congress because it is politically toxic among voters. But here in point seven, he handwaves away the prospect that this change is designed to ameliorate the effects of a miserable, endless joblessness crisis by arguing that the administration should've just ... magically invented government jobs for welfare recipients? Through a "backdoor WPA"? I mean, sure, that's "the answer" -- if there's an unemployment crisis, give people jobs! -- but it is an answer that is completely politically impossible. Because, who will pay for these jobs, where will the money come from, and will Congress have to have anything to do with it since they won't really like this idea? (Also, in point fifteen, Kaus says this is a potential "Souljah opening" because, just like how some conservatives act like it's always the 1960s, for a lot of horrible Democratic pundits, it's always 1992 to 1998 or so.)

Finally, in point thirteen, Kaus says, "If this is a political move, I don't understand it, because as we all know welfare is horribly unpopular, and promising to destroy welfare got both Reagan and Clinton elected." But maybe -- and I'm really just spitballing, here -- it's not a "political move" and it is actually a move designed to address the fact that welfare reform left the program uniquely unsuited to help people in the event of a massive, prolonged unemployment crisis. Or, hell, maybe HHS is correct when it says it's just trying to let states come up with more effective job prep and placement programs! (Tyranny again!!) Or maybe Obama just did this to piss off the Heritage Foundation and steal the money of hard-working Real Americans to give to shiftless Welfare Queens. Anything is possible! Anything besides poverty-alleviating government programs operating without being vindictively stingy and punitive in the United States, anyway.

[UPDATE: Mickey Kaus objects to my characterization of him as a warblogger, and says he was against the Iraq War. He did support regime change in Iraq, but with enough caveats (he preferred that the invasion be delayed a few months in order to hopefully win greater international cooperation) to leave himself open to criticizing everyone who was more forthright about it once things went wrong.]