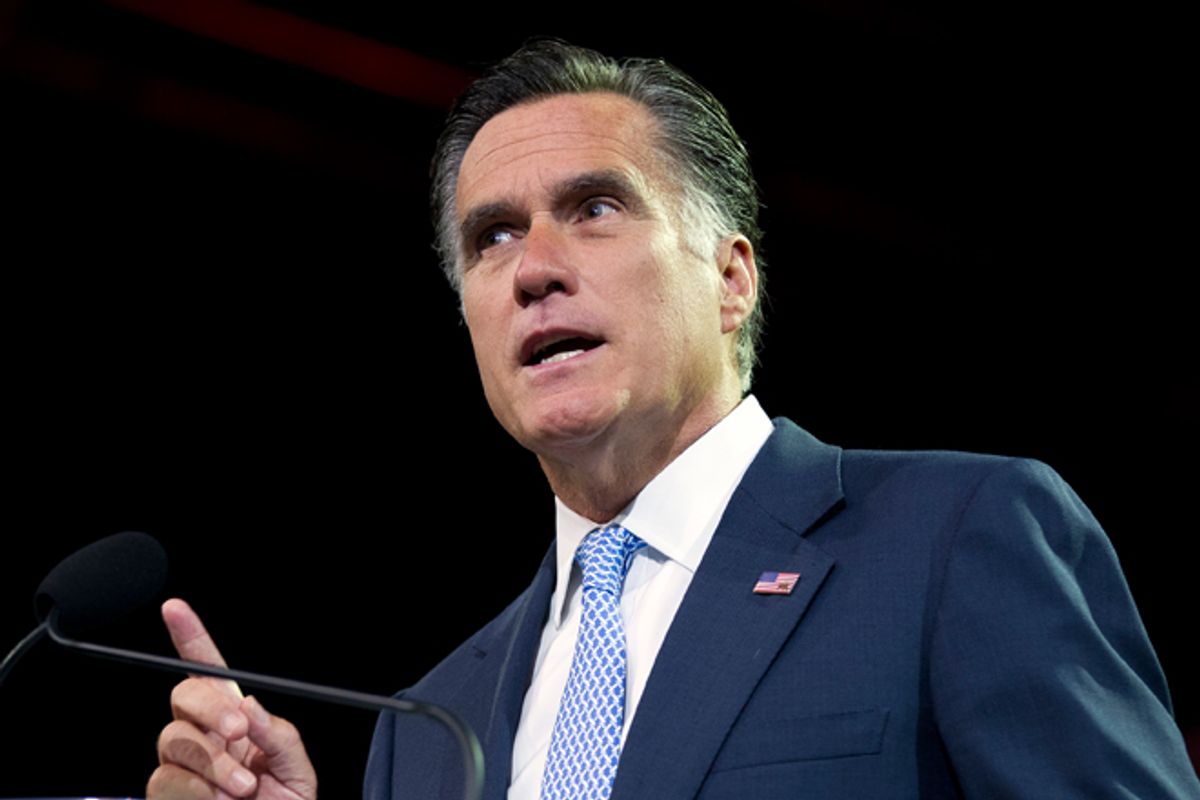 While Mitt Romney struggles to explain his retroactive retirement from Bain Capital, the company he created keeps offshoring U.S. jobs.  Among them: the jobs of 170 workers in Freeport, Ill., now training the workers who will replace them when Sensata moves their jobs to China. SEC filings reveal that the U.S. share of Sensata’s workforce has been dropping ever since Bain acquired it in 2006.  And the Sensata workers aren’t Bain’s only recent casualties.

Some Sensata employees blame Romney for their impending layoffs. “He designed the business model for that company,” says production associate Tom Gaulrapp. “Venture capitalism, where they’re out for every last dollar, no matter what … that’s the attitude they still have.” (The Romney Campaign and Bain Capital did not answer inquiries from Salon.)

Romney left Bain & Co., the consulting firm, to form Bain Capital, an investment firm, in 1984. As the world learned last week, Romney apparently remained “sole shareholder, sole director, chief executive officer and president” for years after his supposed 1999 departure. As the New York Times reported in December, Romney is still profiting from Bain business: His severance package provides him with a share of profits on some Bain deals negotiated up until 2009.

Journalists and opposition researchers have focused on controversial investments and offshoring during Bain’s Romney years, and they’ve found plenty, including companies that, according to the Washington Post, “were pioneers in the practice of shipping work from the United States.”  But when Romney’s tenure at Bain ended, the offshoring didn’t.

Sensata was born in 2006, a car-sensor manufacturing company built from divisions that Bain had purchased from Texas Instruments, Honeywell,  AirPax and other companies. Sensata’s filings with the Securities and Exchange Commission reveal that it had 6,400 employees in 2006, 20 percent of them in the U.S.  Six years later, Sensata employs nearly twice as many people, but fewer U.S. workers. Under Bain’s ownership, the U.S. share of jobs at Sensata dropped to 17 percent in 2007, 12 percent in 2008, 10 percent in 2009, and 9 percent in 2010 and 2011.  Planned layoffs could bring that percentage down to 7 percent.

Freeport Sensata workers are calling for Romney to lean on Bain to cancel the layoffs. They’re backed by a coalition of local organizations, including unions, clergy and the local NAACP. “There are no jobs here that pay anywhere near what we’re making now,” says Gaulrapp, “so they are taking away my livelihood, and they are causing a radical change in my life: going from a well-paying job that got a lot of satisfaction to it, and going to a future that is nothing short of bleak.” Gaulrapp, who’s 54, says he now questions whether he’ll ever be able to retire.

While cutting U.S. jobs, Sensata has expanded its facilities abroad, which include manufacturing plants in Bulgaria, China, the Dominican Republic, Mexico, Malaysia and South Korea, and business/product development centers in Belgium, Bulgaria, China, Japan and the Netherlands. Since 2007, a Sensata-owned factory in Baoying, China, expanded from 167,000 square feet to 440,000; since 2009, a Sensata-rented facility in Changzhuo, China, expanded from 244,000 feet to 316,000. Meanwhile, Sensata-owned facilities in Standish, Maine, and Cambridge, Md., have disappeared from the company’s filings.

As production shifts overseas became an annual event at Sensata, so did Trade Adjustment Assistance (TAA), the federal program created to help workers who lose their jobs due to outsourcing or imports. TAA records reveal eight instances since 2007 in which groups of Sensata workers were found to qualify for such assistance, in six cities.

Bain does not publicize all of its outsourcing activities. But evidence suggests there’s more where that came from. The Ireland-based pharmaceutical company Warner Chilcott, which was acquired by Bain and other private equity companies in 2005, announced last year that it was “repurposing” a manufacturing facility in Puerto Rico into a warehouse, at a cost of $7 million in severance costs for displaced employees. In 2010, TAA was granted to Warner Chilcott workers in Norwich, N.Y. (an internal memo reported by the Cincinnati Enquirer claimed that those workers’ jobs were being shifted within the U.S.).

In 2009, an official from Bombardier Recreational Products requested TAA assistance for workers in Sturtevant, Wis., but then withdrew the petition.  Bombardier is 50 percent owned by Bain; this month Romney was photographed riding the company’s signature Sea-Doo watercraft. In May, the company announced that 500 jobs would be eliminated in Canada as production shifts to Mexico.

Filings also show other Bain-owned companies expanding their offshore facilities, which could be a sign of more offshoring under way or in the works. Filings show that since being acquired by Bain and fellow private equity firm KKR in 2005, the medical device company Accellent has eliminated a quarter of its U.S. facilities (from 24 down to 18), while acquiring a 61,000-square-foot facility in Malaysia.

Democrats charge that Romney, as president, would make it easier for corporations to escape U.S. taxes while shipping jobs out of the country. Yesterday, the Obama campaign seized on a Tax Notes analysis projecting that Romney policies would “increase employment in low-tax countries by about 800,000 jobs.” “There’s only one problem,” the president told a Cincinnati crowd. “The jobs wouldn’t be in America.”

Meanwhile, Sensata workers are hoping for a miracle. They’ve held rallies and media events. This month, 58 signed a letter to Romney, saying in part, “It’s not right that you stand to get even richer off of our loss and pain … We know that you can take action to stop the outsourcing of our jobs.”  Republican Reps. Bobby Schilling and Don Manzullo of llinois wrote a letter asking Sensata CEO Thomas Wroe to reverse course; they asked that he “strongly consider” rising labor costs in China, energy costs and “the important value of the highly skilled, highly productive workforce in the Northern Illinois region that is second to none in the global economy.” Last night, the Freeport City Council unanimously approved a resolution calling on Romney to visit Freeport, meet the workers, and step in to avert the outsourcing.

“At first, I was angry,” employee Cheryl Randecker told reporters last month. “Now, five or six months away from unemployment, I’m scared … I don’t know how I’m going to make my house payment and pay the bills.” Despite having “worked hard over the past three decades to build a somewhat strong security” for her family, Randecker worries that her daughter may have to leave college. Randecker says she still hopes Romney will intervene: “We’re just asking him to do the right thing, and show how he really does care about working families.”

CORRECTION: The article originally stated that Bain Capital described its outsourcing activities on its company website. The quotes in the article were from Bain & Co's website, not Bain Capital's. We regret the error.