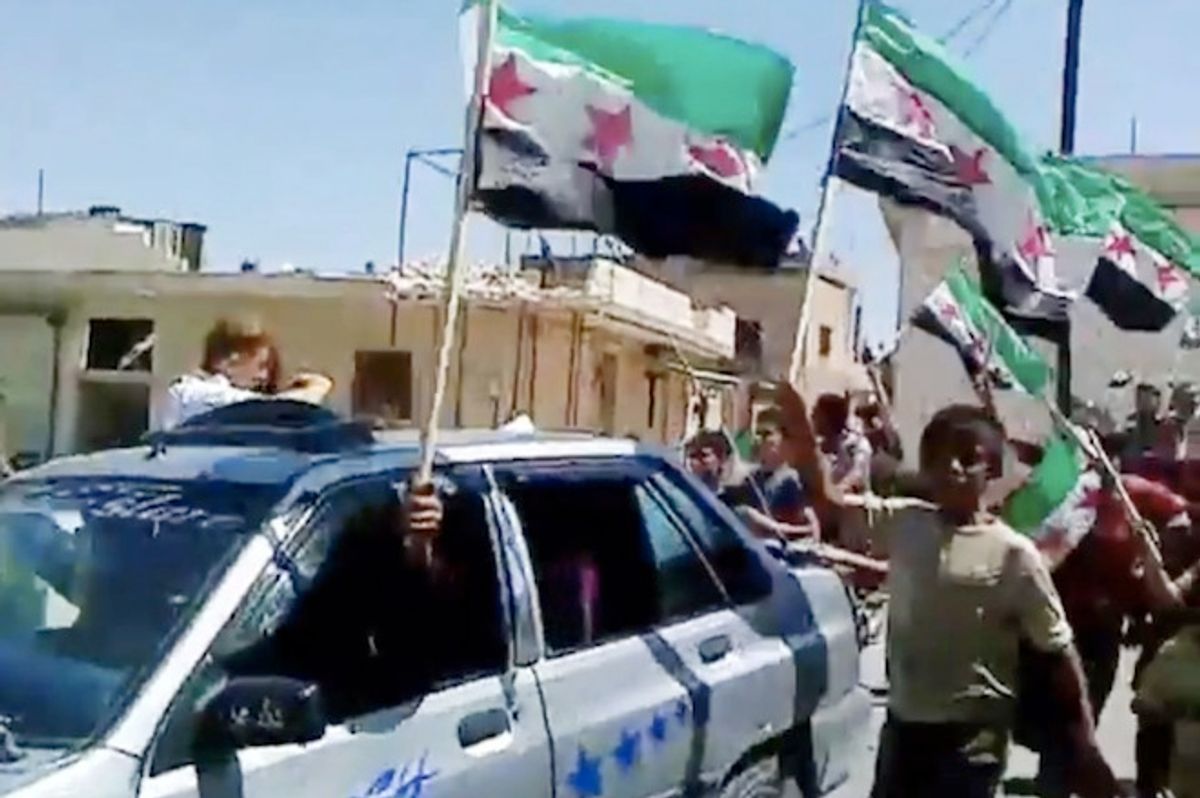 In Damascus today, a suicide bomber attacked a meeting of high level Syrian officials and killed several of them, including the nation's Defense Minister Daoud Rajha and the Syrian military's Deputy Chief of Staff, Asef Shawkat, who is also the brother-in-law of Syrian President Bashar al-Assad. Several reporters covering the region, such as Omar Waraich of Time and The Independent, have deduced that the suicide bomber was "Islamist."

Needless to say, if such an attack -- perpetrated by an "Islamist" suicide bomber -- were aimed at a Western government or those of their allies in the region, it would immediately be branded Terrorism and vehemently denounced. One need not speculate about that, as it has already happened. It was called the Pentagon part of the "9/11 attack," where a plane was flown into America's military headquarters. More analogous was Nidal Hasan's 2009 assault on the U.S. military base at Fort Hood, which was instantly branded Terrorism by American media outlets, Washington officials, and a majority of Americans.

Indeed, even if this kind of attack were directed at Western-supported tyrannies in the region -- such as, say, Saudi Arabia or Bahrain -- the Terrorism label would be widely applied by mainstream Western outlets. In fact, the alleged Iranian plot to kill the Saudi Ambassador -- not civilians, but just this single official from a repellently oppressive regime -- was instantly denounced as Terrorism.

But it's extremely doubtful that the term will be applied by Western media outlets to today's Damascus attack. The New York Times story uses the term only once, with scare quotes attributing it to the Assad regime: "SANA, the official news agency, described the assault as a 'suicide terrorist attack.'" The BBC did the same, referring to the anti-Assad forces as "rebels" and mentioning "terrorism" only when quoting the statements of the Assad government. It's actually inconceivable that any mainstream Western outlet or commentator will call this attack Terrorism.

Beyond the semantics, one already sees, on Twitter and elsewhere, substantial approval being expressed for the attack. Foreign Policy Editor Blake Hounshell referred this morning to "#thatawkwardmoment‬ [that awkward moment] when Westerners and secular Arabs cheer a suicide bombing." U.N. analyst Hayes Brown similarly described "that awkward moment in the UN Security Council where Western govts have to stop to think about whether to condemn a suicide bombing." What makes it even more uncomfortable is that the U.S. Government itself has said that Syrian rebel forces have been "infiltrated" -- at least -- by Al Qaeda, meaning that the U.S. once again finds itself on the same side as its arch enemy, a side that is now using suicide bombs to kill government officials.

I'm not arguing here that this is an act of Terrorism (in general, to the extent the term has any meaning at all, I think attacks on military targets do not qualify), nor am I addressing whether the bombing is justifiable. I'm certainly not calling into question the heinous violence and oppression of the Syrian regime (though I think Western Manichean reporting on the nature of the fighting and the identity of the rebels has been typically and substantially oversimplified). The point here is that we pretend Terrorism has some sort of objective meaning and that it is the personification of pure evil which all decent people (and Good Western nations) by definition categorically despise, when neither of those claims is remotely true.

If someone told me that I could close my eyes and conjure up the most persuasive piece of evidence in support of the point I made this morning, I never would have been able to imagine anything this potent.

UPDATE II: Since this morning, The New York Times article on this attack states definitively in the first paragraph that it was carried out by a suicide bomber:

The BBC says the same ("died in a suicide bombing"). Other reports are apparently suggesting the bomb was detonated remotely. For extremely obvious reasons, whether the attack was carried out by suicide bomb or remote activation has no bearing on the point being made here.

UPDATE III: The New York Times' Robert Mackey insists that I made two significant errors here: namely, the above-mentioned Omar Waraich covers Pakistan, not "the region," and the NYT -- in the very paragraph I just printed in full above -- attributed the report of the suicide bombing to "state television and activists." Duly noted; I'll leave it to others to decide if those are errors and, if so, how significant they are.