Pick of the week: A moody samurai answer to Batman

Pick of the week: A lonely hero with a secret seeks brutal justice -- in 3-D! -- in "Hara-Kiri: Death of a Samurai" 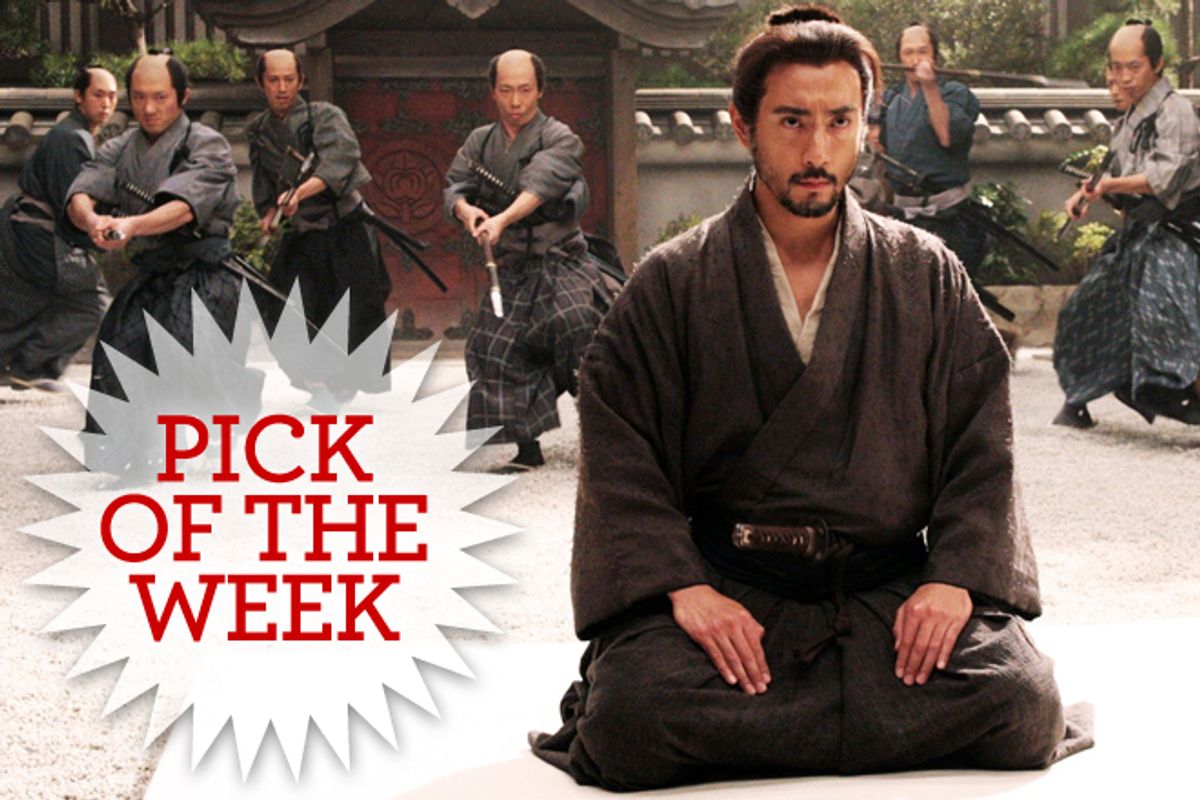 Ebizô Ichikawa in "Death of a Samurai"
--

It's all about Batman this week, and in this case the hype is justified. But I really don't think I need to urge people to seek out "The Dark Knight Rises," as memorable an experience as it is. Let's rank Warner Bros.' marketing rollout for that film as highly adequate, perhaps even above average. If you're looking for counterprogramming on a similar theme -- the lonely nature of heroism, the lies that uphold law and order, and the corruption that always attends power -- I urge you to seek out the stately, brooding Japanese drama "Hara-Kiri: Death of a Samurai," which opens in New York and Los Angeles this week and will gradually reach other places. And unlike Christopher Nolan's Batman spectacle, it's in 3-D! (At least, in its limited theatrical release. It'll still look good in 2-D, which is how you can catch it on VOD.)

Set in a relatively peaceful period of Japan's feudal era, "Hara-Kiri" begins with a middle-aged unemployed samurai named Hanshiro (Ebizo Ichikawa, a well-known kabuki theater actor) turning up at a rural lord's gates, asking for the right to commit honorable suicide on the grounds, as his warrior code permits. Koji Yakusho, a frequent Miike collaborator who played the hero in "13 Assassins," here gets to be the missing lord's gruff right-hand man, who grumbles that they've had way too many of these penniless samurai, grubbing for handouts by pretending to be ready to off themselves. Hanshiro is warned that the last guy to try this -- a kid, really -- told them some sob story about his family but was forced to go through with the self-disembowelment, even though he'd sold his real sword and only had one made of bamboo.

If you're guessing that Hanshiro knows this already, and that he'll be ready to die only after he settles accounts with these petty tyrants and their sadistic, hypocritical moral code, you're on the right track. He's at least as much a solitary moral crusader as Bruce Wayne, although he could sure use a little of the latter's money. But "Hara-Kiri's" action scenes are restrained and old-fashioned, and not the heart of the movie. This is a slow-moving Japanese picture in the classic pictorial tradition, concerned with the telling of stories, the passage of the seasons, and the physical, social and economic architecture that defines life in a caste-bound culture. Of course we will learn about the terrible suffering of that young samurai with the bamboo sword and witness Hanshiro's quest for harsh justice on his behalf. But director Takashi Miike and cinematographer Nobuyasu Kita use the murky, deep-focus 3-D to achieve a slightly fantastic picture-book ambiance, not as a splashy effect.

Yes, I have finally mentioned the director of "Hara-Kiri," Takashi Miike. If you've heard of him, you'll have some idea why. Miike's core fans expected something specific when the news arrived that he was making a 3-D samurai movie, and to his immense credit that isn't what this is. An international cult figure who has made more than 40 feature films, along with at least that many TV episodes, shorts and straight-to-DVD movies, Miike is best known for his button-pushing, deliberately confrontational crime and horror movies, including the disturbing 1999 female-revenge flick "Audition" and the ultraviolent 2001 "Ichi the Killer." When Miike's "Hara-Kiri: Death of a Samurai" premiered at Cannes last year -- as the first 3-D competition film in that august festival's history -- most viewers showed up expecting nonstop splatter.

The thing is, it is always a mistake to pigeonhole Miike as some kind of transgressive, gore-obsessed rebel. He has worked in almost every genre imaginable, from comedies to love stories to kid-oriented adventures to adult-oriented drama. I think his movies are almost always fascinating and just as often flawed and half-finished; my personal faves may be the David Lynch-style yakuza head trip "Gozu" and the lovable superhero spoof "Zebraman," which give little indication of having been made by the same person. (Miike has reportedly cited Paul Verhoeven's "Starship Troopers" as his favorite movie. First of all, that explains a lot. Second of all, now I'll forgive him anything.) This time around the chameleonic Miike has adopted yet another identity, that of sober and serious art-house auteur from the golden age of Japanese cinema. Surprisingly enough, it fits; you might be better off seeing "Hara-Kiri" while not knowing about Miike's other work.

This certainly isn't Miike's first foray into the samurai genre, nor his first effort to plumb classic Japanese source material. Just a year before "Hara-Kiri," he made the action-packed international hit "13 Assassins," based on both a historical episode from the 1840s and a 1963 film by Eiichi Kudo. I loved the tense, dramatic and highly pictorial first half of that movie, which recalled the atmosphere and tone of classic samurai cinema, but it eventually devolved into a repetitious, if impressive, orgy of violence. (Mind you, Miike was being true to the tradition there too.) "Hara-Kiri" is even more obviously a play for artistic and moral legitimacy, a mordant critique of the samurai code drawn from a novel by Yasuhiko Takiguchi, which inspired Masaki Kobayashi's "Harakiri" (or "Seppuku"), one of the greatest Japanese films of the '60s.

It's not likely that Miike will devote himself to making films in the iconic mold of Kobayashi or Kenji Mizoguchi (another key influence here) for the rest of his career. He's a formalist, or, if you want to hurl insults around, a postmodernist, whose unifying principle is the lack of any unifying principle beyond a seemingly indiscriminate passion for movies, TV, pop music and every other form of culture. But with this sober, mournful, gorgeously mounted and marvelously acted drama, Miike connects himself to the greatest traditions of Japanese film and to the period of historical self-examination that followed the debacle of World War II. And he also crafts one hell of a fable of heroism. If Warner Bros. is already looking for a director to tackle the next Batman reboot, I've got a name to suggest.

"Hara-Kiri: Death of a Samurai" opens this week at the IFC Center in New York and the Downtown Independent Theater in Los Angeles. It opens July 27 in Boston, Aug. 10 in Seattle, Aug. 16 in Phoenix, Aug. 17 in Spokane, Wash., and Aug. 31 in Columbus, Ohio, with more cities to follow. It's also available on-demand (in 2-D only) from Amazon, iTunes, VUDU and many cable providers.