How does Fox maintain editorial animosity toward immigrants without alienating the important voter group? 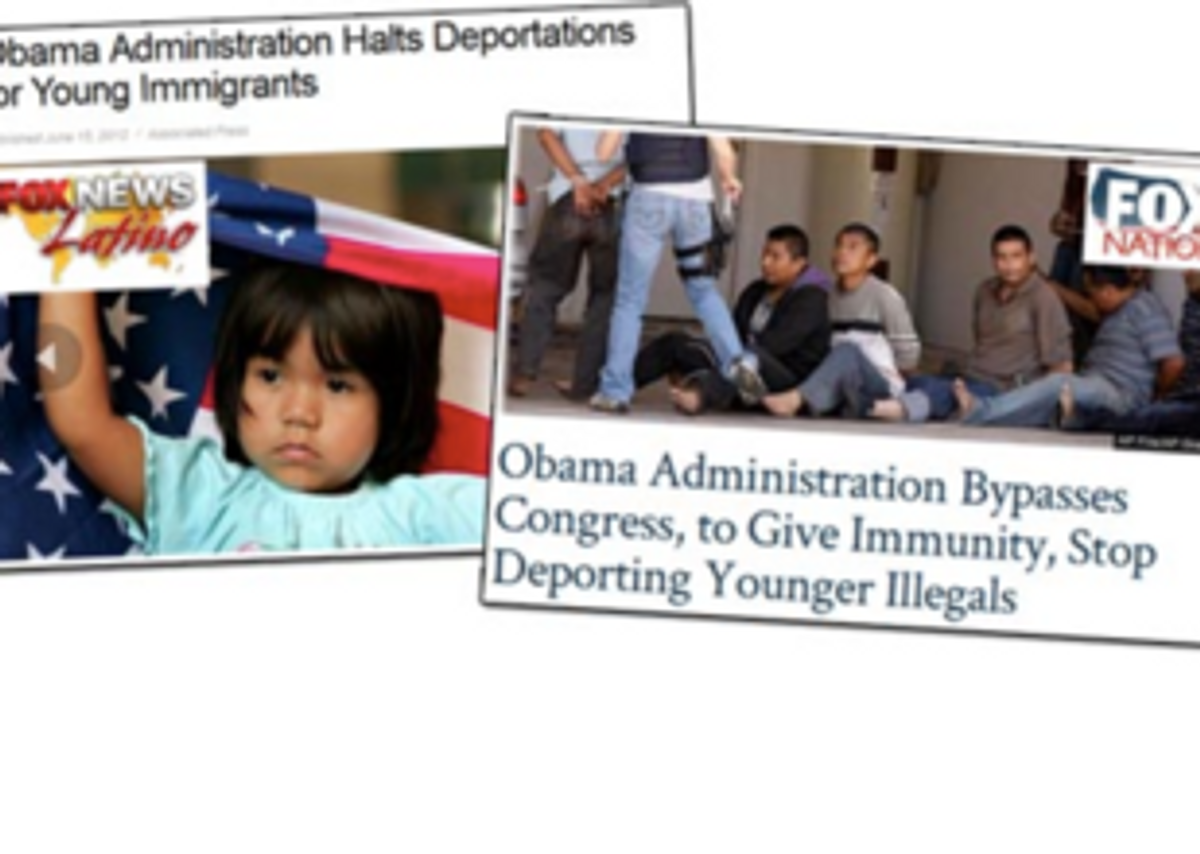 The reputation of Fox News as a brazenly biased, right-wing mouthpiece for the Republican Party and a conservative agenda is well-established. From its upper management (Rupert Murdoch, Roger Ailes) to its front-line pundits, it has forged a network that has entirely abandoned any pretense of impartiality.

That well-honed partisan prejudice has proven to be useful in poisoning the political discourse. Fox News has exploited its audience to favor GOP candidates and sway perceptions of complex issues like healthcare, economics and the environment. Among the most prominent of the issues that Fox has sought to distort is immigration. Its reporting is relentless in falsely portraying immigrants as shiftless lawbreakers who steal jobs from American citizens and drain the nation of scarce public resources.

Fox viewers are accustomed to stories about "illegals" swarming across the border to take up residency in the U.S. and sponge off our prosperity. They are vilified as criminals and blamed for everything from disease to the recession. There is hardly a mention of immigrants on Fox that isn’t associated with drunkenness, joblessness or drug cartels.

Lately, however, someone at Fox News has recognized a major flaw in the strategy to demonize immigrants, particularly Latinos. One of the fastest-growing segments of the U.S. population happens to be legal Latinos who are either naturalized or natural-born citizens. The U.S. Census Bureau reports that the Hispanic population grew at about four times the nation’s average growth rate between 2000 and 2010. The report notes that “the Hispanic population increased by 15.2 million between 2000 and 2010 and accounted for more than half of the total U.S. population increase of 27.3 million.”

The problem for Fox News, and its ideological benefactors, is that many are citizens who can vote and are registering in record numbers. This is particularly noticeable in states that are crucial for Republican electoral victories, like Nevada, Arizona and Florida. But the trend is evident in some measure throughout the country.

This situation poses a disconcerting problem for Fox. How does it maintain its editorial animosity toward immigrants without alienating an increasingly important voter group? The answer appears to be by developing news content specifically for this demographic and sequestering it from the rest of the viewership.

June 15, 2012: In response to President Obama’s announcement of a policy shift wherein certain young immigrants would be granted work permits rather than be deported, the Fox News Latino website posted a story headlined,“Obama Administration Halts Deportations for Young Immigrants.” That’s a factually accurate description that treats the news in a neutral manner. The headline was accompanied by a sympathetic photo of a young Latina child draped with an American flag.

However, on Fox Nation they went with the headline “Obama Administration Bypasses Congress to Give Immunity, Stop Deporting Younger Illegals.” In that short sentence they managed to imply impropriety on the part of the administration, suggest the controversial subject of amnesty, and insult Latinos by employing the dehumanizing label of “illegals” (even though the people affected by this initiative did not break any law). The photo accompanying this article was of adult Latinos sitting up against a wall in handcuffs.

It is also notable that the Fox News Latino site posted the Associated Press article about the announcement in full. The Fox Nationalists posted only two paragraphs plus a video from Fox News of right-wing wacko Allen West expressing his outrage. This is further evidence that the Fox Nationalists want to avoid giving their dimwitted readers too much actual information but prefer to throw up as much ultra-right-wing opinion as possible.

June 19, 2012: Bloomberg released a poll that showed that 64 percent of likely voters favor Obama’s policy on suspending deportations of certain younger immigrants. Note that this substantial majority is of likely voters, not just Latino voters. So the story has relevance to a wide range of news viewers and could even be an important predictor of who will win the presidency in November. Nevertheless, Fox News did not run this story. Fox Nation did not run this story. The only Fox destination where you can read this story is on Fox News Latino. So Fox is deliberately hiding from the rest of its audience the news that a substantial majority of Americans agree with this policy.

What’s more, the tone of the reporting is distinctly different from that on other Fox properties. There isn’t a hint of hostility toward immigrants. The story accurately refers to “prosecutorial discretion” as the means of carrying out the policy, rather than the false assertions of executive orders or dictatorial overreach that appear on Fox News. The derogatory phrase “illegals,” used routinely on Fox News, is nowhere in the story, having been replaced by “undocumented immigrant.” The story notes correctly that Congress, not the president, had dropped the ball on the DREAM Act and that it was Republicans who filibustered it out of existence. These are news insights that will never be seen by the broader Fox audience unless they happen to read Fox News Latino.

June 25, 2012: Fox News covered the Supreme Court ruling on the controversial Arizona law against undocumented immigrants in its uniquely racist way by tailoring the story differently to different audiences. On Fox News Latino the headline accurately reported “Court Strikes Down Most of AZ Immig Law.” However, on Fox Nation they went with the misleading “U.S. Supreme Court Upholds Controversial Part of Tough Arizona Immigration Law.” Even Fox News was more balanced by saying that the “Supreme Court Reins In Arizona on Immigration.”

Here we have one arm of Fox reporting that the law was struck down, and another arm saying it was upheld. So once again Fox panders to its Latino audience on the website aimed at them, while slanting steeply in the opposite direction on Fox Nation, a community of such rancid bigotry that Fox had to close the comments section for fear of the vile postings that frequently occur. Obviously, Fox knows its audience.

July 8, 2012: The Fox News Latino website featured an article from the Associated Press on the issue of voter suppression that was reported in a manner that respects the truth. The author correctly notes that instances of in-person voter fraud are nearly nonexistent, but that the photo ID laws advanced by Republicans will disenfranchise thousands of eligible voters.

On Fox News the typical approach to this story is the ludicrous assertion that opponents of ID laws are proponents of fraud, even though they can never cite actual incidents of fraud. The purpose is obvious. Fox News is working in concert with the GOP to purge Democrats from the voter rolls. However, on Fox’s Latino-focused website the story is completely different. It is treated with the proper attention to the harm that would befall Latino voters.

In addition to the Fox News Latino website, Fox recently announced that it is launching a new Spanish-language broadcast television network, MundoFox. The network will feature both entertainment and news programming, but the initial press release states that it “will not have any association with Fox News Channel.” It also quotes the senior VP of news, Jorge Mettey, describing the type of viewer they intend to attract in a particularly derogatory light:

Apparently Mettey regards “regular normal” Latinos as victims who are uninterested in improving their lives, and he doesn’t want any of “them” watching his network. MundoFox is getting off to a great start by insulting a fair portion of their potential audience. This aggressive posturing is actually typical of the way Fox has launched all of its networks. When announcing Fox News as being “fair and balanced,” it was implying that the other networks were not merely competitors but also untrustworthy. When it launched the Fox Business Network it bragged that “a Fox channel would be ‘more business-friendly’ than CNBC,” although that doesn’t really make much sense for a network that is supposed to be reporting objectively.

It is also notable that Mettey has a somewhat checkered past. He was fired from his position as news director at KMEX in 2007, amid allegations of ethical breaches. The Los Angeles Times reported that

the alleged improprieties investigated included whether Mettey had benefited financially from coverage of Puebla’s governor at a time when he was being criticized for his association with an accused pedophile and of an African-themed zoo in Puebla in which Mettey’s wife, Denise, has an ownership interest. In addition, the news division allegedly accepted free tickets on an Aeromexico flight from Los Angeles International Airport to Puebla.

With the expansion into the Latino community, Fox is reaching out to connect with a new audience. In the process it is conducting itself in an uncharacteristically fair and balanced manner. Make no mistake, there are good reasons for this atypical behavior on the part of Fox. Roger Ailes, Fox News CEO, was a Republican strategist and media consultant before launching Fox with Rupert Murdoch. Ailes knows that Republicans have a demographics problem as Latinos continue to grow as a percentage of the population and, therefore, the electorate. The Tea Party-dominated GOP can’t see past its prejudices and frothing immigrant hatred. But Ailes knows that if the party doesn’t win back some Latino support it will be a minority party for decades to come.

So with Fox News Latino and MundoFox, Ailes is doing for the party what it is too stupid to do for itself – pandering to the Latino vote. Fox thinks it can segregate the reporting so that its Latino audience will see stories that are framed positively while the rest of the Fox universe remains steeped in the animus of bigots and conservative partisans. It’s a cynical ploy that could only be hatched by people who think that Latinos are stupid enough to fall for it. Fortunately, that’s where Fox is most likely going to be proved wrong.

Mark Howard is an artist and author and the publisher of News Corpse. His political and socially disruptive artwork has been displayed internationally.