Where did Bristol Palin's 3-year-old pick up a homophobic insult? (Updated) 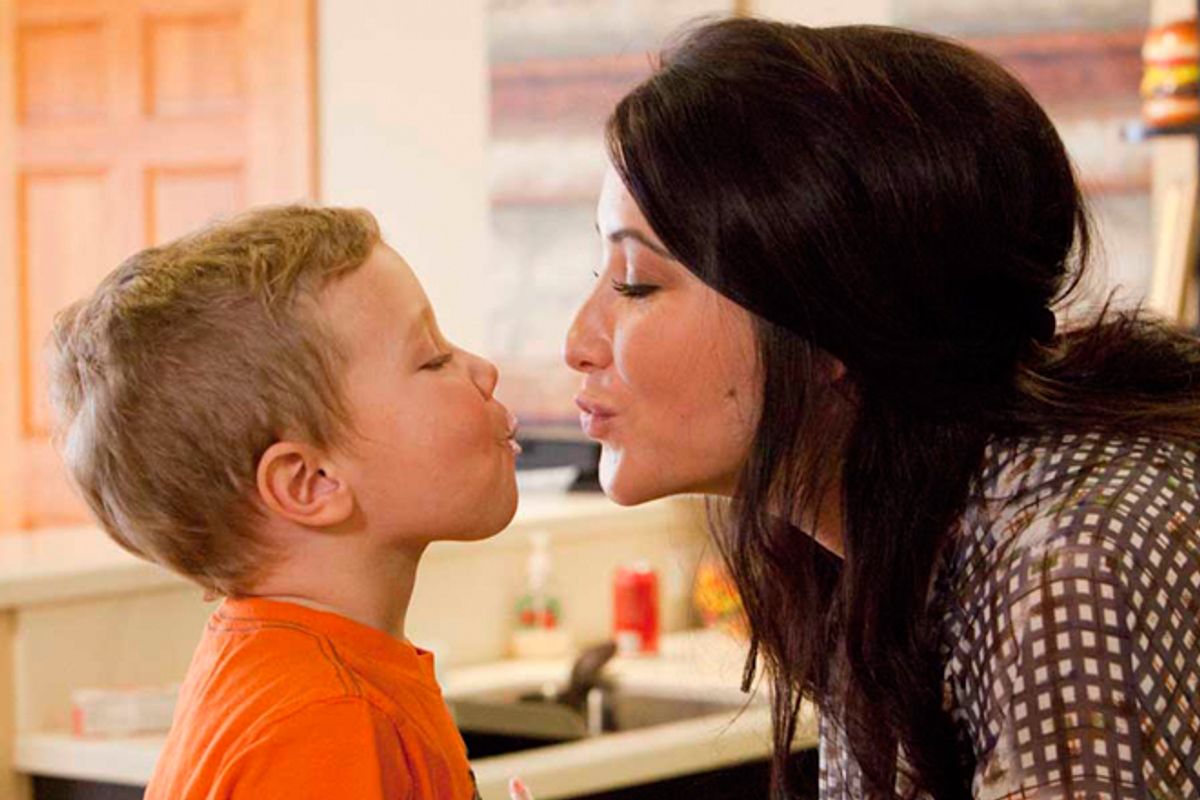 Bristol Palin's son Tripp is 3 years old. And at an age when most children are mastering bowel control, the correct application of the indoor voice, and the distinction that Cheerios go in the mouth and not up the nose, young Master Palin has also clearly been working on his vocabulary. In a new clip from his eponymously titled Lifetime reality show "Life's a Tripp," Tripp pitches a meltdown as only a 3-year-old can, smacking his Aunt Willow, declaring "I hate you" to her and his mother, and capping it off by telling Willow, "Go away, you faggot. I don't like you." You what?

It's a word the Palin family already knows its way around. We noticed it nearly two years ago, when the sisters Palin leapt into a Facebook fight to defend her family's honor after a mutual friend named Tre critiqued "Sarah Palin's Alaska" as "failing so hard." First, Bristol declared Tre a "typical shit talker." Then, the then-16-year-old Willow had a few choice – and misspelled – words of her own, informing him that "Haha your so gay. I have no idea who you are, But what I've seen pictures of, your disgusting … My sister had a kid and is still hot … Tre stfu. Your such a faggot." See, when you lob the word "faggot" at someone on Facebook, eventually, someone who sleeps on Bob the Builder sheets is going to throw it right back in your face.

Reality TV is built on dysfunction and judgment, so it's hard not to feel it's just taking the bait to call out Bristol and her sister for exposing Tripp to that revolting insult. Yet it's not just the way the kid blurts out the word he's clearly picked up around the homestead that's so stomach turning – it's the whole framing of that incendiary remark. Behold how the sisters can't stop cracking up as the devilish munchkin tells them "I hate you." Note how Willow threatens to wash the kid's mouth out with soap. (Child-rearing note: This is abusive. Don't do it.) And for the kicker, observe Bristol and Willow's mutual response of shocked, barely stifled giggles to Tripp's outburst. Was it just a nervous reaction? Maybe. But what you don't see is any indication of either of them pausing for a moment to tell the child, "That word is used to hurt people. I don't ever want to hear you say again." It's just that simple, ladies.

By Bristol's own admission, "I'm doing a terrible job disciplining Tripp." To be fair to her, disciplining a 3-year-old is brutal even under the best of circumstances. They are tiny dervishes of amorality. But that's where the compassionate, civilizing work of parenting comes in. And the disappointment with Palin. Is this the same Bristol who not long ago looked like she was making a go of not being a raging jerk? Who seemed like she might be attempting to distance herself from her family's celebrity train wreck and get an education? What happened to that vaguely promising girl? Why is she now instead busying herself writing crackpot, not-helping-with-the-"faggot" -thing responses to Barack Obama's support for same-sex marriage? Back in May, Palin declared:

It would've been helpful for him to explain to Malia and Sasha that while her friends [sic] parents are no doubt lovely people, that's not a reason to change thousands of years of thinking about marriage. Or that – as great as her friends may be – we know that in general kids do better growing up in a mother/father home. Ideally, fathers help shape their kids' worldview. Sometimes dads should lead their family in the right ways of thinking. In this case, it would’ve been nice if the President would've been an actual leader and helped shape their thoughts instead of merely reflecting what many teenagers think after one too many episodes of 'Glee.'

This is coming from the single mother star of a reality show, one whose son calls his aunt a faggot. Yeah, I think Barack and Michelle won't be needing your advice about paternal leadership, sister. "Glee's" not looking so bad now, is it?

Almost every person who has children has a story about his or her kid firing off an inappropriate word or two. When my elder daughter was Tripp's age, she liked to pretend to be mommy working at her desk. It involved sitting in front of the computer screen, squinting and yelling "GODDAMMIT" and "ASSHOLE." Kids mimic what they hear. Precisely because of that, profanity can be an opportunity. Our job as parents is to teach our children the power of our words, and the reasons why they have an effect. One of my 12-year-old daughter's favorite films is "The King's Speech," an R-rated movie that features a cavalcade of F-bombs. They illuminate the character and his struggle. They make sense. I don't want my kids to be pottymouths, but I do want them to understand, on a daily basis, why certain words shock. Why certain words are effective. And why certain words hurt.

That's why, in the lexicon of bleepable phrases, slurs are a whole different shade of blue. There's a world of difference between a sure-to-be-repeated "SONOFABITCH" when you stub your toe and the casual bandying about of a homophobic insult. Sure, Tripp's mother and his aunt are just a pair of barely post-adolescent girls, who move in a world in which "Your gay" [sic] still qualifies as a devastating retort. But guess what? They still don't know whether little Tripp, in the fullness of time, will reveal himself as oriented toward females or males. So they need to pull it together to work now on creating a nurturing climate now that doesn't include hateful words for gay people. They need to consider not just the tantrum-throwing 3-year-old he is now but the adult he will someday be. An adult who might be gay. And  even if he's straight, he will live and work and, one hopes, have friendships with people who are not. A world that needs future men who don't call people "faggot." And young women who don't, either.

Update: On Patheos Monday, Bristol Palin wrote that she was "setting the record straight" on her son's outburst, claiming that "Sadly, he used a different 'f word.'" She added, "I guess the temptation to label my three year old son is just too great for the lefty papers to resist."

You can watch the clip again and judge for yourself what the young man appears to be saying. It certainly does appear to be a two syllable word and not a four letter one, though we'll take Palin at her word that it's not "faggot."