Will Wall Street turn on its own over Libor?

With Wall St. crooks unlikely to go to jail, our best hope is that the big banks sue each other into humiliation 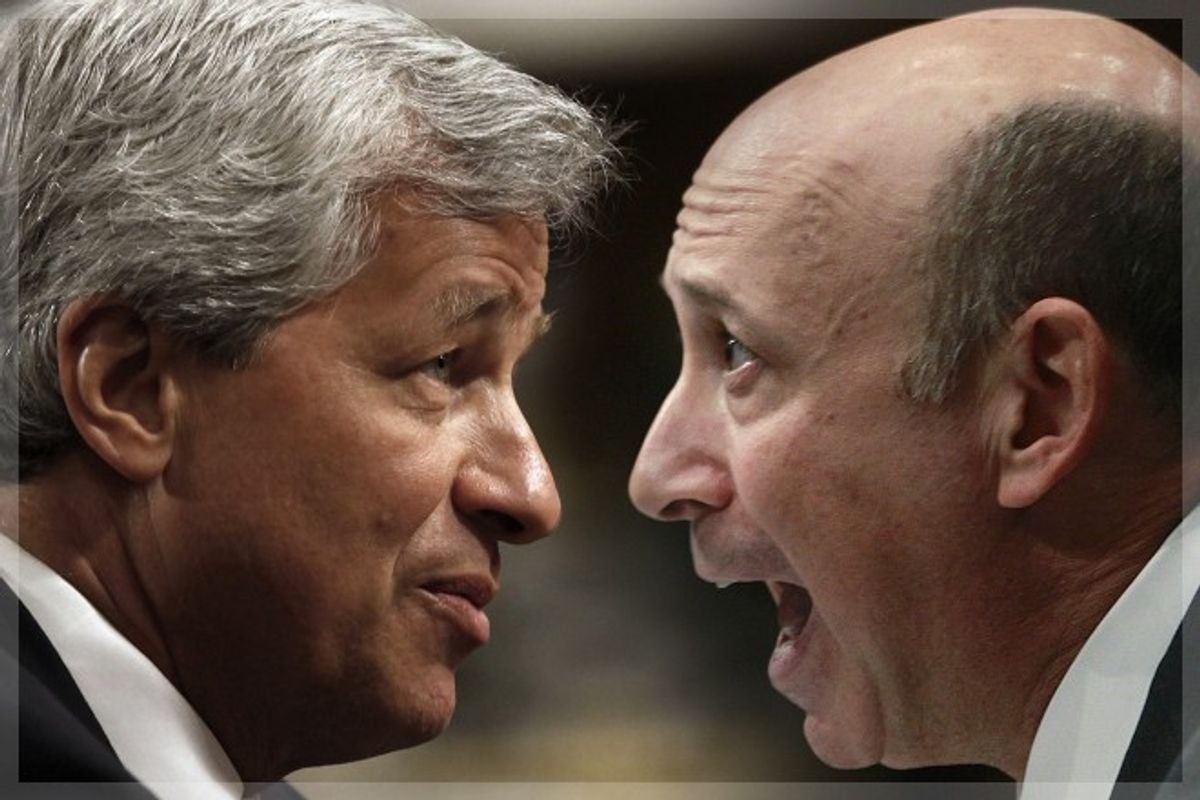 What's easy to miss in the story of Barclays' attempted manipulation of the Libor -- see here for what the Libor is and why its manipulation is a Big Deal -- is that Barclays itself highlighted its malfeasance by coming clean and settling with regulators. Thus, they've borne the brunt of the furious response from legislators and citizens in two nations, even though it's been known for some time that ... everyone was doing it. Or, at least, a bunch of other banks did the same thing -- we don't yet know for sure which ones and to what extent because no other bank has agreed, as Barclays did, to admit involvement.

The other banks still under investigation have, according to a Reuters report, strongly considered all jumping into the pool at the same time and trying for a group settlement with regulators. The regulators like the idea because it will involve a great big number and a big list of names. The banks are warming to the idea because the big list of names means no one firm gets the Barclays treatment for a week or three. In other words, settle quick and hope no one digs too much into how much criminal activity each member of the family is responsible for.

Here's where, maybe, Goldman Sachs comes into the picture. Because according to a Bloomberg report, Goldman -- uninvolved in setting the Libor -- is considering taking the law into its own hands and taking care of this Libor business with suits against the firms responsible. Like a fictional comic book metropolis, the financial industry is dreadfully underpoliced, and many of the cops are themselves on the take, so, logically, what Wall Street needs is a morally dubious but incredibly wealthy figure to operate outside the law to achieve order by any means necessary. That's right: Goldman Sachs is going to become the Green Arrow. (Or the other one, I guess, with the movie.) Except still basically pretty evil.

And they even have a Speedy (or Robin, FINE) in Morgan Stanley. From Bloomberg:

Goldman Sachs Group Inc. (GS) and Morgan Stanley (MS) are among financial firms that may bring lawsuits against their biggest rivals as regulators on three continents examine whether other banks manipulated the London interbank offered rate, known as Libor, said Bradley Hintz, an analyst with Sanford C. Bernstein & Co. Even if Goldman Sachs and Morgan Stanley forgo claims on their own behalf, they oversee money-market funds that may be required to pursue restitution for injured clients, he said.

Because Libor is based on submissions from only some of the world’s largest banks, the probes threaten to pit firms uninvolved in setting the rate against any implicated in its manipulation, Hintz said. Libor serves as a benchmark for at least $360 trillion in securities.

“This will be a feeding frenzy of sharks,” said Hintz, who has served as treasurer of Morgan Stanley and chief financial officer of Lehman Brothers Holdings Inc. “We’re going to have Wall Street suing Wall Street.”

That sounds ... too incredibly wonderful to be true, doesn't it? Apparently Goldman said last month that it would consider itself an "aggrieved market participant" if it turns out that its Libor-setting rivals were screwing with the numbers -- which they were.

In the absence of effective regulation, with the unhappy likelihood that no one (or at least no one important) will actually go to jail over widespread fraud and conspiracy, the best we can hope for is that the bastards will sue themselves into submission and humiliation (though most likely not bankruptcy). If the banks involved in Libor manipulation -- supposedly dozens, including Citigroup, HSBC, Deutsche Bank and JPMorgan Chase -- end up reaching a joint settlement with Britain's Financial Services Authority and America's Commodities Futures Trading Commission, they will all hand over a chunk of cash that they will barely miss and probably give a couple of scapegoats an early retirement, but their settlement will essentially make top executives immune to actual prosecution. The Justice Department considers the settlement -- and not a full, public airing of the extent of the misdeeds and the identities of those responsible for them -- the end goal. Megabanks would confirm that they can get away with murder if they pay the equivalent of a parking ticket. (You know how it is: Moral hazard is only a thing we have to worry about with poor people!)

So in that scenario (and the group settlement is far from a done deal: If some banks [*cough cough* CITIGROUP *cough cough*] behaved much worse than others, it might be in everyone else's interest to let them hang alone and not hang together), a big screw-you lawsuit from Goldman might end up being our best bet to learn the truth and see the perpetrators punished. On the other hand, Goldman might elect to respect financial industry Omerta and keep the whole thing quiet:

Banks such as Goldman Sachs and Morgan Stanley would prefer to settle quietly out of court and may forgo claims altogether unless additional firms are fined like Barclays, said James Cox, a securities law professor at Duke University in Durham, North Carolina.

As a Morgan Stanley analyst says, they wouldn't want to "exacerbate negative headlines for the overall industry" by suing their rivals. Because it's of the utmost importance that the reputation of an industry that exists to rip us off and periodically blow up the world economy be salvaged. Can you imagine the disaster it'd be if people lost their faith in the financial sector?

If jail time for everyone is out of the question, and Goldman won't play vigilante, my other suggestion is some sort of hand-to-hand combat scenario, possibly involving a cage or some sort of "Thunderdome," in which Citigroup's Vikram Pandit, Goldman Sachs' Lloyd Blankfein, JPMorgan Chase's Jamie Dimon, ex-Barclays head Bob Diamond, and whatever goober is in charge of Morgan Stanley enter, and only one bloated useless plutocrat leaves!