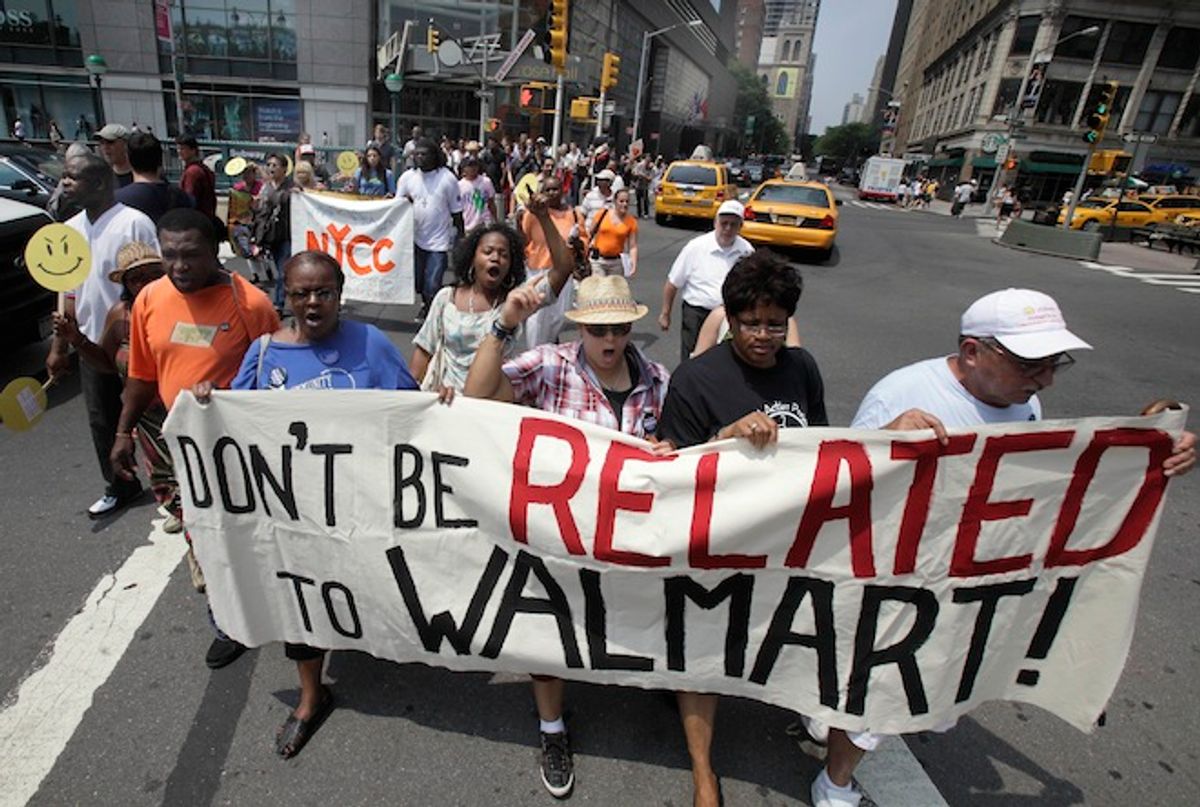 As Wal-Mart celebrates its 50th anniversary this summer, it has faced a new wave of resistance from its “associates” -- the company’s corporate-speak for employees. Last month, a delegation of Wal-Mart workers brought their grievances to the company’s shareholder meeting, including low wages and understaffing. In interviews yesterday, three workers at the forefront of the campaign told Salon the company has punished them for their activism. Critics say that the world’s largest private sector employer is playing dirty once again.

Last June, nearly 100 Wal-Mart employees announced the formation of a new membership organization called OUR Walmart, which demanded improvements on the job. Though backed by the United Food and Commercial Workers union, it hasn’t sought union recognition (UFCW also backed a previous non-union organization of Wal-Mart workers in 2005). OUR Walmart currently claims thousands of Wal-Mart workers in hundreds of stores as dues-paying members. As its efforts have escalated, OUR Walmart leaders say Wal-Mart has targeted them for punishment.

Most prominent is Girshriela Green, one of the founding members who presented OUR Walmart’s demands to a senior Wal-Mart vice president outside corporate headquarters last summer. After joining Wal-Mart as part of a “welfare to work” program in 2009, Green had been promoted multiple times, most recently to department manager, a position she says paid $9.80 an hour and – due to understaffing -- required a huge amount of physical labor, including manually moving 100 heavy boxes a day. Green said management at her Crenshaw, Calif., store would “tell associates at least twice a week that they were replaceable … They had us working in fear on a daily basis.”

Eventually, Green had to go on medical leave. She was on worker’s compensation and wearing a neck brace when a UFCW organizer called her at home and invited her to help start OUR Walmart.

Over the past year, Green has been quoted in the media, met with politicians and swapped stories with other Wal-Mart workers. At Wal-Mart’s shareholder meeting, she and three other OUR Walmart members introduced a shareholder resolution restricting executive bonuses, presented a petition calling for CEO Mike Duke and board Chairman Rob Walton to resign, and shared their message with hourly Wal-Mart workers who had been flown to the meeting by management. Green said she was “really excited” that, despite their differences, Duke and Walton each “had enough decency” to shake her hand.

But that excitement didn’t last. After taking medical leave for over a year, Green was expecting to return to work at Wal-Mart this month, in a position she said had been agreed to by her store manager and a mutually selected doctor. Instead, Green said she received a letter from corporate headquarters, dated July 6, saying that there was no position available that met her medical restrictions, and so she was being terminated. The weekend before, Green had addressed a crowd of thousands at a Los Angeles rally billed as the largest Wal-Mart protest in U.S. history.

“It’s too much of a coincidence,” said Sarita Gupta, the executive director of the pro-labor organizations Jobs With Justice and American Rights at Work, “that here she is, she speaks at a mobilization on June 30, she’s quoted in the press, and then a few days later she gets notice [of termination].” Gupta, who’s participated in protest actions with OUR Walmart members now alleging retaliation, said that after waiting to see if the organization “would take root,” Wal-Mart has chosen “to retaliate against some of the key leaders and voices.”

Wal-Mart spokesperson Dan Fogleman said he was “not familiar with the details” of Green’s case, adding, “We never take a decision to terminate someone’s employment lightly, but we do need to hold our associates accountable for performing their job, regardless of whether or not they’re affiliated with a group.”

In addition to Green, another worker who signed the shareholder resolution says the company has retaliated against him. Carlton Smith, a 16-year employee in Paramount, Calif., claims that in May (well after the resolution had been filed), Wal-Mart issued him “a third-level written [warning]. So if I sneeze, I can be terminated.” According to Smith, Wal-Mart said he was being disciplined for entering product info into a database at the wrong point, but he was following prior instructions from a manager. Smith said that because of his leadership in OUR Walmart, managers have also been taking photos of his work area: “They’ve really got their eyes on me because I’m so vocal.”

“We will listen to his concerns and act on them as appropriate,” said Fogleman. Green said Wal-Mart is “making leaders of OUR Walmart examples of, 'if you join this association, this can happen to you.'”

Angela Williamson says Wal-Mart is making an example of her, as well. Williamson joined OUR Walmart because she thought it would mean “more backup and more of a voice.” Williamson became an OUR Walmart activist, leafleting outside her store in Gulf Breeze, Fla., posting comments on Wal-Mart’s Facebook page and organizing co-workers to object when management in her store told employees to take longer unpaid lunch breaks in order to reduce their hours.

In February, Williamson says management at her store held a mandatory meeting devoted to criticizing OUR Walmart; she spoke up in the meeting to dispute accusations and declare she was a member. Asked about such meetings, Fogleman said that Wal-Mart maintains a “direct line of communications with our associates,” which he said has helped in "building relationships with them," which is "part of the reason that time and again they’ve rejected unionization.”

After that meeting, Williamson said several co-workers told her, “Oh, they’re going to fire you.” In May, Wal-Mart did. “They just want to keep us separated so they can continually intimidate us and under-staff us, and not have to hear anything about it,” said Williamson.

Fogleman said that Williamson’s firing “is as simple as repeated absences from work.”  According to Williamson, Wal-Mart has shifted its story about which missed shift led to her termination, and is now citing a shift she spent in the emergency room with a kidney infection.

Williamson and Smith have filed National Labor Relations Board charges alleging illegal retaliation by Wal-Mart; Green said she is pursuing legal action against the company. All three have continued their activism. But Williamson said that her firing has chilled her co-workers: “It’s really hard, because they’re so intimidated right now.”