As her dark, two-episode arc on "Louie" ends, the actress reflects on the ways men try to change women 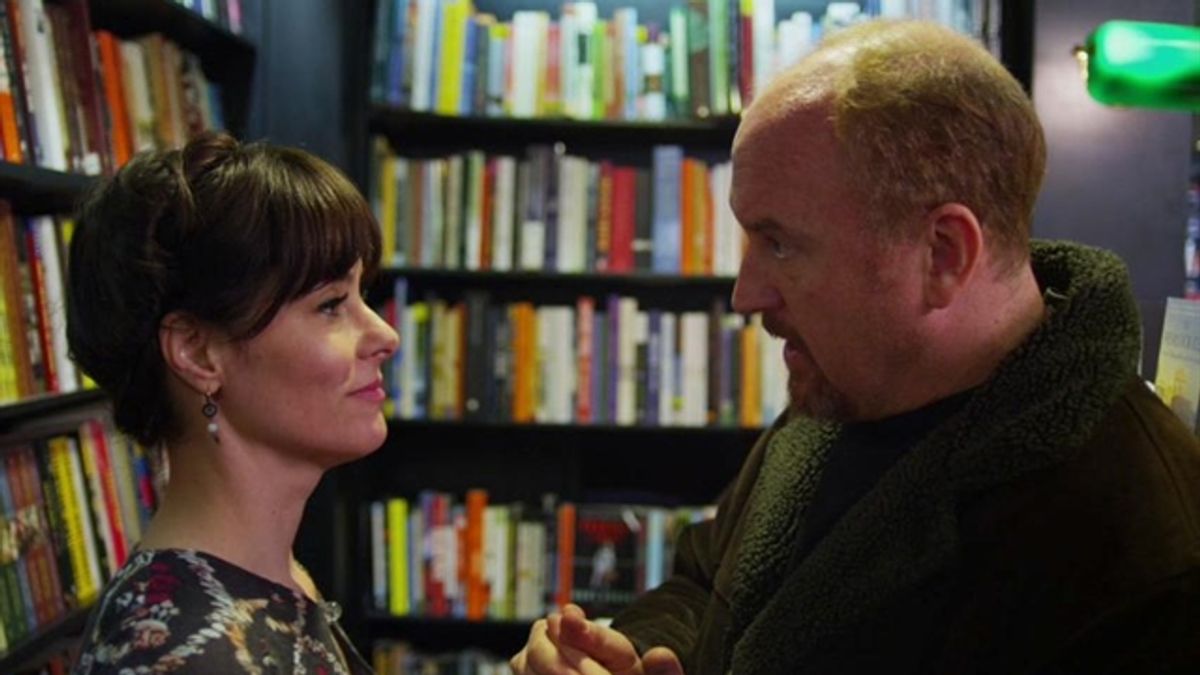 Last week on "Louie," Louie met a fetching, adorable bookkeeper, played by Parker Posey, and asked her out on date. On last night's episode, they went on that date, and what seemed like it might be a cute, lighthearted romantic comedy-inflected storyline got much more complicated. Parker's character turned out to be both darker and more complex than Louie guessed, energetic but also sad, possibly an alcoholic, and carrying around an untold amount of psychic baggage. As the two walked around the city on a long date that included stops at Russ & Daughters, a clothing store where Louie tried on a dress, a pharmacy where they bought a prescription for a homeless man, and a trek up to the rooftop of a skyscraper, they revealed and hid themselves from each other.

I spoke with Posey about the two episodes, her character, the way people can surprise you -- and how Louie was being a creep.

Were you a “Louie” fan before appearing on the show?

I had just seen clips before I did the show. I met Louis when we did a benefit reading for the school where his kids go. We did it right before the holidays to raise money for the school and there was a little party just next door to the theater, and we all sat around and had a few drinks, and he said, "I think I'd like you to play my therapist on my show," because I was playing a therapist in the reading, and I was like "that would be great!”

I couldn’t wait, because I thought what he was doing was something that was missing on television. And a couple of days later we hung out and then he went into his cage and came out with these episodes.

In which you are not playing his therapist.

It's interesting, because I think in a way she's a therapist for him. She's a lot of different people. She’s the one that's changing him, waking him up to something, getting him out of his head and seeing something. You're always wondering if Louie’s going to see what's in front of him. She is trying to help him.

Over the course of the two episodes the character changes a lot, as we learn more about her. The first episode she seems to be this very adorable bookseller, and then we learn she’s much darker, sadder and complicated than we, and Louie, imagined.

Yeah, this idea that people aren't who we think they are when we meet them, and there's actually a lot more to them than we could ever imagine, and what's attractive about that? You meet someone and you're like, "Oh my god, this guy's together on the outside,” and then on the inside, you know, is a haunted house. It's a haunted house and you can't imagine what happened to them as a child. I think it's kind of true to life this idea of meeting someone and having them be much more passionate and dynamic than you could ever imagine. You don't really know how a person's going to affect you.

When you were reading the script, did you know your arc, or were you surprised at how sad the character became?

You know, I don't remember. He was explaining it to me just as stories that he'd heard from his own life about this girl who was sick. The core came from a real person who had this outlook on life, to live in spite of what’s going on inside of her, this joie de vivre. She goes about her life trying to instill this desire in people. And then there’s Louie, this character who doesn't even want to run up a flight of stairs. And she's the one that's changing him.

But even though there is the joie de vivre, there’s also so much sadness. In the scene on the roof at the end of the episode she says, “I'm having too good a time” to consider suicide, but then her face falls, what was going on in that moment?

She's haunted. That’s what you see in that moment is not someone pretending so much but, you know, something that came up that made her shut all the doors. That kind of depth of pain in someone can be very real, and the happiness and the force that you see in how much she wants to live and connect is medicine. She’s reaching out. All of that is to save herself. You heard about her cancer, right? She tells him everything, she really opened up.  And I don’t know if you've ever seen this, but a person can frost over. Like, I said too much!

Good. That's great. I think it’s great, it sounds like you liked it. As a woman it's like, Thank god for "Louie" and Lena and “Girls.” In comparison with most of what we have it's like, it's so dynamic, it's so compelling and this breath of fresh air. But in a really classic way. It’s like little 22-minute independent movies.

In the episode, it seems like she has a much better handle on who Louie is than on who she is. Does he see her, or does he just see this woman who he thinks is out of his league?

I think guys can think, how do I learn to dominate someone who is hot? That is what these guys can do. But women are different and her attraction to Louie isn't just to what he looks like, it's that he's funny and that's what's attractive. But then the way that he's being funny is — he doesn't see her at all! And I think she goes out on this little journey with him to play a part, to lose herself. I mean she has the potency in this situation. But he doesn't see her at all, at all. Some of these guys can't see past their nose.

He’s too wrapped up in his own insecurities to really look at her.

And he's a creep too!

You don't think he's a creep? He's like skulking in there in a bookstore? Are you kidding? He's telling her who she is! It's somewhat sadistic, right? I mean he's already written her dialogue for her. He comes up to her and he's talking and what he's saying is just like a mouthful of what he thinks she's thinking. And she goes, 'Yeah, I'll go along, I'll be your projection,' you know?

You mentioned some of this character was based on a person Louis knew. Were you thinking of a real person?

It feels like Hal Ashby and “Harold and Maude” to me, the tone and what happens when people take each other by surprise, what that connection is and how it happens. It felt like a composite of Ruth Gordon from “Harold and Maude,” and there’s kind of Mary Poppins, Mary Tyler Moore too, like is this for real? Is she for real? What's going on?  What's going on inside of this person? I had no idea! These people you meet in the city that have come from so many places, to reinvent themselves, to reinvent the moment, to change, to transform situations, she’s that. It’s a thing that is very particular to this city. And especially in Woody Allen. People have more dimensions to them than we give them credit for.  The person you meet on the street that you think is someone and it's someone else. I'm mistaken for someone else all the time.

Mm-hmm. Or, like, I met a girl outside of a cafe and I thought she was someone else, and I was like, "Are you ...?" And she said no. Her name was Catherine. And I said, "Here’s someone who is your doppelganger, someone who looks just like you." And she said, “Is her name Elaine?” And that’s who I meant.

And I've had people say things like, “You live in my building.” “No I don't, I promise, my name is Parker.” “No, you don't, you live in my building.” That’s a little different for me because I’m, I don’t know what, a famous person. But people do have that thing, like the scene in the bar is this idea too, that you can be mistaken for someone else here in the city. It can be read as like she's someone who desperately needs to have a drink or not.

Oh, that's interesting because that scene played to me totally like the bartender really knew her and was cutting her off from the previous night, not like she was mistaken for someone else.

I don't know, but I think it's interesting. I'm so happy to play this part. Acting is a really strange thing to do, it's very strange. I love this character, this woman. She had a lot going on. And that’s what people are missing in what they watch; a lot of television lacks who people are, right? And that’s because it’s a formatted genre, mostly procedural, but comedies have a format to them too. But what Louie does is give breadth to characters that he feels are real and funny and sad. She did make me sad.

She made me sad.