Why Mitt screws up 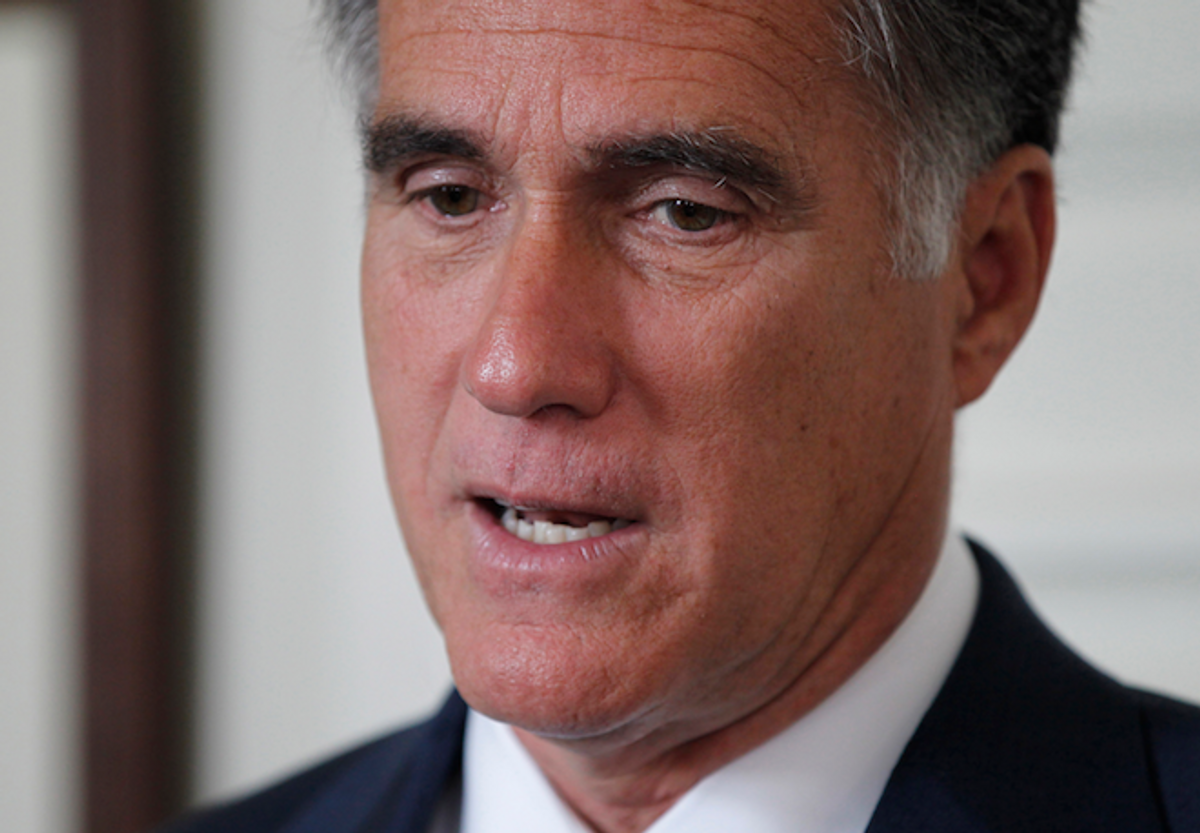 People are asking, "What’s with Mitt Romney’s trip to the London Olympics?" He has made so many gaffes that the Daily Mail’s political editor asked, “Do we have a new Dubya on our hands?”

That question is most important for the American voter. What drove Dubya were anxiety and fear, much of which he masked with his tough-guy swagger and rhetoric – and with his disarming sense of humor. When asked direct questions by the press, however, Bush would often freeze like a deer in the headlights. His slips of the tongue became the stuff of talk-show hosts, magazine articles and even books.

Now we have Mitt Romney, the putative Republican candidate for president in the 2012 election. His gaffes are different from the 43rd president's; they don’t involve mispronouncing words or frequently issuing nonsensical sentences. They are more social gaffes, ones that seem to be made without much thought – if any.  Bush was trying to say things he couldn’t say. Romney is not trying to say anything in particular, other than answer questions or make comments when called upon to do so. In fact he is too casual, and what comes out is often carelessly hostile.

When Brian Williams asked him what he thought about the London games, Romney first tried to answer the question directly – something most politicians usually don’t do. He said, “It’s hard to know just how well it will turn out.” He then began to talk about his own work running the 2002 SLC winter Olympics in what seemed like a canned response. What strikes me is the confidence with which he spoke and the remarkable lack of thought he exhibited. This has become a pattern for him, and not just on this trip. But it is more noticeable than before because he is largely left to his own devices, without prepared remarks that he could use in informal conversation.

That he was mocked and even rebuked by British leaders is less important to me than what lay beneath their criticism. Both the Mayor of London and the British Prime Minister commented separately about what they felt to be Romney's insults regarding how Great Britain was running the games.

Psychoanalysts look for patterns of behavior and the meaning behind those patterns. But we also -- especially in the case of public figures -- look at the pressures brought to bear on the individual, both internally (what I do in my consulting room) and externally (social pressures that affect behavior). In Romney’s case, he is competing in his own Olympics against President Obama, who also happens to be the most internationally popular American leader in generations. So the pressure is on for him to prove himself.

Part of that pressure is self-generated, since a central component of Romney’s claim to greatness is that he ran the winter Olympics in 2002. Thus, he is under pressure to let people know that he can do it better – and he gave that impression in London. He has to prove to himself and others that he is indeed a superstar – especially since he knows he can’t touch Obama in a British popularity contest.

Salon’s Joan Walsh has remarked over the months about Romney’s seeming indifference to answering questions. His casualness led her to use the psychiatric term “dissociated” when describing his style. I think her observations are most trenchant, though it is hard for me to move into the territory of diagnosis.

But what is not hard to do is to think about what most likely motivates this behavior that puzzles so many in the media – including supporters who are frustrated with Romney’s unwillingness to disclose more of his tax returns. I think the force behind this behavior is massive anxiety, pure and simple. He is anxious about revealing who he is and about interacting with people he doesn’t know. He appears to have much less experience than Obama in interacting with people from all walks of life. Basically, he is uncomfortable except within his own family and in the presence of those who share his wealthy background and Mormon faith. There are many ways to defend against overwhelming anxiety, one of which is to act certain about every answer given.

What comes out besides this sense of smiling certainty are signs of anxious contempt toward others – whether it is how the British run their Games or saying that kids who can’t afford college should borrow money from their parents. Put together, these and many similar statements – his pleasure at firing people or his belief that corporations are people (is that why he can comfortably bankrupt some?) – are all evidence of a hostility not dissimilar to stories about his bullying of others during his prep school days. At this stage, I suspect Mitt Romney is too anxious to be an effective president.