From the Muslim witch hunt to Hollywood's "The Watch," the paranoid style still infects our culture 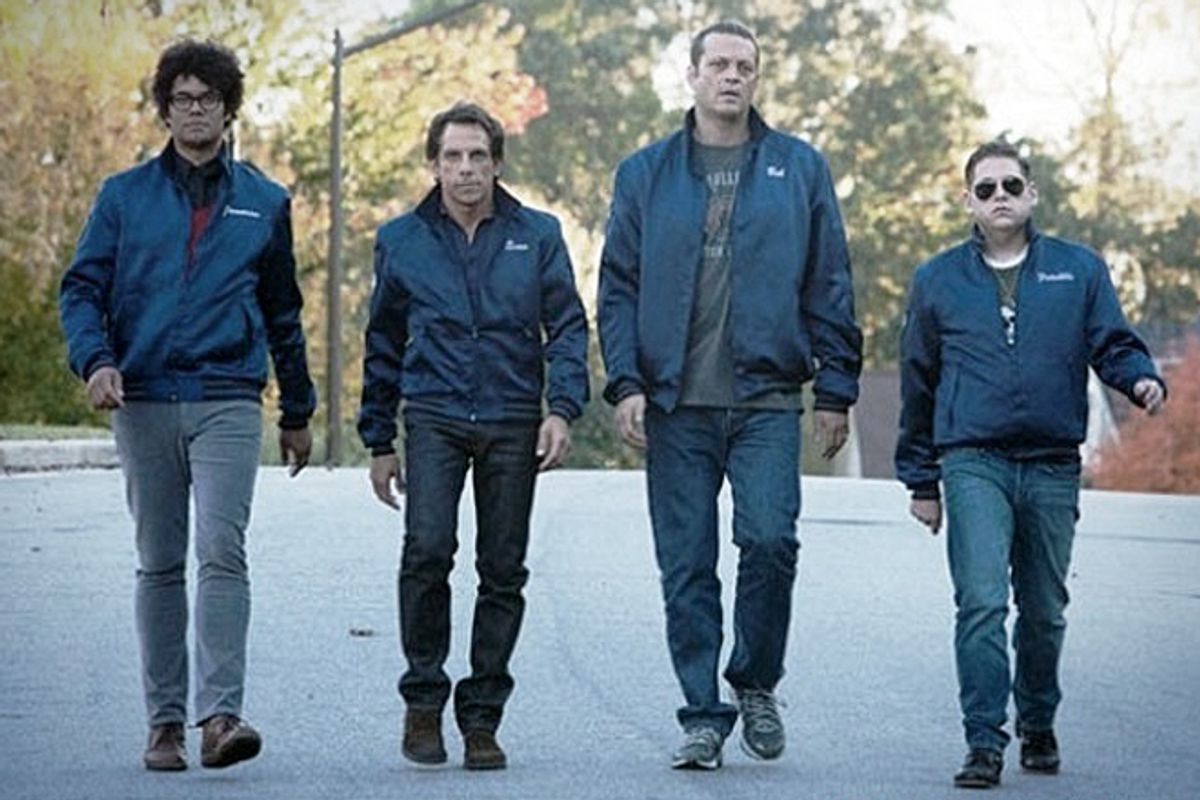 To work in the media and read comments and emails written by strangers all day long is to be reminded of the continuing relevance of Richard Hofstadter's "The Paranoid Style in American Politics." That essay, published 48 years ago in Harper's magazine -- and based on a lecture Hofstadter had delivered at Oxford University in the month that John F. Kennedy was assassinated -- remains arguably the most trenchant observation of the American character written by anyone not named Alexis de Tocqueville or Mark Twain. Nothing that I say about my personal mailbag is likely to surprise you, but it all serves to illustrate the tendency toward apocalyptic and conspiratorial thinking that Hofstadter describes. In the past few days, I've received several emails that explain the shootings in Aurora, Colo., from various perspectives, including by way of the literal truth of the Bible (which also, apparently, informs us that global warming is a left-wing myth) or as a false-flag operation mounted by shadowy forces aimed at discrediting gun ownership and seizing Americans' firearms.

In the essay, Hofstadter makes clear that he's neither qualified nor inclined to offer a psychiatric diagnosis of those who craft nutty conspiracy theories about Masons or Catholics or Communists (or, in our own time, about Muslims or the events of 9/11 or the Kenyan socialist secret agent who occupies the White House). "It is the use of paranoid modes of expression by more or less normal people that makes the phenomenon significant," he writes. I'm tempted to suggest that American public life has left the realm of the "more or less normal" far behind in the decades since 1964, but that's probably unfair (and might, indeed, be an example of the paranoid style in action). It's perhaps more accurate to say that where Hofstadter was primarily concerned with political discourse, the cognitive dissonance of the paranoid style has spread far and wide in American society, including into many areas of so-called private life.

We live in a country, after all, where significant pluralities of the population refuse to accept the worldwide scientific consensus on climate change and fervently continue to believe in the superiority of a piecemeal, private-sector healthcare system despite ample evidence that Americans spend more for medical care, and have poorer outcomes, than people in any other major Western nation. The cultural and geographic isolation of the United States has a lot to do with this, as do the failures of our education system, but those explanations aren't quite sufficient. One aspect of the paranoid worldview is a sense of immense self-importance: The CIA has chosen you for secret experiments, or you and your Internet friends are the only people who can see that the Obama birth certificate seen and touched by independent experts is an obvious fraud. In the United States, we cling to this sense of specialness on a manic, nationwide, tautological scale; the way we do things in America is clearly superior because we know we live in the greatest country in the world.

This week brings us a new Hollywood comedy currently called "The Watch." It's a mildly amusing study in American paranoia that has had the misfortune to be twice undercut by tragedy. Originally titled "Neighborhood Watch," this suburban ensemble farce directed by longtime "Saturday Night Live" writer Akiva Schaffer was delayed and retitled after the Trayvon Martin shooting in February in which an especially zealous, self-appointed neighborhood guardian in Sanford, Fla., named George Zimmerman killed an unarmed teenager. We don't really know what factors drove Zimmerman's behavior, but it seems highly plausible that he followed a train of paranoid reasoning involving young black men and their outerwear fashions to conclude that Martin was more likely to be a dangerous criminal than a kid on his way home from 7-Eleven.

As Hofstadter notes, people who employ paranoid reasoning are often reacting to a real stimulus, distorted though it may become. There were definitely some Communist agents within the U.S. government in Joe McCarthy's time, and we shouldn't let Michele Bachmann's hysterical Muslim hunt obscure the fact that there are real-life Islamic terrorist groups. Much of the discomfort surrounding the Trayvon Martin case stems from the fact that young black men appear to commit a disproportionate number of crimes, or at least to be charged with and convicted of crimes at a disproportionate rate. It's also true that they are vastly more likely to be stopped and frisked by police for no particular reason, and vastly more likely to be unemployed, than their peers of other races. It's how you perceive the relationship between those facts that determines your attitude about the case.

You can see why the studio releasing "The Watch" chose to hold off: The film features a tightly wound, gun-toting character (played by Jonah Hill) who's obsessed with law enforcement but was rejected by the local police department after "failing the written exam. And the physical exam. And the mental-health exam, whatever that is." Hill's character yearns to turn the neighborhood watch into a violent vigilante unit, despite the assurances of Costco manager Ben Stiller and party boy Vince Vaughn that that's not what they have in mind. Whether or not that's what George Zimmerman is really like, that's how many of us imagine him. And now that "The Watch" has been repackaged and more or less separated from the Martin case, it's being released in the immediate wake of the Aurora shootings on what many expect to be the weakest box-office weekend of the summer. Maybe it's nothing more than superstition that will convince many people to stick with dinner and skip the multiplex this weekend, but you really can't blame them.

I'm not making any grand claims for "The Watch," which is a miscellaneous collection of raunchy, guy-oriented gags strung out along a plot that seems borrowed wholesale from the British indie hit "Attack the Block," but without any of its juicy social context. (I realize that may count as a spoiler, but this isn't much of a movie review, and there's precious little to spoil.) Schaffer and his writers (Jared Stern, Seth Rogen and Evan Goldberg) assiduously avoid any troublesome racial or ethnic issues. The murder victim who inspires Stiller to form the neighborhood watch is a Latino security guard at his Costco store, and comic Richard Ayoade is on hand to supply a double dose of otherness by being simultaneously black and British. As so often happens, the tremendous Rosemarie DeWitt steals every scene she's in as Stiller's wife, although the script gives her little to do.

But what I most appreciate about this rather silly movie is that it accidentally makes the claim that Americans are paranoid about the wrong things, which is precisely true. Stiller's character says that the purpose of the neighborhood watch is to monitor "any and all suspicious activity and generally get to the bottom of things," and his suspicions extend to the crazy old coot with a shotgun (noted Obama-hater R. Lee Ermey), the possibly gay guy across the street who keeps checking him out, and the town's mustachioed, incompetent cops. But since the social fabric of Glenview is being undermined not by criminals or gays or vengeful homeowners or corrupt officers of the law but rather by a full-fledged alien invasion, the paranoia gets kicked up to a galactic scale. One of the basic tenets of the paranoid worldview is that there's a grand scheme underlying history that connects apparently unrelated events, with a nearly infallible master intelligence behind it all: the Jewish bankers, the Bush family, the New World Order elite. One of the neat things about an alien-invasion scenario is that it offers a screen on which to project these fantasies without seeming unhinged.

Like the characters in "The Watch," most of us don't notice, most of the time, what's really going on. I'm aware of the hazards of the paranoid style, but let's try this: Despite the overheated partisan rhetoric on both sides, electoral politics in America has become far more a matter of style and symbolism than it was in Hofstadter's day, when the choice between Lyndon Johnson and Barry Goldwater offered vastly different views of government and America's place in the world. I'm not saying there are no important difference between Barack Obama and Mitt Romney, although one could argue that American governance has become so paralyzed that the differences won't matter much in practice.

I am saying, rather, that successive Democratic and Republican administrations, with the help of Supreme Court justices who allegedly span the ideological spectrum, have eagerly collaborated in gutting the Constitution and creating a technology-driven national security state with beefed-up super-secret executive powers, which isn't something that anybody on the left or right ever consciously voted for. Almost all of us carry devices that allow us to be tracked by the government or unknown private interests wherever we go. Of all the social changes the Internet age has wrought, perhaps the biggest is the complete abandonment of any expectation of privacy, which was considered an unassailable personal right even 20 years ago. I could suggest that this situation threatens to make democracy untenable, or even irrelevant -- but that might sound paranoid.