It's here, America -- our own culture war holiday 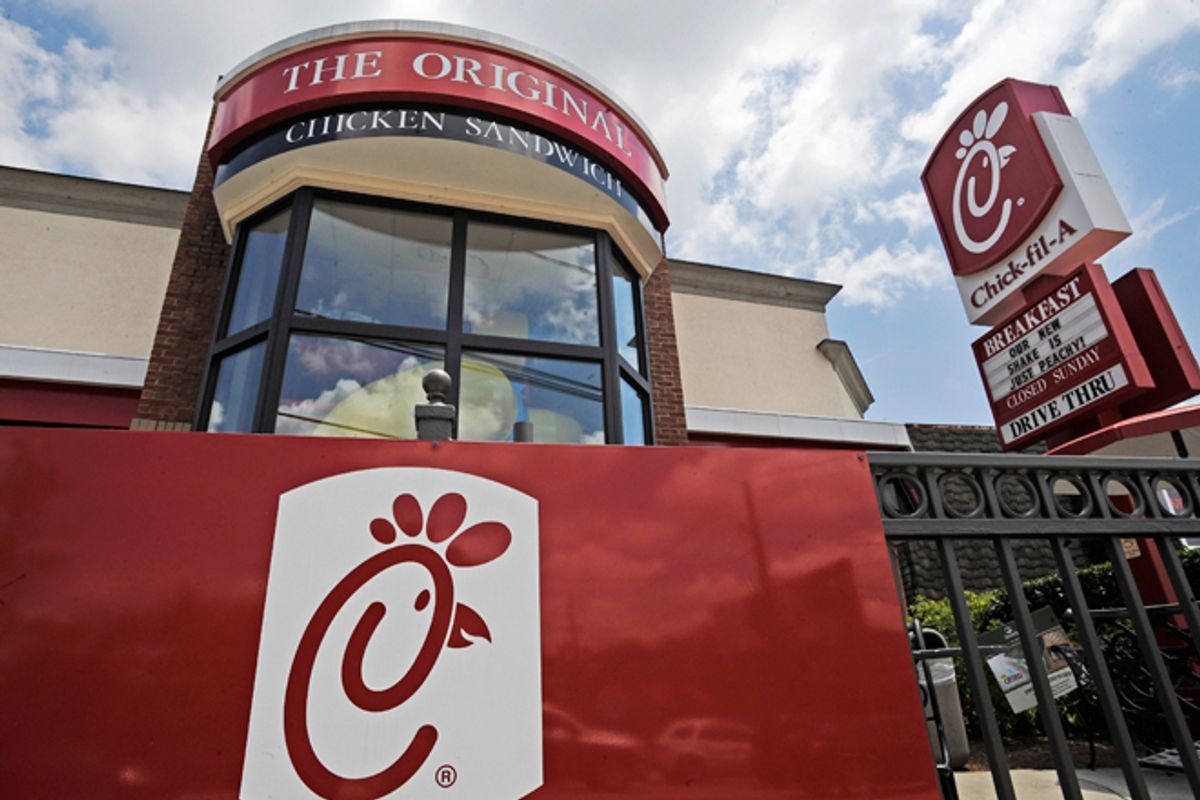 Happy Chick-fil-A Day, America! Or, as it will someday be officially known, Culture War That Came With Waffle Fries Day.

It's been quite an exciting time ever since Chick-fil-A president Dan Cathy admitted earlier this month that he was "Guilty as charged" about his company's supportive position for "the biblical definition of the family unit." Guilty -- of loving everything this country stands for! Faster than you could say, "Would you like coleslaw with that?" that food court outpost of breaded poultry found itself smack in the middle of the fight for America's soul.

The great battle of Chick-fil-A has drawn responses both sensible and stupid from a variety of corners. On the liberal-yet-kinda-dumb side, there's Boston Mayor Tom Menino, who, in a well-intentioned but ultimately ironic display of liberal muscle, declared, "You can't have a business in the city of Boston that discriminates against a population." Dear Tom: Expressing one's beliefs is not discrimination. Also, announcing your intention to block someone from opening a business in your town because you don't like his beliefs is discrimination. See also: New York City Council Speaker Christine Quinn, who this weekend sent a letter to the president of NYU, saying, "I do not want establishments in my city that hold such discriminatory views. I urge you to sever your relationship with the Chick-fil-A establishment that exists on your campus. This establishment should be replaced with an establishment where the ownership does not denigrate a portion of our population." Quinn's statement was a direct contradiction of her mayor Mike Bloomberg's assessment that banning eating establishments is "just not government’s job." It was also, for millions of New Yorkers, the first we'd ever heard that the city even had a Chick-fil-A. Quinn has since dialed back on her comments, saying, "I don’t want businesses that hold discriminatory views and feelings, but I don’t have any legal recourse or reason to block this company." Nope, all she can do is write enticing messages on her official letterhead asking the company's local landlord to throw them out.

Meanwhile, over on the conservative side of the hen house, it's been old home week for right-wing attention whores. Posing with a bag of chicken has, for a moment, become the new posing with an American flag. Why look, here's Texas Lt. Gov. David Dewhurst, supporting values of both the family and meal variety. Here's – wait for it – Sarah Palin, pausing long enough before any grease could leak through the bag to give a victorious thumbs up. And here's windbag-at-large Rick Santorum defending the company against "intolerance and bigotry" that's obviously a result of the way we're "fundamentally changing the moral foundation of our country."

But the real champion in all of this has been former governor, marathon runner and occasional overeater Mike Huckabee, who masterfully came up with the idea of declaring Aug. 1 Chick-fil-A Appreciation Day -- a day for Americans to "take a stand for the Godly values we espouse" and fight the "vicious hate speech and intolerant bigotry from the left" by patronizing their local franchises. What better way to show the world that you support free enterprise – and traditional, biblical marriage – than by going out and purchasing a tray of mouthwatering cinnamon clusters? Sometimes, all that stands between the principles our Founding Fathers fought for and the homosexual agenda is a char-grilled wrap and a Dr. Pepper.

The effort seems to be a rousing success in certain quarters -- Huckabee's camp has been posting plenty of photos on Facebook of Chick-fil-A's with lines out the door, evidence that, as one supporter put it, "God is still in the hearts of many!!!" Well, God and a stent if you keep eating all that Chick-fil-A, guys.

Though Chick-fil-A issued a statement last week that "We don't claim to be a Christian business," the company never shied away from putting its beliefs where its wallet is. In 2010 alone, its Christian-based foundation Winshape donated $1.9 million to anti-gay groups like the Marriage & Family Foundation and Family Research Council. It's fair to say that the company has been very clear, financially and philosophically, on where it stands on equality issues. But does that fact alone mean that the company is practicing what Tom Menino calls "discrimination," that it's been unfair to its employees or its patrons? No. It just means it has seriously crappy values.

So what can we, the not crappy, do about it? We can start by not being annoying and not standing outside chicken joints and yelling. We can remember that in America, having different – even stupid and wrong – beliefs is allowed and it's not a basis for trying to run a business out of town. Instead, here's a thought: Don't go to Chick-fil-A. A family-founded company with deeply entrenched religious values is not going to turn all Starbucks and same-sex supporting on us. Show your support for companies like the Henson Co., which exercised its right to cease doing business with an organization not in line with its own values. Patronize establishments like Schnipper's, which has offered to donate $1 from every chicken filet sandwich it sells this month to Marriage Equality USA. Be sane and civilized. That's what true freedom and productive dialogue and effective change look like. So just let Chick-fil-A go. They'll get the message -- we   can't stomach them.