Will the world's taste for sushi kill the oceans?

As the taste for raw fish spreads to India, China and Eastern Europe, the "sustainable sushi" movement emerges 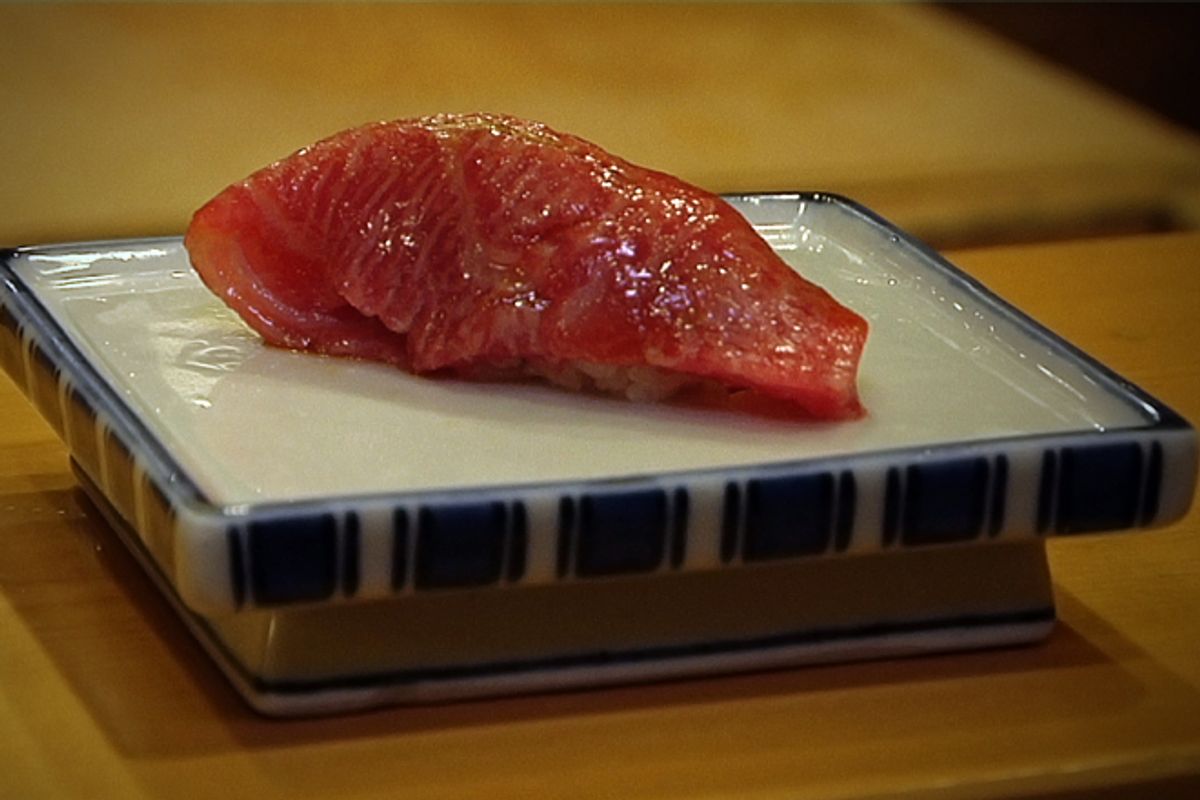 A still from "Sushi: The Global Catch"
--

When you see the enormous frozen bluefin tuna unloaded by the score at Tokyo’s historic Tsukiji Fish Market, it’s like an action scene, and not a bloodless one either. Ovoid carcasses the size of hogs and as hard as bowling balls come sliding out of trucks to hit the pavement with a satisfying, hollow thunk. As the market’s expert buyers begin to inspect the fish – which may have been locally caught, but are just as likely to come from the oceans off Australia or Canada -- for freshness, fat content and flavor, any sushi lover is likely to imagine how they will taste once sliced into delicate morsels and served with preserved rice, dried seaweed and blindingly hot wasabi.

Unlike most issue-oriented documentaries about the abundant idiocy of the human species and the imminent demise of our planet, Mark S. Hall’s “Sushi: The Global Catch” offers foodies and sushi buffs a refreshing palate-cleanser before the parade of experts and the dire news reports. (A YouTube trailer for the film is posted below.) In addition to interviewing Japanese fishermen, fish traders and high-end sushi chefs upholding a centuries-old tradition, Hall travels to a football game in suburban Texas and the Polish city of Lodz to demonstrate the global explosion of what was once (at least outside Tokyo) an eccentric and/or ethnic specialty cuisine. We learn about the stroke of entrepreneurial evil genius that is Sushi Popper, pre-sliced sushi rolls served in a Pringles-type can with a push-up apparatus. (The cucumber roll looks great, but the so-called California Roll contains a panoply of truly frightening ingredients.)

Only gradually does Hall shift his focus to the question of the startling supply chain behind the Hamachi or Tekka-maki you ate last night – which might easily involve a fish that has traveled around the world twice since being caught – and the bigger question of what this means for the future of the oceanic ecosystem. On this particular issue, there aren’t many deniers or skeptics: Fishermen and activists alike tell Hall that those big bluefin tuna are fewer and smaller than they’ve ever been, and the laws of supply and demand have responded accordingly. Last year, one large fish was auctioned at Tsukiji for around $400,000, a new record. Depending on where you are in the world and who’s doing the counting, bluefin populations are believed to have fallen by 60 to 80 percent, with no end in sight.

Maybe the invisible hand of the market will slow the devastation of the bluefin – but with a taste for sushi now emerging among the newly affluent elites in Shanghai and Mumbai and other developing-world metropolises, it’s no good counting on that. As one scientist in the film explains, the loss of a top-level predator like the bluefin could throw the entire web of marine life into chaos, leading to unpredictable cycles of boom and crash among many smaller organisms. International controls on bluefin fishing are inadequate, toothless and widely ignored; many observers (as in “The End of the Line,” an excellent 2009 documentary on the global costs of overfishing) believe that the species will likely be wiped out, or nearly so, before a worldwide ban on catching and eating it becomes practicable.

Hall and many of his interviewees want to paint a more optimistic picture, which is, at least, probably good politics. I’m certainly not qualified to judge it on scientific grounds, but despair is a poor motivator when you're trying to change people's behavior on a large scale. And in this case consumer behavior can make a huge difference where governments have failed, or so the argument goes; if diners, restaurateurs and the seafood industry can wean themselves off bluefin and other declining species, and learn to appreciate a wider range of more sustainable fish, the bounty of the oceans can be extended into the indefinite future. Hall even suggests we may not have to give up the bluefin’s admittedly delicious flesh altogether: While the Australian tuna-ranching industry, in which juvenile tuna are caught and fattened alive in oceanic pens, is highly controversial on many levels, at least it's tightly controlled. That's clearly the wave of the future, if not the present, in terms of the international sushi market. Furthermore, one ambitious Aussie entrepreneur has established an actual tuna farm, in which bluefin are raised from eggs to marketable adults in huge indoor tanks, something never before accomplished. (Again, I do not doubt there’s a downside here, but in purely economic terms it seems inevitable.)

Author and activist Casson Trenor, leading guru of the sustainable sushi movement, is having none of that. He doesn’t serve bluefin at the mini-chain of sushi bars he runs in San Francisco, although you can order both pole-caught albacore and skipjack tuna (which taste quite different), along with farm-raised Arctic char from Iceland, wild Norwegian mackerel, diver-caught California sea urchin and shrimp farmed in Texas. It all sounds scrumptious and delightfully guilt-free (and his prices are honestly not too bad), but does anybody really believe that three San Francisco restaurants can make a difference, any more than you and I deciding to drive Priuses (Prii?) instead of Escalades can stop the greenhouse effect?

Nobody does, and not Trenor either, but there’s a real counter-argument to be made here. It’s better to do something than nothing, on both a philosophical and practical level, and let’s remember that the environmental movement of the ‘70s, the organic-food movement of the ‘80s and ‘90s and the local-food movement of the 2000s were all mocked as elitist, utopian fads when they first emerged. If none of those movements has achieved anything close to the wholesale cultural transformation its exponents dared to imagine, all are continuing to shape the collective consciousness of consumers in new directions. As the emerging economic powers of China and India make the great leap forward to sushi bars and yoga studios, there’s no reason to believe they can’t absorb the lessons on collective responsibility that come with those things, perhaps more rapidly than the rest of us did.

“Sushi: The Global Catch” opens this week at the Quad Cinema in New York, and Aug. 31 at the Bloor Cinema in Toronto, with other cities, VOD and home video to follow.