Zoe Smith takes on everyone 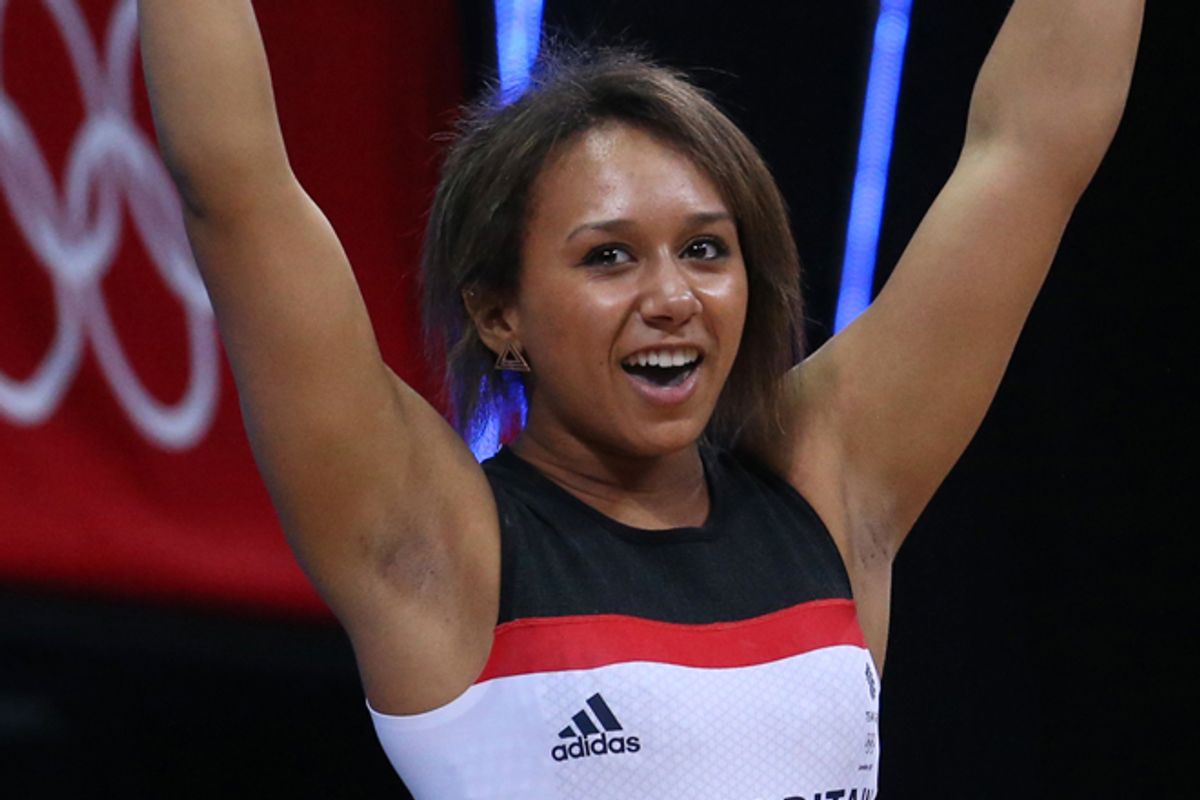 If the London Olympics can teach us anything, let it be that women weightlifters are the coolest, most well-adjusted young women in the world. Want to teach your little girls self-esteem? It's becoming pretty clear that sending them to the weight room may do the trick.

Earlier this week, we saw the righteous Holley Mangold brush off Conan O'Brien's fat joke at her expense with humor and poise. Now, 18-year-old Olympian and British record-breaker Zoe Smith has taken time from her busy schedule of kicking ass and taking names to say a few words to the trolls. In a blog post she called "Thanks (but no thanks …)," Smith has taken on those persistent Internet characters -- "the few ignorant twerps making rude comments," the ones who, Smith suspects, "had never done a moment of exercise in their life, or had the intelligence of a potato."

With admirable wit and panache, Smith goes on to address the "chauvinistic, pigheaded blokes who feel emasculated by the fact that we, three small, fairly feminine girls, are stronger than them." Then she really gets rolling.

We don’t lift weights in order to look hot, especially for the likes of men like that. What makes them think that we even WANT them to find us attractive? If you do, thanks very much, we’re flattered. But if you don’t, why do you really need to voice this opinion in the first place, and what makes you think we actually give a toss that you, personally, do not find us attractive? What do you want us to do? Shall we stop weightlifting, amend our diet in order to completely get rid of our ‘manly’ muscles, and become housewives in the sheer hope that one day you will look more favourably upon us and we might actually have a shot with you?! Cause you are clearly the kindest, most attractive type of man to grace the earth with your presence. Oh but wait, you aren't. This may be shocking to you, but we actually would rather be attractive to people who aren’t closed-minded and ignorant. Crazy, eh?! We, as any women with an ounce of self-confidence would, prefer our men to be confident enough in themselves to not feel emasculated by the fact that we aren't weak and feeble. And here's some food for thought – maybe you should broaden your criteria for what you consider 'attractive' anyway, because these perfect, feminine women you speak of probably have no interest in you either.

For the grand finale, she addresses the females who put down her and her teammates as well: "You'd think that young women around the same age as us would commend us for doing something different and with our lives, and putting 100% effort into it in order to make something of ourselves. But apparently we're 'weird' for not constantly eating crap, binge drinking regularly and wearing the shortest, tightest dresses that the high street has to offer." Zoe Smith for president of everything. Seriously. Give her a daytime talk show or a massive book deal or just get her to go around the world saying this to everyone on the planet, because this lady is brilliant. If we could bottle what she's got and pass it around to every girl, the world would be a glorious place.

Smith's already great achievement is that she has managed to cultivate her tremendous poise and wisdom in a veritable minefield of negative body image messages. If they handed out gold medals for body snarking, the competition these Olympic games would be ferocious. Earlier this month, Australia's Herald Sun created an international furor when it declared that swimmer Leisel Jones' "appearance that had tongues wagging" because she "appears heavier." The paper also initially added – but hastily yanked – a poll for readers to weigh in on what they thought of Jones' fitness. The swimmer, demonstrating truly epic grace, responded to the crass story by saying, "It's the best thing that could ever happen to me. I couldn't ask for anything more. I'm one of those people who if you put me under pressure, I'll show you what I can do. I did one of my best sessions ever after I read the comments. I've had nothing but support. I think that has probably touched me the most. I have never had so much support in my life. So thanks to the journalist who decided to write not-so-nice comments about me because you have never made me feel so loved in my life."

And last week Enow Ngachu, the coach of the Cameroon women's soccer team, stated of the opposition that "Brazil are the favorites and they have nearly all the best players in the world. But … their players look a bit heavy to me – that might be a problem for them as well." In other words, they're the best ... but isn't it sad they probably can't rock their skinny jeans?

Yes, the Olympics are the motherlode of hot female bodies. It's a fact that certainly hasn't escaped the attention of many, many sources. But in case anybody forgot, they're a celebration of what humans can do, not how they look. And if you look at a woman who's one of the greatest athletes in her field in the entire world and not just have thought that she's fat or she's mannish or she's ugly but have publicly expressed it, stop talking right now, you ridiculous, ridiculous little worm. And while your yap is resting, consider that it's a whole lot cooler being an Olympic contender than a "close minded and ignorant" boob. Consider the wisdom of Zoe Smith. Because if there's one thing a world-class weightlifter knows about, it's jerks.