Chick-fil-A: Too "sinful" to fry chicken?

You think eating Chick-fil-A is bad? Meet the men and women who worked there, and filed suit against the company 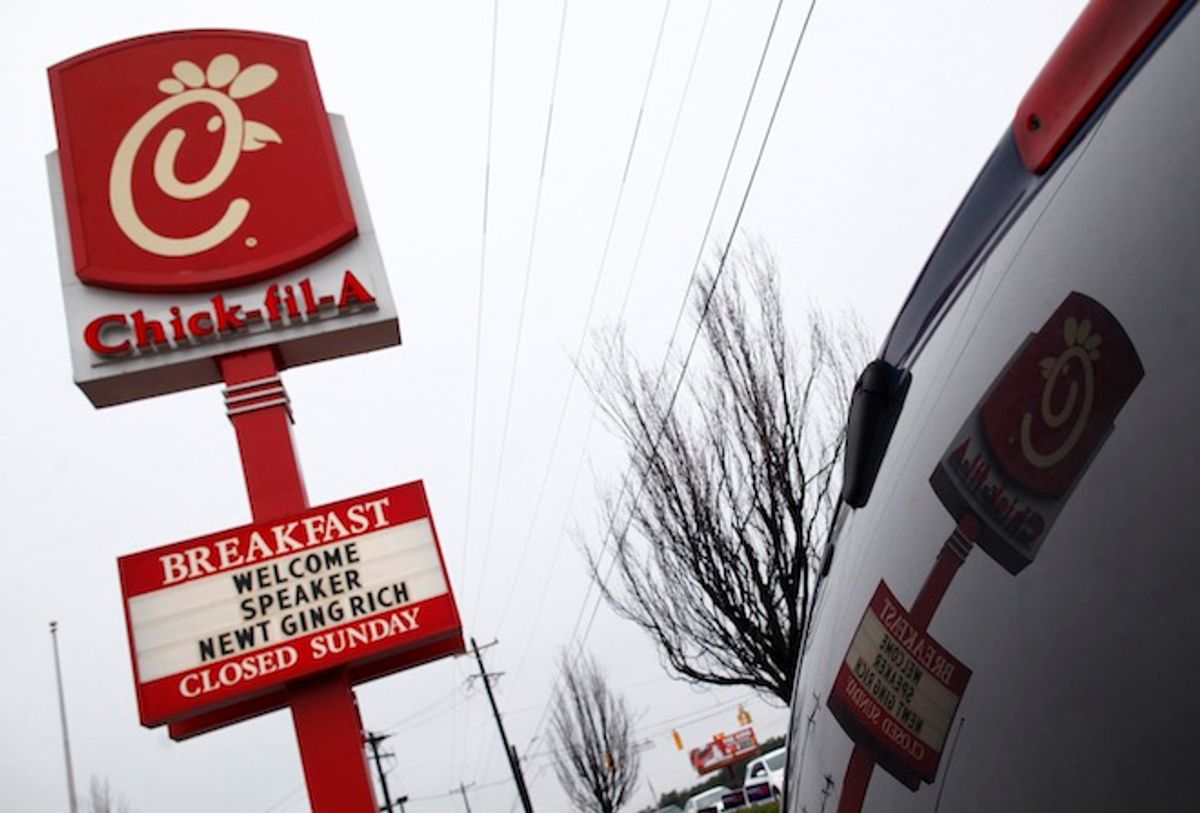 Wealth gives Chick-fil-A’s owners an outsize impact on our politics: As we’ve been reminded this week, the company channels millions of dollars into anti-gay organizations. But its impact on national policy is nothing compared to its influence over the lives of its employees. Comments from the company’s founder suggest that Chick-fil-A embraces its legal right to reward and punish employees’ private behavior. And a series of lawsuits allege that managers have wielded their authority over workers in ways that break the law: firing a Muslim for refusing to pray to Jesus; firing a manager so that she’d become a stay-at-home mom; and punishing workers for objecting to sexual harassment.

It’s now common knowledge that Chick-fil-A wears its brand of Christian conservatism on its sleeve. In a 2007 article, Forbes’ Emily Schmall described how that ethos infused the company’s employment policies. It meant extensive vetting of franchise operators, including interviewing their children and asking about their involvement in “community, civic, social, church and/or professional organizations.”  “If a man can’t manage his own life, he can’t manage a business,” Chick-fil-A founder and chairman S. Truett Cathy told Schmall.

But operators weren’t the only ones being judged on their private lives: Schmall wrote that Cathy “says he would probably fire an employee or terminate an operator who ‘has been sinful or done something harmful to their family members.’”

That’s not illegal. Non-union, private sector workers like Chick-fil-A’s can legally be punished for almost anything they do, except where specifically protected by law. Brooklyn College political scientist Corey Robin notes that companies can and do fire workers for outside-work activities, from adultery to supporting the wrong political candidate to wearing an earring. Robin, the author of “Fear: The History of a Political Idea,” told Salon that employers act as “this invisible, private government that basically people live with every day of their life.”

Of course, federal law does bar discrimination based on categories like gender or religion (not sexual orientation). But while seeking employees without sin, Chick-fil-A has come under fire from workers who allege it broke the law. Forbes reported that U.S. District Court records showed at least a dozen employment discrimination lawsuits against Chick-fil-A between 1988 and 2007.

In 2002, Houston restaurant manager Aziz Latif allegedly was fired the day after he declined to take part in a prayer to Jesus during a training program. He sued Chick-fil-A for discrimination and reached a settlement whose terms have not been made public. Last year, Aziz’s attorney, Ajay Choudhary, told the Collegian that his client had been fired “for not conforming.” “Prayer,” he added, “should be, if anything, a private purpose, not a corporate purpose.” (Choudhary did not respond to a request for comment.)

Praying to Jesus isn’t the only activity Chick-fil-A employees claim has been illegally imposed on them. Brenda Honeycutt, who was hired by a Georgia Chick-fil-A in 1991 and promoted to general manager in 1997, charges that last year her franchise owner/operator began excluding her from management meetings and then fired her so that she would be home with her kids. In May, Honeycutt filed a Civil Rights Act lawsuit against the owner/operator and Chick-fil-A, Inc. The suit alleges that the owner told Honeycutt and three other witnesses “that he terminated the Plaintiff so she could be a stay at home mother.” In the period prior to firing her, it states that he “routinely made comments” to her “suggesting that as a mother she should stay home with her children.” It says she was replaced by a man.

The lawsuit also cites the demotions of five female co-workers as evidence of a pattern of gender discrimination. (Honeycutt’s attorney did not respond to a request for comment.)

In California, workers charge they were retaliated against for exposing abuse. In a pair of lawsuits, six current and former workers allege a multi-year pattern of sexual harassment by their supervisor. Their attorney, Fernando Tafoya, told Salon that the supervisor has been “using his authority as a manager to abuse the women in the workplace,” including “forcibly kiss[ing] the women, the manager putting his hands down the bra of some women as they’re getting ice from the ice machine, grabbing their genitalia, slapping them on the ass, constantly rubbing up against them when he passes by them.”

“I want this to come to an end,” one of the women, Norma Duarte, told a San Diego CBS station, “and I don’t want him continuing to harass other women in the future like myself.”

Tafoya said that when workers brought complaints to the franchise owner, she “basically just ratified the conduct,” telling them the supervisor “was just playing around, or not taking it seriously.” Tafoya also said that appeals to Chick-fil-A’s corporate office “basically fell on deaf ears.” Now that the lawsuits have been filed, Tafoya said that the national company, through its attorneys, has claimed “that the women are lying, and they’re in a conspiracy to gain money from the employer.” The women range in age from 18 to 40; some speak English, some Spanish.

According to Tafoya, the supervisor called immigration authorities and tried to have two of the six workers deported in retaliation for speaking up: “These are women who have worked loyally for Chick-fil-A, for some [up] to six years, and it wasn’t until they complained about the sexual harassment that suddenly there was an immigration issue.”

Tafoya said he was “shocked” that, when employees raised the issue internally, “the initial response of the corporation wasn’t to order their local franchise to resolve this problem immediately.” In contrast, he said, “The Chick-fil-A national headquarters keep a very strong arm in terms of making sure that Chick-fil-A operates in a certain manner and is putting out a certain message.” The case is currently in discovery, which Tafoya said will determine whether the national corporation becomes a named defendant.

Chick-fil-A did not respond to Salon’s request for comment. The company’s website states that it “is not offering interviews at this time.” In Chick-fil-A’s most recent press release, executive vice president Steve Robinson said, “The Chick-fil-A culture and 66-year-old service tradition in our restaurants is to treat every person with honor, dignity and respect – regardless of their belief, race, creed, sexual orientation or gender.”

“You don’t have to be a Christian to work at Chick-fil-A,” Cathy told Forbes, “but we ask you to base your business on biblical principles because they work.”