Pick of the week: Beware the flying lobsters from Yuggoth!

Pick of the week: "The Whisperer in Darkness" renders a classic Lovecraft tale as 1930s-style gothic horror 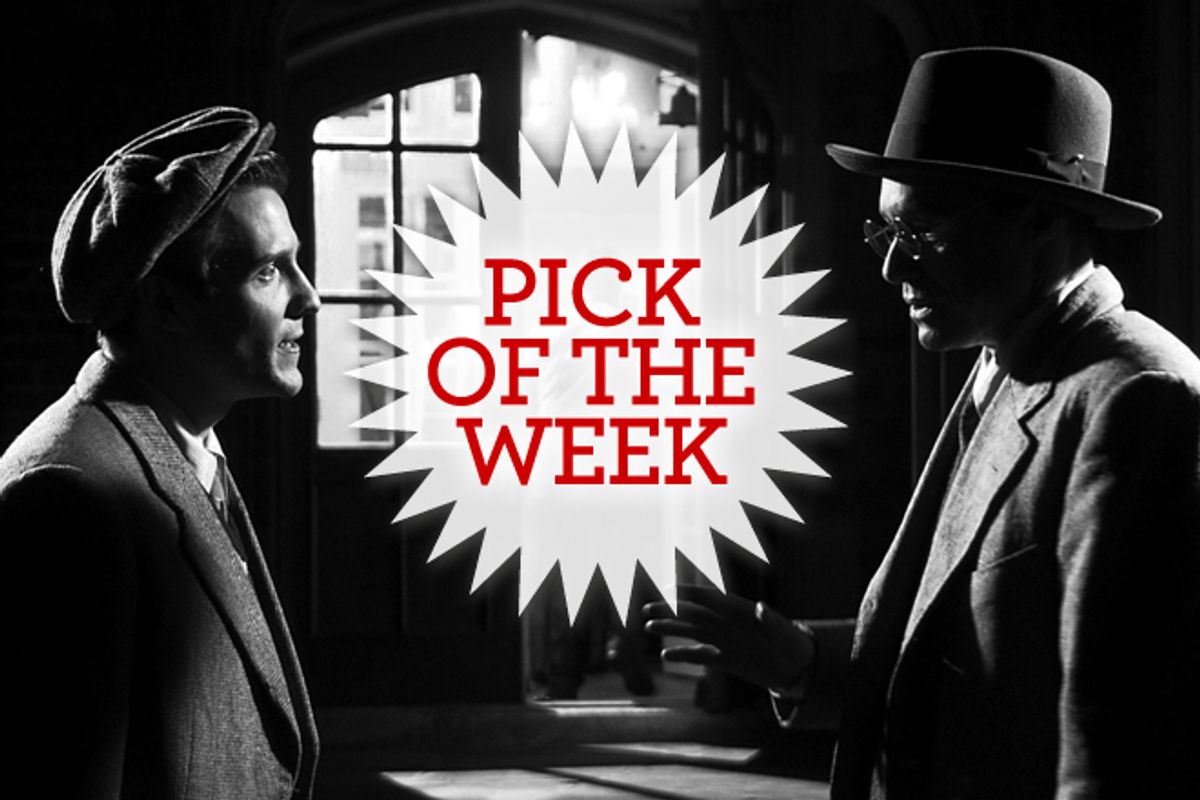 A still from "The Whisperer in the Darkness"
--

The hysterical and paranoid imagination of Howard Phillips Lovecraft, without doubt the most important American horror writer between Edgar Allan Poe and Stephen King, has long bedeviled and defeated filmmakers. Lovecraft’s stories are first of all about tone and perspective, often narrated by a deranged protagonist who has made horrifying discoveries and gazed beyond the horizon of ordinary reality to see gibbering, flapping creatures dancing to a tuneless flute played by a shambling thing in a monk’s robe with tentacles where its face should be, somewhere across aeons of incalculable time in the bottomless blackness beyond space and time. The perfervid language and fanciful settings and non-Euclidean geometry and rugose cones and eldritch undead squid-beings – pretty much everything essential about Lovecraft -- resisted both the technique and manner of cinema.

While Lovecraft’s cultural influence has grown immensely since his death in 1937 (in fact, he was a poor and obscure writer during his lifetime), the fanbase has never seemed sufficient to justify big-budget Hollywood versions of his tales. Furthermore, I would speculate that numerous writers have tried to adapt Lovecraft and abandoned it. His writing is deadly earnest, altogether humorless and full of antique phraseology and $5 vocabulary words, in true autodidact style. (A solitary child who was frequently ill and plagued by nightmares, Lovecraft read widely across many disciplines, but never graduated from high school.) The possibility that any movie adaptation would end up as expensive, unintentional high camp must have seemed daunting.

Across the years, a few filmmakers have chipped away at Lovecraft’s work, here and there, while hardly ever touching the Cthulhu Mythos, the semi-coherent fictional realm in which a race of unbelievably ancient and powerful gods (the Great Old Ones) lie in wait behind our paltry and partial understanding of the universe. B-movie director Roger Corman made a few 1960s films loosely inspired by Lovecraft, including the memorable “Die, Monster, Die!” (somewhat based on the story “The Colour Out of Space”). Stuart Gordon’s “Re-Animator” and “From Beyond” are both Lovecraft adaptations – and I’ve never even seen his 2001 “Dagon” (although it’s evidently not based on the Lovecraft story of that name). John Carpenter’s terrific 1995 horror film “In the Mouth of Madness” might be the most successful mainstream Lovecraft adaptation of all – except that it isn’t a Lovecraft adaptation, but something more like a postmodern mashup of Lovecraftian themes.

And then came the H.P. Lovecraft Historical Society, a maniacal group of Lovecraft fans based in Los Angeles who have long since left amateur status behind, producing numerous radio dramas, role-playing games, assorted paraphernalia and souvenirs and two (count ‘em!) full-blown feature film adaptations of Lovecraft’s work. In the name of He Who Must Not Be Named, I declare the HPLHS to be one of the great triumphs of fan culture in the Internet age. Honestly, it probably took devoted fans to seize the key to putting Lovecraft on the big screen. First, of course, it required undying fealty to Yog-Sothoth (I think that goes without saying). Almost as important, Sean Branney, Andrew Leman, David Robertson and their collaborators grasped that making movies as they would have been made in Lovecraft’s time was the solution.

In 2005, director Leman and writer Branney made a silent, black-and-white version of “The Call of Cthulhu,” Lovecraft’s signature tale, more or less as such a film would have been made 80 years earlier. The suspension of disbelief required to enjoy this movie, when it comes to the low-tech special effects or the California locations or the acting, tracks pretty closely with the suspension of critical judgment required to enjoy Lovecraft in the first place. It’s a genuinely spooky and memorably atmospheric film, whose feeling of apparent antiquity only accentuates its power. It’s a marvelous example of the inside-outside possibilities of fan culture; at one and the same moment you may be recognizing that what you’re watching is a bunch of miniatures, likely filmed in a bathtub or aquarium, and allowing yourself to be swept up in the story of a seaman discovering a horrible sunken city.

Now the HPLHS is back with “The Whisperer in Darkness,” a handsomely mounted black-and-white production that employs a controversial cinematic innovation of the late 1920s, the “talkie.” Made in the style of a prewar Universal horror movie (à la “Frankenstein” and “Dracula”), “The Whisperer in Darkness” might, hypothetically, displease a handful of hardcore Lovecraftians. This time around, Branney and Leman (who co-wrote the film, with Branney directing) use the original tale about skeptical Miskatonic University researcher Albert Wilmarth (Matt Foyer) and a remote Vermont farmer haunted by strange beings as the jumping-off point for a mixture of mad-scientist adventure, occultism and alien invasion.

If I don’t love “The Whisperer in Darkness” quite as much as “The Call of Cthulhu,” that’s mostly because the original story is pretty silly even by Lovecraft standards, featuring monsters who appear to have escaped from a supermarket lobster tank and a plot twist you can see coming a Vermont country mile away. But the filmmakers have crafted a seductive and admirably sinister rural gothic, in which the naive academic folklorist – after humiliating himself in a radio debate with real-life paranormal researcher Charles Fort (played by writer-producer Leman) -- is lured into the remote hills of Vermont, where tales handed down by Indians and settlers have long maintained that strange beings from the stars yet lurk. (There’s no winking at the viewer in this movie, but anybody who’s spent any time in Vermont will find this hilarious. These days, the beings lurking in those hills are cheese-making, pot-growing neo-hippies, but most of them are human in origin.)

Aging farmer Henry Akeley (Barry Lynch) has been writing increasingly anxious letters to Wilmarth, and sends his young son to Miskatonic to plead his case: The rock-lobster hill creatures have surrounded his farm, apparently because he took an ominous black stone they use in horrible religious practices. (I know: Dude, give it back already!) Ha ha ha, says Wilmarth, the persistence of folk belief, dontcha know. But when he arrives at the Brattleboro train station, Akeley is nowhere in sight, and Wilmarth gets a lift from a mustachioed, Rolls Royce-driving fellow whose abrasive Boston accent sounds an awful lot like the one he’s heard chanting in praise of the dire deity Shub-Niggurath (“Black goat of the woods with a thousand young!”) on Akeley’s wax-cylinder recordings.

Nicely paced and decently acted – there’s no question that the more naturalistic demands of the talkie pose some challenges – “Whisperer in Darkness” has a chiller-diller conclusion and some moments of real terror. (Along with its not especially terrifying, but potentially delicious, mind-reading seafood villains from space.) OK, so this is only the second-best straight-up Lovecraft adaptation in cinema history. Still, I call out gratefully to the HPLHS – Iä! -- marking my doorway with the Elder Sign, muttering invocations from the Pnakotic Manuscripts and awaiting the next visit of the Old Ones with both fear and longing.