It's Same-Sex Kiss Day as the fast-food cultural chicken war heats up. This time, it's the LGBT community's turn 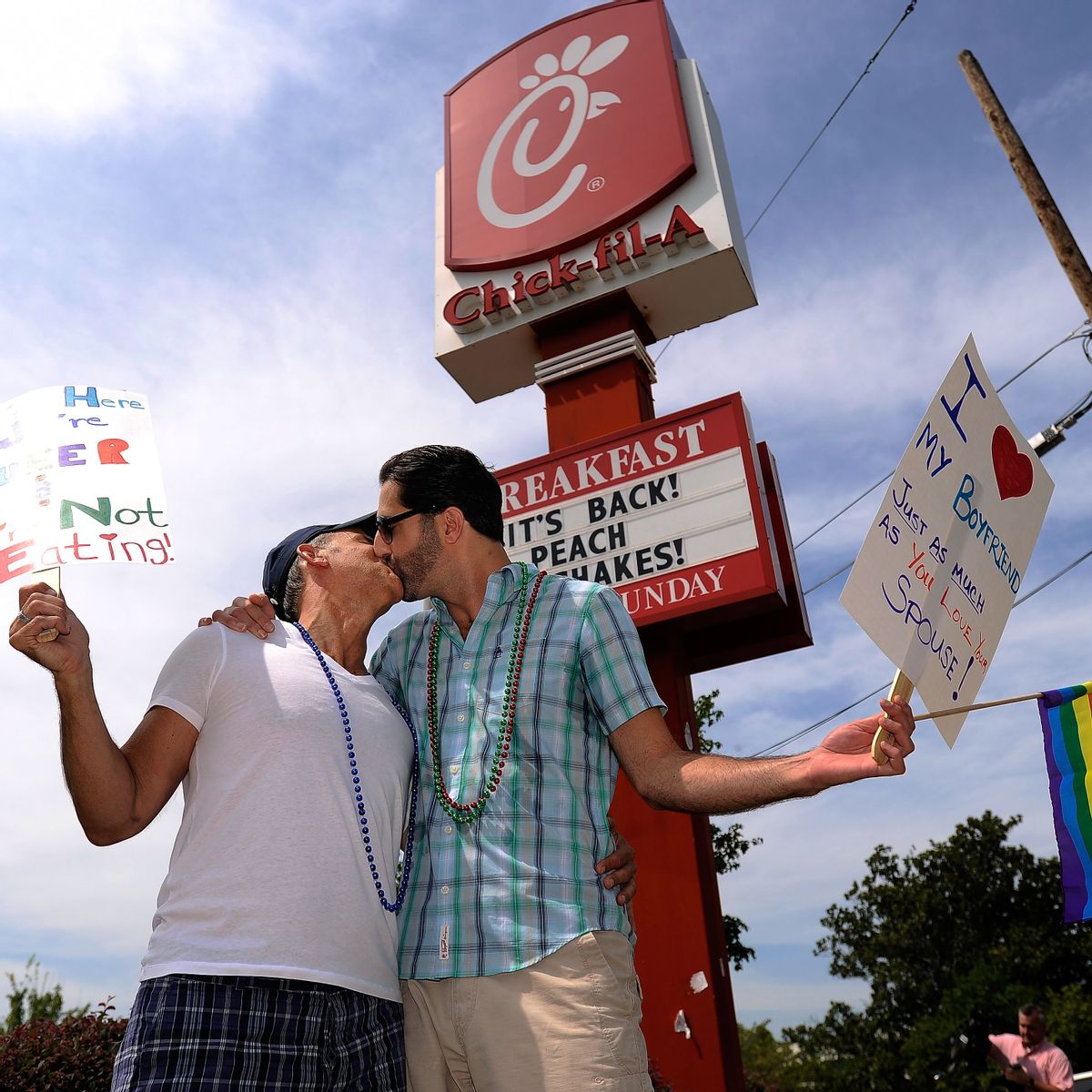 Jim Fortier, left, and Mark Toomajian, kiss as they join about two dozen members of gay rights groups and others protesting outside a Chick-fil-A restaurant Friday. (AP/David Tulis)
--

Isn't it inconvenient when the holidays fall so closely together? Like Christmas and New Year's. Or Labor Day and Rosh Hashana. Or Chick-fil-A Appreciation Day and Chick-fil-A Same-Sex Kiss Day. And yet, just two days after our great nation declared its allegiance to traditional biblical values and biscuits, a new throng is descending upon the poultry franchise. But … but … America still hasn't even fully digested its brownie sundaes from Wednesday!

Suffice to say, it's been a strange week. How did we all get in this side dish of pickles anyway? It started last month, after Chick-fil-A president Dan Cathy came out of the closet as officially "guilty as charged" on the matter of his beliefs about "biblical marriage" (unsurprising from a guy whose WinShape organization has thrown millions at anti-gay groups). After that got out, the company quickly found itself the unlikely center of a storm over either basic human rights or decent American values, depending on how people spin it. Next, cleverly capitalizing on the brouhaha, former presidential contender, Fox News host and carrot-raisin salad aficionado Mike Huckabee decreed via Facebook that August 1 should be a national day of honoring our values and the people who best represent them. A Martin Luther King Jr. Day with nuggets, if you will. And so, Chick-fil-A Appreciation Day was born. On Wednesday, crowds hungry for coleslaw and good old-fashioned heterosexuality lined up in droves to show their support for the chain. Morals were affirmed; tiny packets of fat-free honey mustard dressing were opened. Indoctrination was avoided.

But that was Hump Day, conservatives. This is Friday, the gayest day of the week. And no sooner had Chick-fil-A Day been announced than the counter movement's national Same-Sex Kiss Day at Chick-fil-A got rolling. The idea is simple -- all the organizers are doing is asking same-sex duos to show up at their local Chick-fil-A at 8 p.m. and smooch. It's like Chick-fil-A Appreciation Day, but with a better chance of getting mono.

As political gestures go, this one seems unlikely to do more than bring a lot of straight dudes hoping for some girl-on-girl action to their local Chick-fil-A. But the "We're not going to stand around quietly while you act like you're on a higher moral plane, brightly lit fast food establishment" message is an important one to make. It's necessary for consumers to make it clear that if an organization is going to spend its money on causes that "dehumanize" LGBT persons and even try to "cure" them, then those of us with different values are going to take our dollars elsewhere. But, maybe not before a little demonstration of love.

The kiss plan is a nice idea. But frankly, if you really want to hit the enemy in the giblets, some well-placed, incredibly deflating humor can speak volumes. So hats off to the enterprising Yelp reviewers who've managed, amid complaints about the size of the ketchup packets, to come up with their own unique take on what Chick-fil-A is dishing. Credit to the poster named "review," who said, "Wow you know, I was like, 'Eh, Chick-fil-A chicken is okaaayyy and all but it's not all that,' you know? Then I started reading about them recently in the news and I was all like, 'wow, I wonder if I'm gay and want to be lesbian-married, it sounds kind of cool?'" Similar props to the guy who declared it a "Great restaurant for men who love men who love chicken." There are plenty more, but most of them are pretty sexually explicit. Is the whole thing incredibly immature? Yes. Does it have the potential to be the greatest thing to happen to reviewing since Three Wolf Moon? Also yes.

The culture war over chicken isn't going to go away any time soon. A line has been drawn in the coop, and there is no turning back. Your character can likely be summed up now in your choice of drive-through. But even if you take away all the stuff about love and tolerance and equality, wouldn't you rather be on the side that's funnier on Yelp?