The Romney campaign picks up where Gingrich left off, launching a broadside against Obama on welfare reform 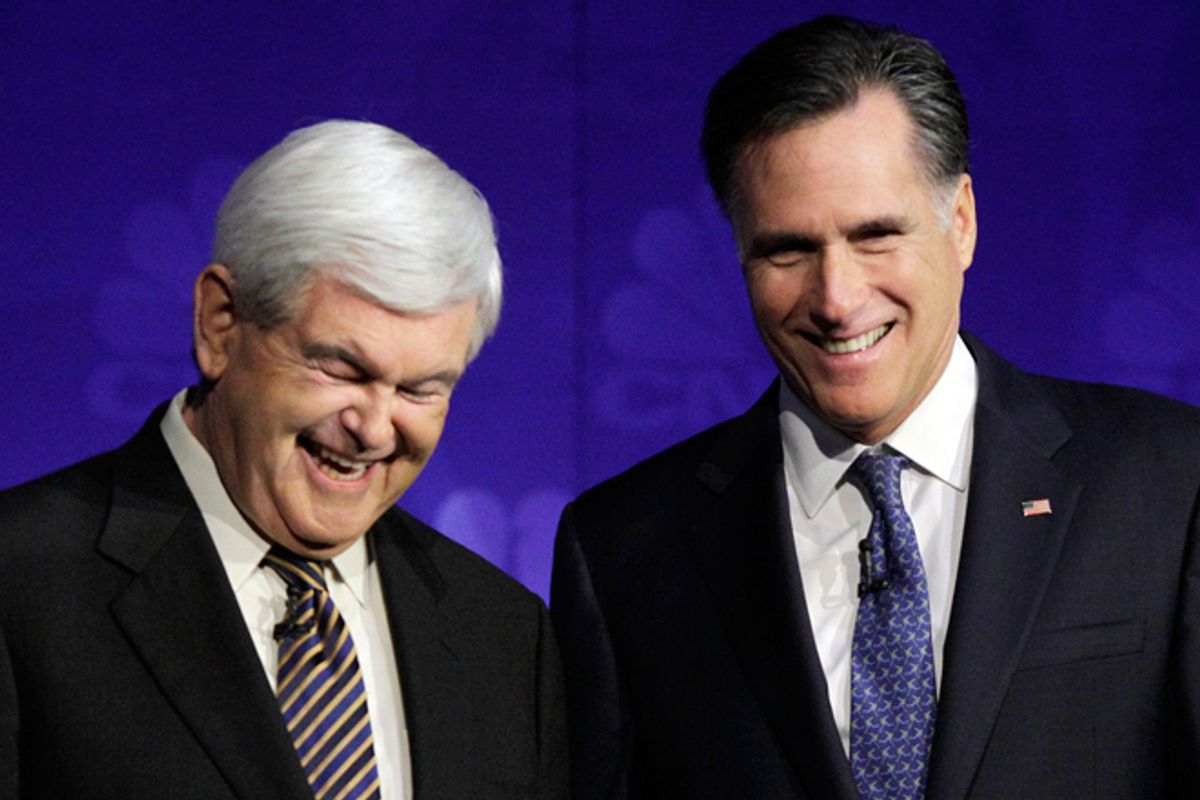 Mitt Romney’s campaign is seizing on a story that’s been percolating on conservative blogs for weeks, rolling out a new attack today against President Obama for “unilaterally dismantling” the bipartisan welfare reform regime signed into law by President Clinton. A new ad from the campaign states: "President Obama quietly announced a plan to gut welfare reform by dropping work requirements. Under Obama’s plan, you wouldn’t have to work and wouldn’t have to train for a job -- they just send you your welfare check.”

As has already been widely noted, the line of attack is complicated by a few problems. First of all, it’s not true, or at least wildly misleading. Obama’s plan doesn't end work requirements, but rather grants waivers to states that propose alternative requirements that suit them better than a one-size-fits-all federal plan, something conservatives usually  support. As the Washington Post’s Ezra Klein wrote last month, when the story first started gaining traction on the right, “The Obama administration is not removing the bill’s work requirements at all. He’s changing them to allow states more flexibility. But the principle that welfare programs must require recipients to move toward employment isn’t going anywhere.”

Secondly, it’s a little tricky to slam Obama for handing out waivers when Romney himself supported the exact same proposal as governor of Massachusetts in 2005. That year, 29 governors, including Romney, signed a letter from the Republican Governors Association asking Congress for broader welfare waivers. Romney’s signature is the second one listed, right under a passage calling for “increased waiver authority” in the welfare program to provide more flexibility in “allowable work activities.” The Romney campaign doesn’t mention this in the ad, nor in a fact sheet distributed today intended to push back on charges that Romney has changed his position.

It would be fair for the Romney campaign to note that the 2005 letter was addressed to Congress and asked for legislative changes, as opposed to executive action, but Romney isn’t taking issue with the process, but rather the substance of the policy. Arguing that Obama’s changes should go through Congress would be fair, but arguing that Obama is a “big-government liberal” because he wants to give governors, like Romney, more flexibility is not.

So why choose to fight on an issue where the campaign has such weak footing? The debate over welfare and welfare reform has always been tied up in race, and a cynical observer might argue that Romney is picking up where former House Speaker Newt Gingrich left off in the '90s and earlier this year when he repeatedly called Obama a “food stamp president." As University of California Santa Cruz professor Michael K. Brown wrote in the 2003 collection "Race and the Politics of Welfare Reform," “The 1996 welfare [reform] law is the culmination of conservatives’ success in manipulating the backlash to the Great Society’s centralization and expansion of social welfare during the 1960s, a campaign based on the political exploitation of vulnerability of poor African Americans, who became scapegoats for the ‘failures’ of the Great Society.” These are the infamous “welfare queens” of the Gingrich and Reagan-era.

When Gingrich, in his second life as a presidential candidate, made welfare a consistent line of attack against Obama, he often winked at race, and sometimes mentioned it overtly. “If the NAACP invites me, I’ll go to their convention and talk about why the African-American community should demand paychecks and not be satisfied with food stamps,” he told a crowd in New Hampshire. Then-candidate Rick Santorum used a similar argument a few days earlier. Noting that an official in Iowa told him the state's welfare rolls were up, Santorum said, "I don't want to make black people's lives better by giving them somebody else's money; I want to give them the opportunity to go out and earn the money." Of course, there are far more whites than blacks on welfare, but the attacks resonated and sparked a backlash because the stereotype of an inner-city minority mooching off the government’s dole has been salient for decades.

All campaigns lie and all politicians change positions, but Romney’s attack on welfare stands out for its brazenness in hitting the trifecta: It’s false, contradictory and fraught with racial undertones.