What does Raisman, her gold, and "Hava Nagila" say about ethnicity and the Olympics? 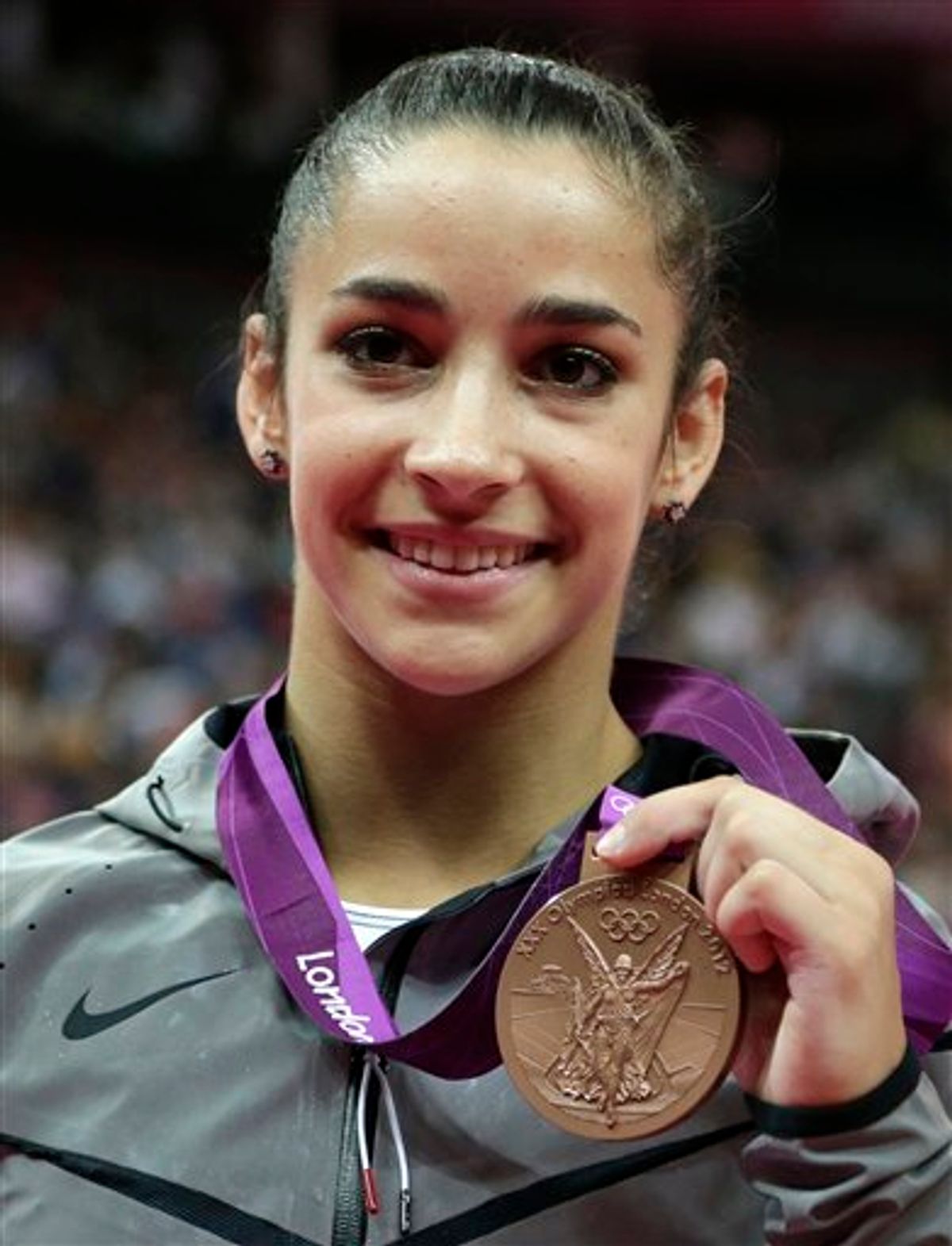 By the time American gymnast Aly Raisman started tumbling for a medal in the individual floor exercise event yesterday, she was being propelled along by quite an Olympic narrative. Raisman’s story isn’t Oscar Pistorius or Michael Phelps-level operatic, but over the previous nine days she’d put together a pretty compelling arc. The 18-year-old captain of the American team first upset Jordyn Wieber last Sunday night, unexpectedly securing a spot in the individual all-around and introducing audiences to her panicked, anxious mom and dad, still positioned to take the gold in the games’ very competitive “Most Intense Parenting” event. Raisman then anchored the American team as they won the group all-around, finishing her routine with tears in her eyes, only to lose out on a bronze in the individual all-around on a tie-breaking technicality.

Last night, in the individual beam event, thanks to the hectoring of Bela Karolyi and his cream-colored blazer and her personal coach’s frantic but successful search for a pen, Raisman was on the better side of that same tie breaker, winning a bronze after the U.S. challenged her score. The scene at the beam was one of the crazier five minutes of these Olympics games (scored, as was Gabby Douglas’ victory bow, to a Katy Perry song.) It may have given Raisman a bronze and some confidence, but it seemed a little crass — you can just complain?

Going into the floor exercise then, the last piece of women’s gymnastics at the Olympics, Raisman had gotten a gold, been robbed of a bronze, and robbed a bronze, accomplishing far more than most expected of her, but probably not as much as she expected from herself. All this backstory and the mere fact or her American-ness (impossible to miss in her stars and stripes leotard), would have been reason enough to root for a Raisman victory in the floor — or at least I think it would have been, but I’ve lost perspective since I've been in the can for Raisman since I first heard her tumbling to “Hava Nagila.” (Though, her reading while McKayla Maroney vaulted for her medal was a nice, nerdy touch.)

“Hava Nagila,” the Hebrew folk song and occasion to dance the Hora, is the number Raisman performs her floor routine to. She has performed that routine four times this past week, identifying herself as Jewish and strongly encouraging just about everyone who hears it to Google “Aly Raisman Jewish,” currently the most popular search term for Aly Raisman (followed, of course, by “Aly Raisman parents.”) If the Olympics are a time for even the most unpatriotic of us to confront the America-lover within — to turn on the Olympics and find oneself instinctually rooting for the American — they’re also a time to confront something a little more tribal, or, in my case, the fact that I am always going to root for the Jewish gymnast who dances to “Hava Nagila,” and, as she did last night, inspires an entire stadium full of people to clap along, like the Olympics were actually one giant Bat Mitzvah (which would help explain the Katy Perry).

The Olympics are supposed to be a safe space for nationalist impulses, where, say, America can symbolically jockey with China in the medal count without anyone getting hurt. But in America, that big old melting pot — however banged up, damaged, and full of hard-to-chew border walls — the Olympics are also a safe space for a low-grade ethnic pride, the kind that comes second (or, depending on how you feel about big smiles, vaulting skills, underdogs or hair glitter, maybe even third or fourth or fifth or sixth).

After Gabby Douglas won the all around, Bob Costas ended the night by remarking how wonderful it was to have an African-American woman win, particularly for the way that it might inspire other African-American girls. Someone in my Twitter feed snarked, “Bob Costas just ended racism in America. Well done!” which was a deft, if heartless jab. Obviously, Gabby Douglas’ victory does not mean racism is over, just as Raisman's doesn't mean anti-Semitism is. The Olympics are a big sports event, and there’s only so much patting ourselves on the back we should do about symbolic events when there are so many non-symbolic atrocities happening every day.

And yet there is maybe a quick, surreptitious grip on the shoulder we might allow ourselves. The American women’s gymnastics team consists of an African-American girl, an Asian-American girl, a Jewish girl, a white girl, and, silver medal be damned, a walking, talking vaulting machine. Last night, one of them won a gold medal dancing to a Jewish folk song on the 40th anniversary of the Munich Olympics, a song that most Americans know, if they know it at all, from Jewish weddings. When Raisman finished her routine and mouthed "wow" to her self I kvelled, and then I kvelled even more when NBC panned up to the stands and showed Raisman's teammates cheering her on, wearing the same outfits and the same smiles, but not one of them looking the same.