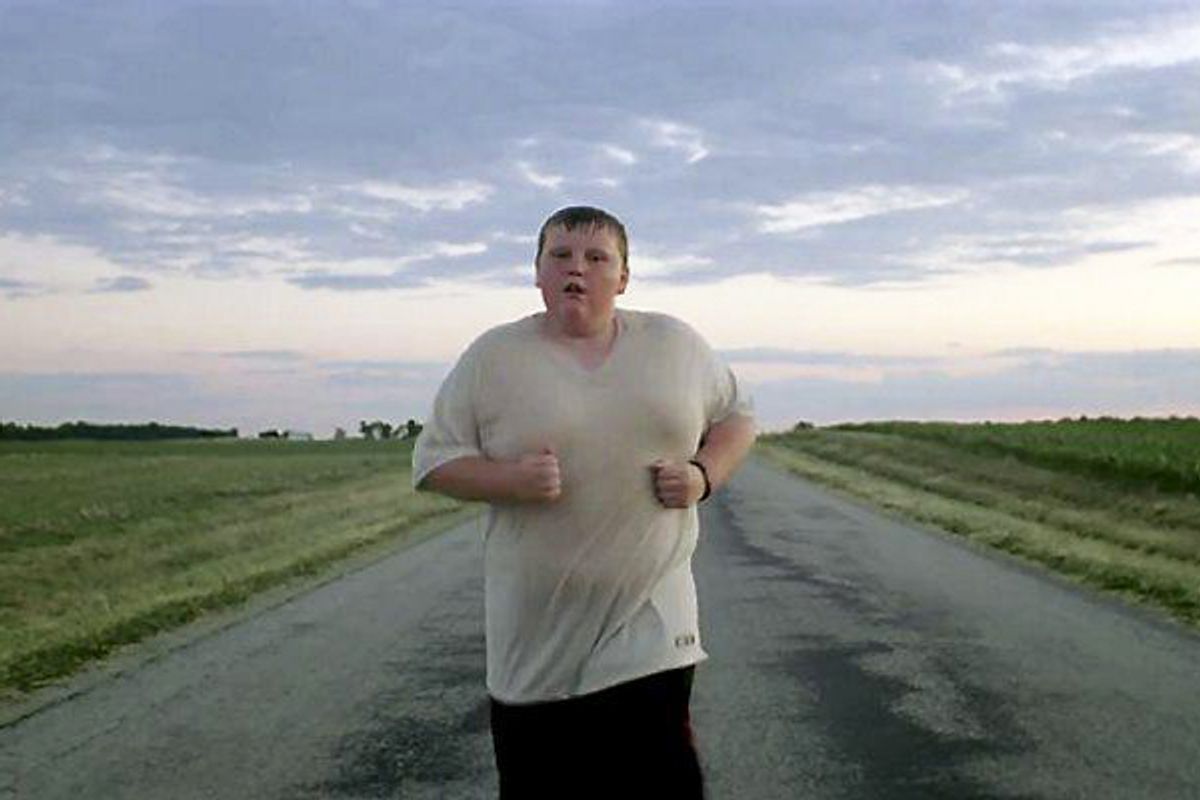 It's become one of the most distinctive ads of the London Olympics. A lone figure in the distance, running down an empty road toward the camera. As he advances, the voice of Tom Hardy tells us that "Greatness – it's just something we made up. Somehow we've come to believe that greatness is a gift reserved for a chosen few. For prodigies. For superstars. And the rest of us can only stand by watching. You can forget that. Greatness is not some rare DNA strand. It's not some precious thing. Greatness is no more unique to us than breathing. We're all capable of it. All of us." By the time Hardy has reeled off his spiel, the figure of greatness is right in front of us. It's a 5-foot-3, 200-pound, 12-year-old kid.

Nike found Nathan Sorrell when they came to his small Ohio town and put out a call for "a boy with a specific profile." (I'm guessing: husky.) Sorrell is not really a runner. In fact, on the ad's second take, the kid -- who'd eaten his lunch a short time before -- threw up in a ditch. In an interview with his local paper, he said that he and his mother are now trying to lose weight together, and that if they succeed, Nike will return to do another spot.

Reaction to the ad campaign -- which also features acclaimed athletes ruminating on their critics and  limitations as well as ordinary-looking, low-tech folks engaged in a variety of sports -- has been decidedly mixed. Sorrell's hometown paper, the Record Herald, called his ad a "story of the greatness in us all." Expectedly, on YouTube, it's been a festival of both "Wow, that's inspiring" and "LOL FAT PEOPLE." Buzzfeed's Copyranter, meanwhile, has called it "hooey," saying, "Greatness is a gift. Not just in athletics, but in academics, cheating, lying, video gaming, farting, whatever," adding that if you follow the ad's sentiment, "Let's give everybody who tries super hard in school A+'s." And in Jezebel, the ever-insightful Lindy West noted that "if this middle-schooler is feeling pressure and shame on a national scale and wanting to lose weight because the Nike Corporation put his fat body on display to sell shoes, then that's creepy and depressing." She went on to say that "the implication is that 'greatness' for this kid would be to become a thinner kid."

If Sorrell and his mother are on some weight-loss quest in the name of Nike, that's pretty sad. But I disagree that the campaign equates greatness with thinness. If you haven't read the news that the kid in the ad is trying to lose weight, on its own it seems like a message of acceptance. And while I don't want Nathan Sorrell to go on some dumb diet so he can get in another commercial, I do hope that the experience of being the face of "greatness" inspires him to go out for some activity that speaks to him. I see the Nike campaign as a rallying cry that's dear to my heart – a message that we need to stop psyching ourselves out of the joy and the satisfaction of physical activity.

I rarely go in for cute ad campaigns, especially ones that don't involve Isaiah Mustafa and a towel. Nor am I am a fan of Nike. I generally run around in a cheap pair of Champions from Target. I know that the point of Nike's campaign is to sell shoes, plain and simple. But as both a runner and an unbelievably soft touch, I can admit that Paula Radcliffe's "Find Your Greatness" spot made me cry the first time I saw it. "I know that the odds are stacked against me," she says. "I've recorded my slowest times ever. I've had the injuries. I'm 38. I've got two amazing kids. I really should just sit down and put my feet up." Then there's a beat before she says, "Is that what you want?" In other words, suck it. Suck it, naysayers who try to put you down before you even get started. And suck it, most of all, to the voice in your head that says I can't or I shouldn't or it's too late. Now if you'll excuse me, there's something in my eye.

The challenges, pleasures and long-term benefits of physical activity shouldn't be reserved for the elite. We all need to stop being afraid that we'll look foolish or that we're too old or too fat or too clumsy. Yeah, it's a sneaker ad, but it contains a useful message. We need to, as Nike would say, just do it, now, right as we are -- whether we're as big as Holley Mangold or as old as Hiroshi Hoketsu. The key word in it all is finding your greatness. Yours. Not an A-plus for everyone, but a personal best. Not so you can be hot or skinny or a star. But so you can find whatever amazing thing lies just outside of your comfort zone. To be the fat kid on the road.