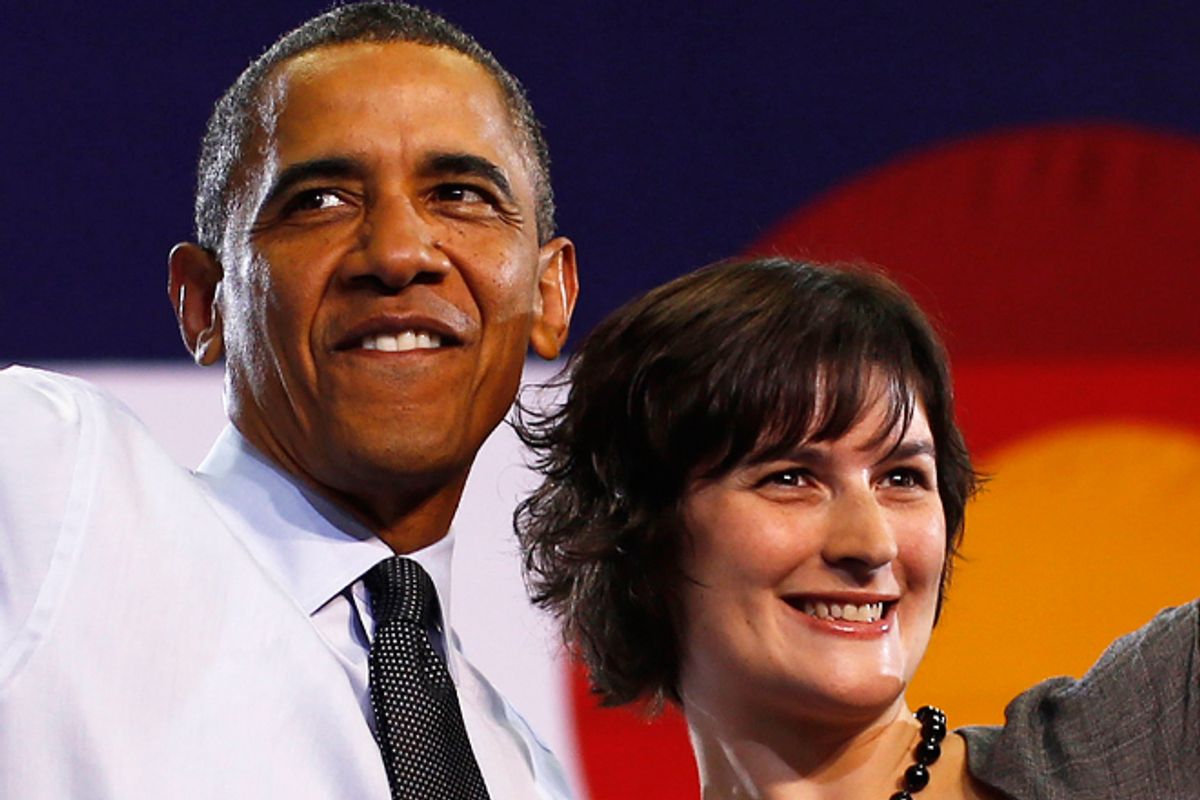 Barack Obama and Sandra Fluke during an election campaign rally in Denver on Wednesday. (Reuters/Jason Reed)
--

President Obama is in Colorado today, making his pitch to that swing state's voters in general and, in particular, to women concerned about the gleeful stripping of their rights. (Obama's introduction by Sandra Fluke, whom he called "one tough and poised young lady,” is a helpful reminder of the latter.) His timing couldn't be better: Two days ago, Personhood Colorado delivered its signatures to get on the November ballot for the third time, in a quixotic but potentially electorally significant bid to get a fertilized egg classified as a person in the state constitution.

Colorado, a state containing multitudes -- both Boulder and Focus on the Family -- is also the headquarters of the Personhood movement. Its doggedness is matched only by its uninterrupted failure. This year alone, the movement has tried and failed to get on the ballot in eight other states. Last year, Personhood got on Mississippi's ballot and was trounced. And there's strong indication that the movement is actually hurting its own cause, most recently when Colorado elected Democrat Michael Bennet in the 2010 Senate race after his opponent, Ken Buck, briefly endorsed Personhood.

“Ads attacking Buck on abortion and rape and all those issues were targeted to unaffiliated women and it worked," the Colorado Republican Party chairman, Dick Wadhams, said at the time. "Buck became unacceptable and they voted for Bennet." The Obama campaign has made it very plain it would like to replicate Bennet's success, and last year Wadhams told the Denver Post that he expected a similar appeal from the presidential election to women and Latino voters, which "will be the club [Democrats] use to do that again."

Personhood's obsession with the moment of fertilization -- conflating popular forms of contraception with abortion, despite actual medical evidence -- allowed Democrats to frame the attacks on women's health as attacks on birth control (though, as Limbaugh and associates show, even birth control's uncontroversial status isn't to be taken for granted). The events of this year have made the pitch to the political center even easier. When Bennet ran, there was no contraceptive coverage mandate, no massive outcry against Rush Limbaugh or the Susan G. Komen foundation, no bills in Congress trying to allow private employers to deny their employers birth control coverage.

The consensus is that Personhood lost blood-red Mississippi when opponents, perhaps realizing they couldn't change local views on abortion in one election cycle, pointed out the sweeping consequences of saying a fertilized egg is a person -- from in-vitro fertilization to common forms of birth control to miscarriages. Personhood claims it has fixed these inconvenient problems in its new ballot text, and depressingly, the Denver Post coverage this week takes that at face value:

Personhood USA founder Keith Mason said the ballot language this year is different. It would extend constitutional rights to all humans at any stage of development by stating that protections of life "apply equally to all innocent persons." It would "prohibit the intentional killing of any innocent person."

Mason said the amendment expressly would not prohibit all forms of contraception, in vitro fertilization or medical treatment for a pregnant woman with a life-threatening medical condition. It would not criminalize spontaneous miscarriages, he said, as opponents have claimed past measures would.

This is blatantly misleading. (And in case you're wondering, "the intentional killing of any innocent person" is already prohibited in Colorado and elsewhere.) Opponents have pointed out that a Personhood amendment would make effective in-vitro fertilization nearly impossible, because they think the embryos created are people and can't be frozen, potentially "murdering" them. They think the IUD and the birth control pill are "murder," not birth control, because they might (but almost certainly don't) prevent a fertilized egg from implanting. As for life-threatening pregnancies and miscarriages, all you have to do is look at countries throughout Latin America that have strict abortion bans, that investigate miscarriages if they seem suspiciously induced and that have denied women lifesaving medical care for fear of running afoul of the law.

Romney, by the way, has shown occasional support for a constitutional amendment saying life begins at conception, though you'll be shocked to learn his position is hard to nail down. In any case, the Obama campaign is making plenty of hay with Romney's opposition to federal funding for Planned Parenthood. Meanwhile, Rush Limbaugh was back on the topic of Fluke today, chortling, "I should be getting a finder's fee." Notably, this time, he stayed away from attacking her again personally. Occasionally, there are consequences for this sort of thing.