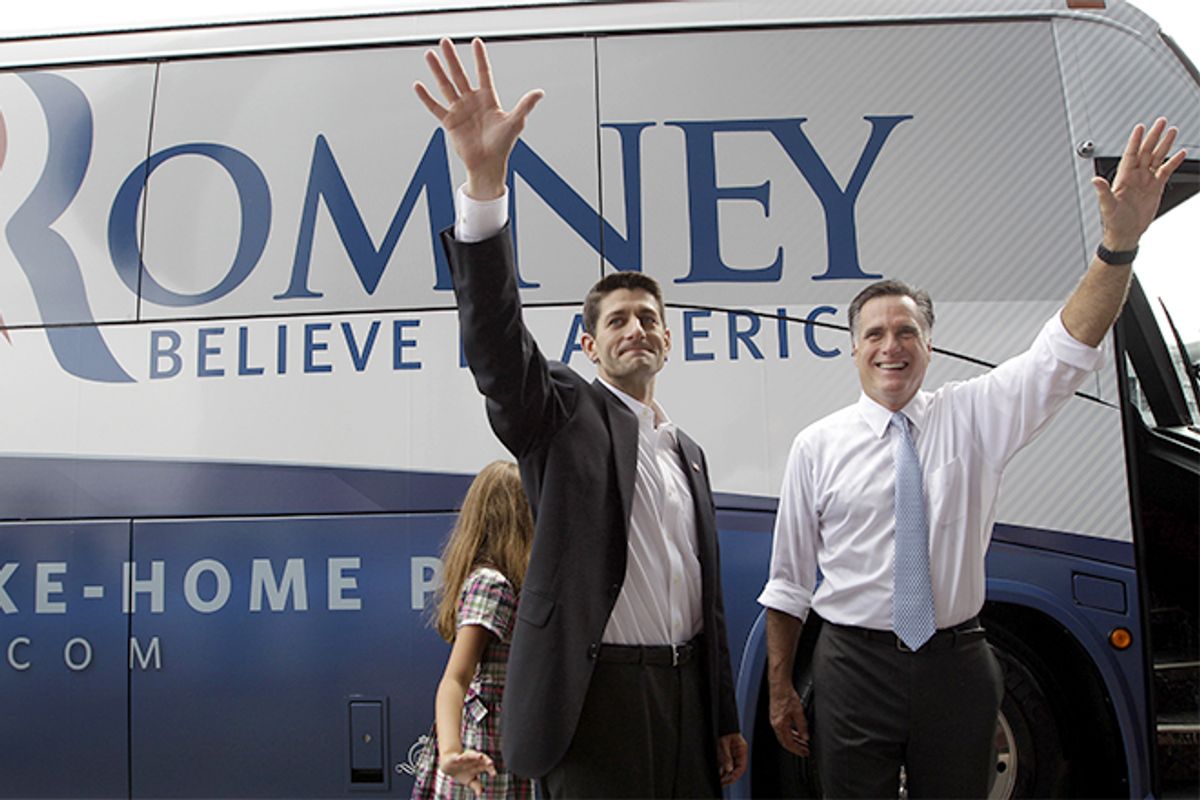 The contrast between (a) how Paul Ryan is depicted by worshipful Republicans and media figures alike -- as a principled fiscal conservative and advocate of Randian self-sufficiency  -- and the reality of what he's done in his life is as stark as it is typical. The American Right has an amazing ability to lionize leaders whose lives are the precise antithesis of the political values that define their image.

For the last decade, conservatives transformed George Bush and Dick Cheney into the embodiments of warrior courage, even though they both scampered away from combat, letting others fight and die for them in a war they both supported. The same is true of almost every leading right-wing super-patriot tough-guy: John Bolton, Bill Kristol, Newt Gingrich, Rush Limbaugh -- and Mitt Romney. Somehow, when the authoritarians on the Right search for icons of manly warrior power to venerate, they find only those who like to melodramatically play-act as such, but who ran away when it came time to actually perform. Indeed, such figures dress themselves up with extra-flamboyant trappings of faux Toughness for the same reason female impersonators have long favored over-the-top feminine costumes and gaudy make-up: the more one lacks an attribute which one wishes to project, the more extreme one must be in pretending.

Thus do we have Paul Ryan -- Randian Super-Hero of Individual Self-Reliance and Working Class Warrior against government debt, waste, and intrusiveness -- whose actual life is a testament to the precise opposite values. As Charles Pierce and Joan Walsh document, not only was Ryan raised in a rich family and not only has he spent his entire adult life on the public payroll, but he has relied, and continues to rely, on various forms of government help in climbing every rung on his educational and careerist ladder. His claim to fiscal conservatism is even more laughable, as he voted FOR virtually every program that has piled up debt over the past decade, including the Iraq War (not just its commencement but its limitless continuation), the Wall Street bailout, Medicare Part D, Endless War in Afghanistan, and -- in the midst of all of that -- Bush tax cuts.

Perhaps most ludicrous of all is the notion that he's some sort of advocate for restrained federal government power. As Antiwar.com's John Glaser documented today, Ryan has continuously voted in favor of measures to expand all sorts of intrusive federal power, including making the PATRIOT Act permanent, enacting the Military Commissions Act to provide indefinite detention with no habeas corpus rights, implementing the Protect America Act to massively expand the U.S. Government's power to eavesdrop on Americans without warrants, supporting a federal Constitutional amendment to deny same-sex couples the right to marry along with a law banning the ability of gay couples in D.C. to adopt children and the continuation of Don't Ask/Don't Tell, a Constitutional amendment to criminalize flag burning, and almost every proposed measure to restrict abortion rights.

The ACLU -- which has been continuously scathing in its criticisms of President Obama's civil liberties record -- issued a report on the potential Vice Presidential nominees (including Joe Biden) entitled "A Heartbeat Away from the Presidency, Light Years from Civil Liberties," and said yesterday that Ryan has "uniformly harmful views on five key civil liberties issues including a humane immigration policy, LGBT equality, reproductive rights, torture and indefinite detention and fair voting access" (he did, however, vote against the NDAA's indefinite detention provisions, signed into law by President Obama at the end of 2011, as well as for a bill to include "sexual orientation" in the list of factors that cannot be legally used in job hiring). Whatever one wants to say about Ryan's record, it is the very opposite of constraining the power of the federal government to intrude into the lives of individuals; indeed, it's a testament to massive expansion of intrusive federal government power in almost every realm.

This dynamic -- in which the defining image of partisan icons is the antithesis of their personal reality -- is, of course, also prevalent among Democrats: a point I note not to fulfill a both-sides-are-guilty obligation, but because it's indisputably true. Obama supporters pretended that his 2008 campaign was some sort of populist uprising even as Wall Street overwhelmingly supported his candidacy. Now, especially with the selection of Ryan, they're going to act as though his re-election is all about shielding Medicare from cuts even though, as Matt Stoller documents today (citing this), Obama already tried to cut not only Medicare but also Medicaid and Social Security, and clearly intends more of the same with a second term (along with his ongoing empowerment of America's most extreme corporatists). And, of course, the "chickenhawk" insult that was so popular among Democrats during the Bush years has completely disappeared, as they now celebrate the so-called Toughness of two political leaders -- Obama and Biden -- in their continuous willingness to use military force in other countries even though neither ever served in the military.

But the American Right seems to have a particular need to inflate their leaders into beacons of courage, self-sufficiency and virtue, even when their lives are completely devoid of those traits. Paul Ryan is a perfect symbol of America's political class. He is directly responsible for the large deficits and debt which America has compiled, and now seeks to exploit what he himself helped create in order to deny to others the very benefits that were responsible for almost every opportunity and success he has had in his life, with the burden falling most harshly on those who need those benefits the most to have any remnant of fair opportunity. That's the crux of the American elite: making massive mistakes and engaging in destructive behavior and then demanding that everyone -- except them -- bear the brunt of the consequences.

In 2009, Ryan spoke to National Review about his views on foreign policy and it was almost all rote right-wing pap: Obama doesn't believe enough in American exceptionalism but only in "moral relativism," he's too focused on diplomacy, etc. etc. As usual, things would be unimaginably improved if even a tiny fraction of the Right's critiques of Obama were actually real.

UPDATE: In 2010, Barney Frank had a two-minute exchange on ABC News with "small governent" advocate George Will regarding Frank's crusade to legalize marijuana, as Paul Ryan (who, of course, is a pure Drug Warrior and supporter of harsh criminal punishments in general) sat next to Will; Frank, who has also long been working to legalize Internet gambling, amusingly and insightfully explains to these putative believers of small government why their actual beliefs are the precise opposite of the political values they claim to embody: