Paul Ryan is the anti-Reagan

After years of anti-intellectualism, the GOP turns to a sincere idea man. The risk? People will hear their ideas 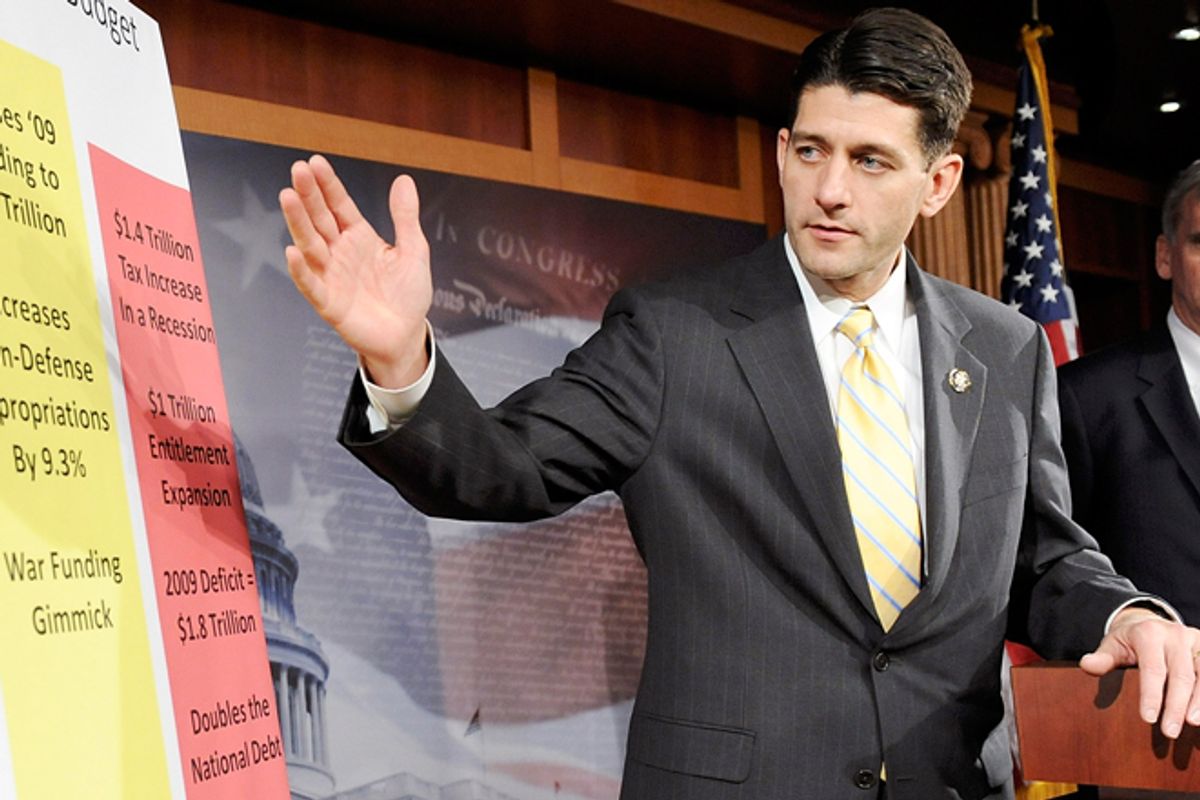 Mitt Romney’s choice of Rep. Paul Ryan as his running mate can be read in any number of ways. Ryan’s selection is a capitulation to the Tea Party and the Republican right, and a tactical decision to fight the fall campaign on the wonky grounds of fiscal policy. It clearly represents the GOP doubling down on whiteness, opposing a man who is not merely our first black president but a living embodiment of America’s cultural and racial fluidity with a silver-spoon Mormon zillionaire and a guy from a lily-white Midwestern small town. I’m not suggesting that either Romney or Ryan is a racist; it’s more that they seem like people supremely unaffected by the racial dynamics of contemporary American society, as if they had teleported in from 1953.

Ryan, in particular, seems old-fashioned in another way, one I believe is central to his appeal and central to the 2012 Republican strategy. Not many people, I imagine, look at Ryan on TV and think back to literary critic Lionel Trilling’s seminal 1972 book “Sincerity and Authenticity,” and its exploration of two competing moral ideals in Western culture. But I believe Trilling's categories shed an unusual and revealing light on Ryan's significance, and on recent American politics in general. In Trilling’s terms, Ryan represents an evident Republican shift back toward the values of “sincerity,” which could be described as being true to yourself and others by telling the truth (an idea Trilling thinks was handed down to us from the Renaissance). Correspondingly, it's a turn away from the related but dissimilar values of “authenticity,” which is about expressing your true inner self without regard to others or society, and which Trilling sees as a more recent and specifically post-Freudian invention. If you want to argue that Paul Ryan’s mode of sincerity and civility is just the pretty face pasted on top of a rapacious social-Darwinist agenda you may be correct, but that’s not the point. He certainly conveys the impression of meaning what he says and saying what he means, and in so doing he’s aiming directly at President Obama’s greatest political strength.

I first became aware of Ryan on election night in 2008, when Fox News handed him the assignment of drawing larger conclusions from that fall’s Democratic landslide. The Wisconsin congressman was both dignified and eloquent in discussing his party’s defeat, speaking calmly about the necessity of returning political debate to the realm of economic policy and philosophical ideas, where he believed Republicans would prevail. In part, that was a strategic rebuke directed at the McCain-Palin campaign, which had flailed around in the shallow waters of spooky symbolism in search of a message, hemmed in between the massively unpopular George W. Bush, the collapsing economy and the almost messianic rise of Barack Obama.

But more striking than what Ryan had to say, at least for me, was the way he said it. What I thought four years ago was brought home to me forcefully over the weekend, watching the prospective vice-presidential nominee speak before adoring crowds. With his intellectual background in right-wing economic theory and his eagerness to discuss grand budget-cutting schemes and even grander philosophical ideas, Ryan represents an abrupt shift in Republican messaging and style. In place of the long-dominant politics of macho authenticity – think George W. Bush in that flight suit, or Ronald Reagan belittling Jimmy Carter during a televised debate – we now have the wonky and evidently sincere erudition of Ryan, as understudy to the moneyed sleekness of his running mate. With his jug ears, funny hair and modest stature, Ryan reminds me more of a Republican operative who works in the shadows, like Reaganite budget czar David Stockman or anti-government wizard Grover Norquist, than a stereotypically rugged and manly national candidate.

If Trilling’s book, and the series of Harvard lectures from which it came, were mostly concerned with sincerity and authenticity as modes of literary and cultural expression, he was aware that they had much wider relevance amid the self-revising “moral life” of the Western world. Intriguingly and perhaps ironically, Trilling sees the quest for the authentic self embodied in modernist and postmodernist 20th-century literature – the kinds of books often read by college-educated left-wingers – whereas this idea found quite a different audience in the political realm. The distinction between sincerity and authenticity, and occasionally the confusing overlap between them, has played out over and over again in political history. To cite one obvious recent example, prep school and Ivy League graduate George W. Bush was twice framed as the manly, authentic American you wanted to have a beer with – “you” being some notional middle-class white person – instead of being bored to death by the undeniably sincere Al Gore or John Kerry. (Both of those guys, on the other hand, worked as hard as they could to seem “authentic” – remember Kerry’s mortifying military salute to the Democratic convention? – and failed abjectly.)

At the risk of oversimplifying immensely, Abraham Lincoln was “sincere” and Andrew Jackson was “authentic.” George Washington, so far as I can tell, was some of both, which may be why people from all quadrants of the political spectrum lay claim to bits of his legacy. Here’s the difference: A political leader who relies on sincerity tells you what he really thinks (or at least claims to do so) and engages in reciprocal civil dialogue (or, again, pretends to). He invites you to vote for him because you agree with his ideas, or enough of them, and because you believe he will remain sincere in his dealings with you. For better or worse, the sincere mode has long been associated with Democratic politicians: Franklin D. Roosevelt, John F. Kennedy, Jimmy Carter, Bill Clinton and, most assuredly, Barack Obama. (Let me again make clear that I’m using “sincerity” in Trilling’s sense, to refer to a manner of presentation or a mode of address. I am not arguing that their sincerity was always, er, authentic, or that they never told a lie.)

On the other hand, a politician whose appeal rests on authenticity wants your vote because of who he is, not because of specific policy ideas or philosophical beliefs. Often this is based on some broad and general sense of shared identity that leaves out some spoken or unspoken other. He may position himself as a heroic individual who stands for a larger group: He is a true American, a true Christian, a true man of the working class, a true Aryan, etc. He does not seek dialogue or debate, but rather basks in the evangelical agreement of his supporters and the vitriolic hatred of his foes. The authentic leader’s biography and character and essential selfhood are meant to speak for themselves and embody the greatness of America (or whatever other relevant abstraction). Once we accept that fact, we accept all the decisions that flow from it, no matter how many destructive overseas wars he may start or how badly his retrograde economic policies may affect us. We are not voting on the narrow ground of self-interest, in fact, as is frequently noted about working-class Americans who support Republicans. We are voting for something much bigger than that, an act of mystical communion with the authentic leader that validates our own authenticity.

If Reagan and George W. Bush are the presidents who were clearly elected on their aura of authenticity, the Republican right since at least the time of Joe McCarthy has featured this ingredient. Sarah Palin, the last Republican vice-presidential nominee, arguably represented the apotheosis of this tradition, and I suspect that the Romney-Ryan ticket exists partly as a reaction to the self-destructive grizzly-mama theatrics and exuberant know-nothingism of her 2008 campaign. While the GOP has occasionally nominated candidates who relied on the mode of sincerity to some degree (Bob Dole, George H.W. Bush and John McCain), they generally haven't fared well. Dwight Eisenhower was the last two-term Republican president from that side of the ledger, and today’s party would view Ike as only slightly less un-American than Leon Trotsky.

To be successful, the sincere politician must be able to talk to the “common man” without condescending. The authentic politician is the common man, almost in metaphysical or miraculous fashion and (as in Bush’s case) irrespective of his actual class background or upbringing. To be sure, there’s considerable blur at the borders of these categories. As Trilling puts it, these are moral distinctions, and as such imprecise and subject to change. All politicians these days have highly constructed images and massaged biographies, and Bill Clinton’s “man from Hope,” up-from-poverty saga was just as crucial to his political rise as his often insincere-sounding sincerity. With Palin in 2008 and Michele Bachmann in 2012, we saw a fascinating new phenomenon, the rise of the “authentic” female politician from the right-wing fringe, although both went down in flames for reasons too complicated to discuss here. Newt Gingrich, who briefly looked like the GOP front-runner early in the year, is a peculiarly toxic blend of the two: His sincerity mode feels fake, like a blustering college professor delivering history lectures cribbed from Wikipedia, and his authenticity mode is worse, since Gingrich's attempt to stand for all Americans only reminds us how many Americans are bloated, multiply divorced, pissed-off old white guys. Which, even within the Republican Party, is not a winning image.

Paul Ryan’s appropriation of the sincerity mode – and I have no reason to doubt that he believes what he says and vice versa -- has been highly successful in his career to date, and is likely to play a crucial role in the fall campaign. He’s being deployed in part to take on Obama, who has displayed tremendous skill in communicating with voters who don’t share his highly distinctive class and educational and cultural background. (Obama and Ryan attempted a détente early in the president's term, and I would love to have been a fly on the wall for that conversation, Each apparently found the other insufficiently sincere.) Even more important, Ryan is there to counterbalance Mitt Romney, a presidential candidate who seems – uniquely in recent history – both breathtakingly insincere and entirely inauthentic, a likable fellow stuffed with cash who has no beliefs and nothing to say and represents nothing except enormous tidal flows of capital. Romney may, I suppose, authentically stand for country-club Mormons of the elite caste, but that’s not a significant voting demographic. Despite vague attempts to recast him as a symbolic, Reagan-like figure (well, they have similar hair!) Romney's basic appeal boils down to not being black and not being Obama.

Voters will probably like Ryan, at least at first, and understandably so. His nerdy, scholarly sincerity and modestly appealing small-town history seem like a welcome relief from the hyper-patriotic bogus authenticity of recent Republican political campaigns. His zeal for slashing taxes and entitlements (the thinking goes) will attract the loyal Republican base, and his cordial manner may work on swing voters. He isn’t likely to call Obama names or indulge clandestine birtherism or dog-whistle racism. To many people in the American heartland, he may appear just as intelligent and well-spoken as the president, and a whole lot more “relatable,” as they say on TV. Those are the evident risks for the Democrats in the Romney-Ryan sincerity offensive. The big risk for the Republicans, on the other hand, is that -- absent the grandiose theater of authenticity politics -- people may actually pay attention to their ideas.