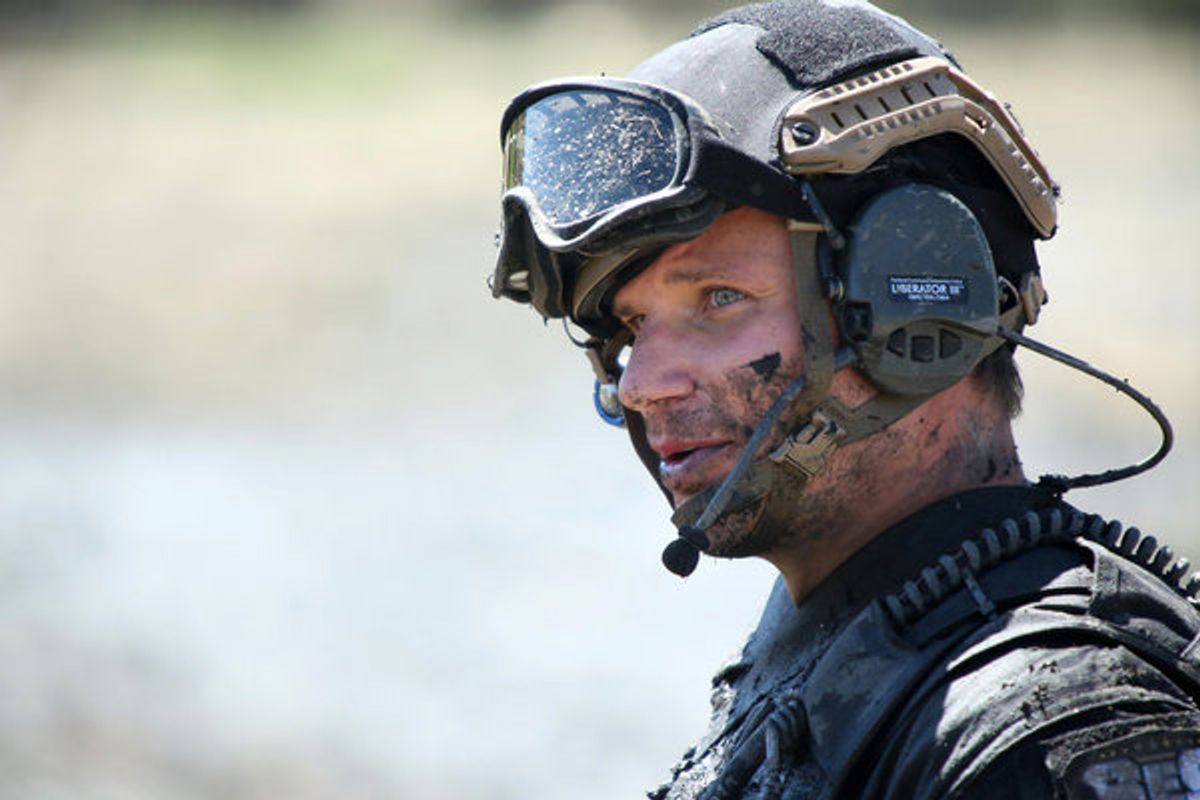 The premise of the show is as follows: Eight “celebrities”— Dean Cain, Nick Lachey, Laila Ali, WWF “Diva” Eve Torres, Terry Crews, “Biggest Loser” trainer Dolvett Quince, Todd Palin and Picabo Street — team up with eight military professionals. The pros include a Green Beret, a Delta Force member with a Fu Manchu, a Navy SEAL, and the greatest sniper in U.S. history, a guy who calmly explains to the camera that it’s estimated he has killed 160 people, among others. Together, they perform long, detailed, explosive missions.

(One side note about Todd Palin: He is always introduced as the "Four-time Iron Dog Champion," never as husband to Sarah. Also, after he does very well on a mission, one of the military guys says, “Next time I go to war, I want Todd Palin on my side." So, that's a thing someone has said now.)

Attempting to give this whole tawdry spectacle a hint of respectability, but actually just giving it the stench of mortification, is Gen. Wesley Clark, who needs better advisers, or at least ones who will keep him from pimping himself out to ethically dubious reality TV shows. Last night, he willingly delivered the line, “I would have loved to command a platoon like this,” to a group of people that includes a WWF wrestler, a guy who used to play Superman and a former member of 98 Degrees. “What a great compliment,” said host Samantha Harris. (Yes, this show has a host.)

To justify the show’s existence, the celebrities are participating on behalf of military charities while trying to call attention to just how much our troops do for us. But leading eight celebrities on choreographed missions involving helicopters, zodiacs, explosives, machine guns and camera upon camera -- what defense contractor landed this commission? -- has no correlation to reality. Not the real kind, anyway. If “Stars Earns Stripes” does any good at all, it is in revealing just how hollow and propagandistic the “doing it for the troops” rhetoric has become. In this case, “doing it for the troops” means a bunch of B-list celebrities drawing salaries and bettering their own brand, while demonstrating just how cool guns are. “Treat your gun like a woman,” says one of the instructors.

“Stars Earn Stripes” is a game. It’s structured like a game; at the end of each episode, a contestant goes home. It sounds like a game: One of the participants utters the reality TV version of “On your mark, get set, go!” by saying, “I’m not here to play games, I’m here to win." And it looks like a game: There are the big explosions of movies, the POV of first-person shooter games, bullets flying in slo-mo.

And it is full of clanking juxtaposition of the We’re respectful and serious, but Hey, watch this blow up in slow motion! variety. This isn’t the fault of the participants, celebrity or military, who seem mired in a macabre-surrealist exercise too complicated to parse from the inside. More blame belongs to the creators. NBC, Mark Burnett and “Law & Order” maven Dick Wolf have tried to do everything they can to skirt offensiveness (those charities, all the rah-rahing for servicemen and women) except, you know, not making a reality TV show that makes a big entertainment of violence and war. Nick Lachey, having figured out the rules of “Stars Earn Stripes” quickly, sums up the show's ethos: “My biggest weakness is I don’t have a lot of experience with guns.”