Augusta National realizes it's 2012, admits two women. Are we all equal now? 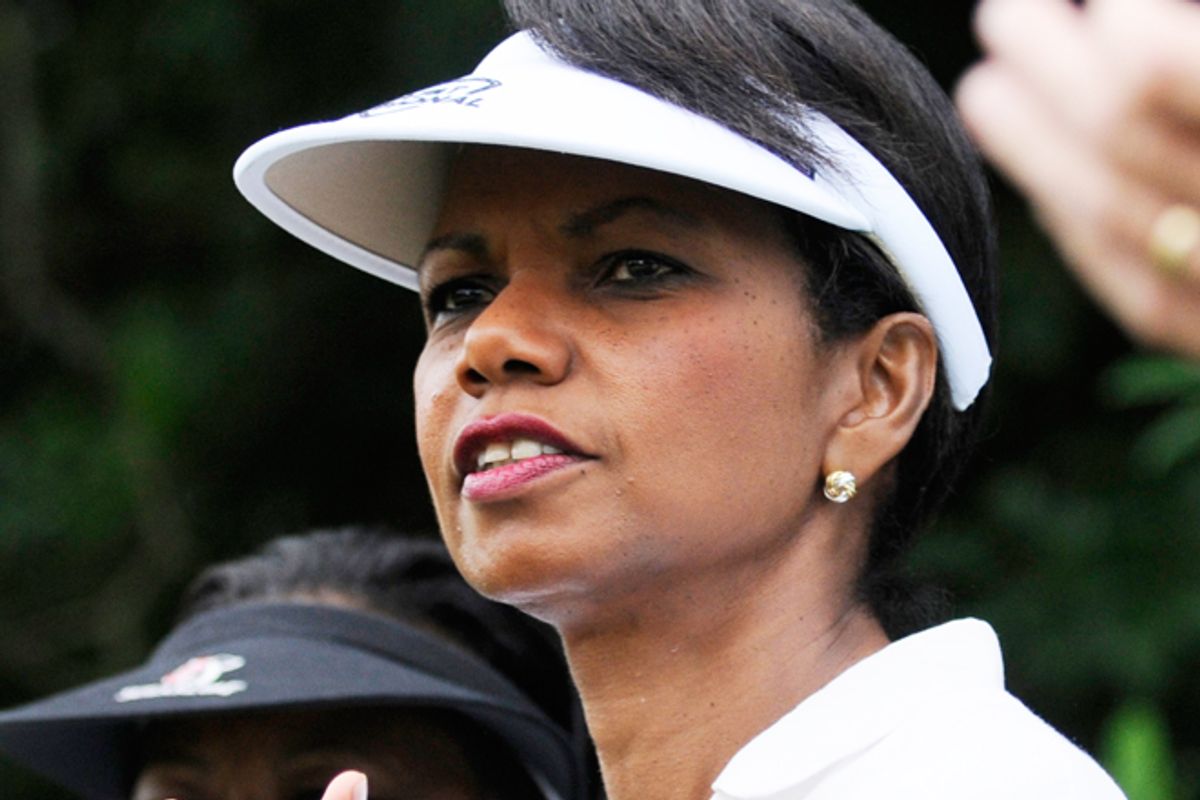 It's a grand day to be a lady. I mean, sure, dudes are explaining to us what rape really is and how we can and cannot get pregnant, our reproductive rights are under attack, we get death threats just for examining sexism in video games, we have magazine articles asking if we're "mom enough," we're reduced to sexist stereotypes even when we excel in the field of athletic competition, and our secretary of state gets crap for her pantsuits.

But Condi Rice has someplace new to golf now. BEHOLD OUR TRIUMPH.

On Monday, Augusta National, the private golf club that is home to the Masters Tournament, announced it has admitted Rainwater vice president Darla Moore and former Secretary of State Condoleezza Rice. When the club reopens in October, they will be the first women in the club's near 80-year history to don its famous green jackets. Augusta National Chairman Billy Payne applauded the new members Monday, saying that "This is a joyous occasion." They now join the ranks of such elite American golf aficionados as Warren Buffett, Bill Gates, T. Boone Pickens Jr. and Jack Welch.

Admission to Augusta is a secretive process. As an Associated Press story Monday revealed, "Prospective members often are not aware they are being considered. Augusta National does not say how much it costs to join or provide figures on annual dues," nor does it reveal exactly how many members it has. And Payne is keeping the mystery going. "We are fortunate to consider many qualified candidates for membership at Augusta National. Consideration with regard to any candidate is deliberate, held in strict confidence and always takes place over an extended period of time," he said. "The process for Condoleezza and Darla was no different."

I wonder if it involved waking up, looking at a clock, and realizing that it's the year two thousand and  -- Jesus Christ are you kidding me already? -- twelve.

Augusta, after all, isn't exactly a bastion of progressivism. For decades, the only way an African-American could get into the club was as a caddy. In fact, being African-American was a requirement for its caddies. The club only admitted African-Americans in 1990, just seven years before Tiger Woods took his first Masters there. Woods, who has traditionally stayed silent on the subject of the club's female-free admissions policy, said Monday, "I think the decision by the Augusta National membership is important to golf. The Club continues to demonstrate its commitment to impacting the game in positive ways. I would like to congratulate both new members, especially my friend Condi Rice." And triple Masters winner Gary Player tweeted that the admission of Rice and Moore was "Great news."

It's been a long time coming – and a day some thought would never arrive. In 2002, when Martha Burk of the National Council of Women's Organizations urged the club to admit females, Augusta's now retired chairman Hootie Johnson said:

We have no timetable on a woman member. And our club has enjoyed camaraderie and a closeness that's served us well for so long that it makes it difficult for us to consider change. As I've said before, a woman may be a member of this club one day, but that is out in the future. And in the meantime, we will hold dear to our tradition and our constitutional right to choose and associate.… The majority of Americans are with us on this issue. I want you to know that…. Do you think girls have anything to offer the Boy Scouts? Do men have anything to offer to the Junior League? No. We're a private club. We have a right to choose and associate with whom we please.

There have been few promising glimmers of hope since. But just last April, IBM chief Virginia Rometty showed up at the Masters and it looked like she was being vetted for membership. Instead, she left as she arrived -- not sporting green. It seemed nothing would ever change. At the time, Jason Gay wrote in the Wall Street Journal: "This charming environment of white-painted cabins and $1.50 pimento cheese sandwiches makes it easy to turn down the common sense, and resist rocking the boat. That is how exclusion survives ... Absence of a female member at golf's most prominent club — not just a folksy conclave in the woods, but the sport's best-known stage, a citadel of corporate power, happily monetizing and broadcasting its event to millions — is woefully out-of-date and should embarrass anyone invested in this event." And GolfWeek's Alistair Tait declared, "The world was rightly indignant 20 years ago when Augusta was found to have no black members. Yet we somehow turn a blind eye to Augusta’s steadfast chauvinism."

Though its chauvinism is steadfast no more, there isn't much dancing in the streets over the fact that two very rich ladies can now pay upward of an estimated $10,000 a year to walk around hitting balls with sticks. Still, it's one more chip in the facade of institutionalized sexism, one more place in the world where the notion that a woman has a legitimate contribution to make isn't so all fired up crazy. It's a small thing, but it's something. And in a world where you can still be called a slut for believing in birth control, hey, we'll take every little victory we can get.

On Monday, Martha Burk said, "It's about 10 years too late for the boys to come into the 20th century, never mind the 21st century. But it's a milestone for women in business … It came sooner than I expected. I thought they were going to try to outlast me." Sometimes, we get to outlive antiquated ideas. It took 80 years, but as Burk says, "Oh my God. We won."