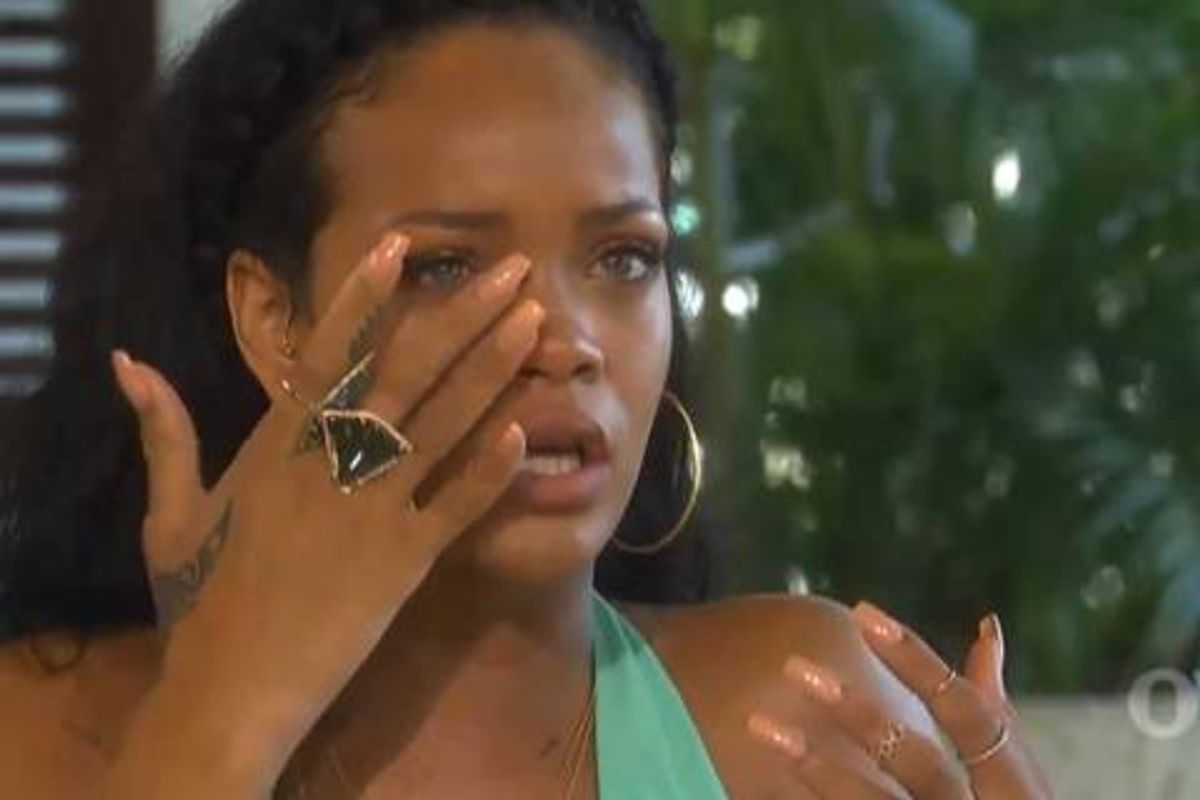 Oprah occupies a particular position in the celebrity interview pantheon. Because she is Oprah, a household deity worshiped for her therapeutic touch, easily as famous as anyone she is interviewing, she gets away with asking prying and open-ended questions no one else could. (Try asking someone you know and love “Who are you?” and see how long they sit there trying to answer thoughtfully. Only Oprah could compel someone to suffer through this particular exercise.) Her interview special with Rihanna, which aired last night on Oprah’s own flagging cable channel OWN, was a case in point.

In the last year, when Rihanna has been asked about Chris Brown, the man who beat her up, a crime for which he is still on probation, she has demurred, lost her temper or blasted out mysteriously provocative tweets. Not with Oprah. For Oprah, Rihanna — relaxed, open, warm, wearing a lovely tropical dress — cried all over herself. Oprah, in a lime-green ensemble herself, passed the tissues.

The takeaway from last night’s special will probably be as follows: Rihanna and Chris Brown are good friends, though they are not in a relationship. The money quotes include: “We are very, very close friends. We built a trust again... We love each other and we probably always will. And that's not anything that we're gonna try to change. It's not something you can shut off if you've ever been in love.” And “He was the love of my life. He was my first love.” And Rihanna’s remark that though the two see each other — most recently in San Tropez —  “It’s awkward. Because I still love him.” But these quotes shortchange the interview, which accomplished the rare celebrity interview feat of complicating a celebrity, showing them to be more tricky and human than they previously seemed, rather than less so.

Asked about how she felt in the immediate aftermath of the abuse, Rihanna said:

It was embarrassing, it was humiliating, it was hurtful, I lost my best friend. Everything I knew switched, switched in a night. … And that’s not easy for me to understand or interpret. … It was hard for me to even pay attention to my mind, and figure things out because it became a circus, and I felt protective. I felt like the only person they hate right now is him. It was a weird confusing space to be in, because as angry, hurt and betrayed as I was, I just felt like he made that mistake because he needed help. And who’s going to help him? Nobody’s going to say he needs help, everyone’s going to say he’s a monster without looking at the source. I was more concerned about him.

Oprah responded with this: “That’s really powerful. You just shocked me.”

Rihanna’s comments are, in their way, shocking. Of all the things one imagined Rihanna felt in those moments — and there has been a tabloid cottage-industry around exactly this sort of imagining — this was not it. It’s both a scary glimpse into the mind of someone in an abusive relationship, who is putting the needs of their dangerous partner before themselves, still, and yet also emotionally generous and true. Chris Brown did and does need help. And he is still widely considered — aided by his history of terrible apologies and violent outbursts — a monster.

Rihanna’s thought process doesn’t exonerate Brown or mitigate what he has done. But it did make plain something it's easy to forget when following celebrities like they’re soap operas or sports events, and not people. It feels different — vaster, stranger, knottier — to be on the inside of an experience, than to be watching it.

Insofar as the Oprah interview made a case for anything having to do with the whole sad Rihanna-Chris Brown saga, it wasn't for others to forgive Brown — “I can't tell people how to feel about it, they can feel anger," Rihanna said — but for others to forgive Rihanna for forgiving Brown. As she said many times in the interview, it happened to her. She feels it more than anyone.

If it's a little disturbing to hear Rihanna say things like, "I thought I hated Chris, but it was love that was tarnished," it's also true what she said of role models, "society has made that title... a title of perfection, which no one can achieve." As Oprah put it, “You did great. I felt your self.”