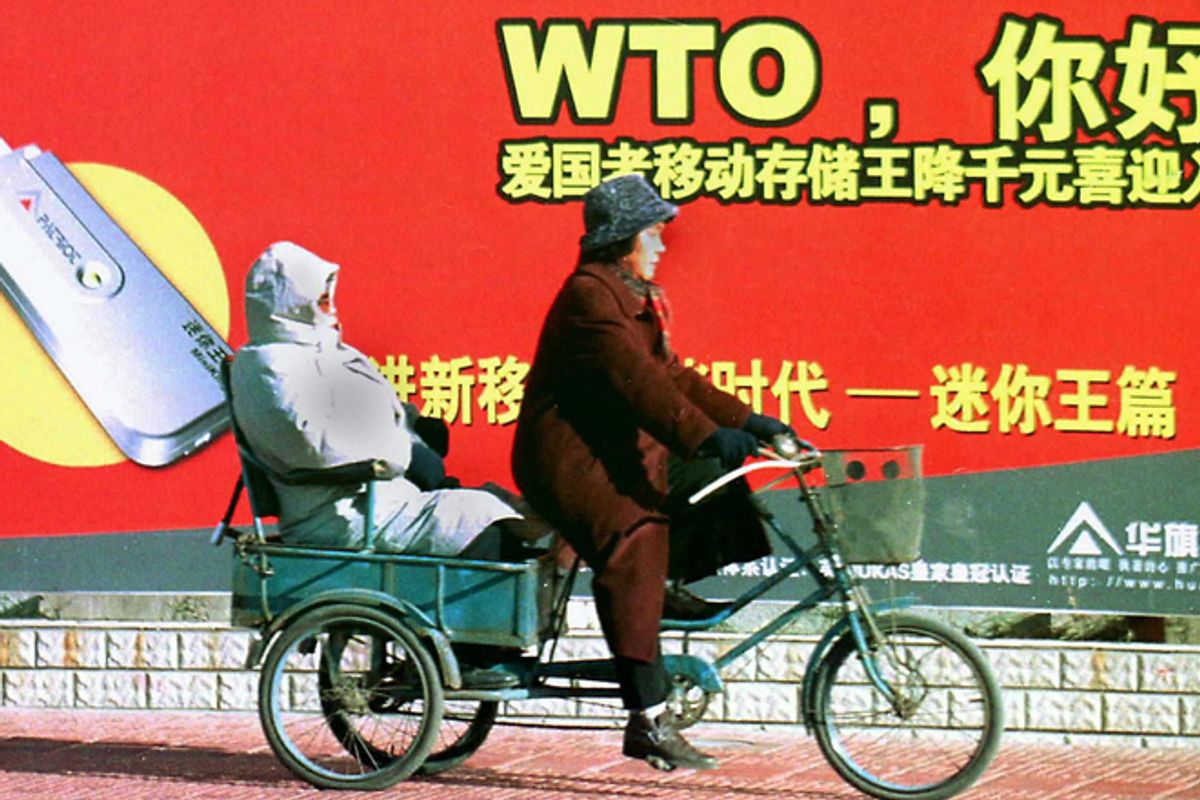 If economist, author, political candidate and now filmmaker Peter Navarro is right – and that’s a big if, on a number of levels – then the long-running conflict between Democrats and Republicans over budget and tax policies is really just a matter of moving the deck chairs around, long after the iceberg ripped the hull open. In Navarro’s view of the world, expressed first in his recent book “Death by China” (co-authored with Greg Autry) and now in a documentary of the same name, the United States’ enormous trade deficit with China and the related disappearance of millions of American manufacturing jobs are the primary causes of our economy’s woes.

It’s a case worth making, and worth listening to, even if Navarro may not be the ideal messenger. A business professor at the University of California, Irvine, Navarro wears several other hats – he’s a technical-minded and rather bearish hedge-fund manager and stock market analyst who often appears as a guest on financial talk shows, and was a thrice-defeated Democratic candidate in Southern California elections. In recent years he’s carved out a niche as an anti-China alarmist, often framing his arguments with apocalyptic language and images that go right to the brink of xenophobic hysteria. In the film version of “Death by China,” we see hilariously crude animations of Chinese bombers dropping “Weapons of Job Destruction” on the United States, or giant billiard balls representing American jobs rolling into sinister red fortresses topped with Mao Zedong’s visage. (To be clear, the film has no odor of anti-Asian bigotry or racism; it includes the testimony of several Chinese and Tibetan activists, along with prominent Asian-American China skeptic Gordon Chang.)

That dramatic overkill is both unfortunate and unnecessary, because the questions Navarro asks about our deformed and dependent relationship with China are legitimate and troubling. As AFL-CIO head Richard Trumka puts it in the movie, a nation that no longer manufactures its own basic consumer goods can hardly be said to have a functioning economy at all, and the United States has gone well past that point. One way of expressing it is that global capitalism in the so-called free-trade era is performing a massive experiment to see whether driving down the price of consumer goods in the West can offset the devastating effects of job losses and an overall downward trend in real incomes. For a while, the trade imbalance and all that cheap Chinese-made crap at Wal-Mart and Target helped to mask our economic decline, and make it appear that the American standard of living was still rising even when it wasn’t. Now, though, not quite so much.

Political leaders of both parties presumably did not foresee an American trade deficit with China that’s in the ballpark of $3 trillion – or an estimated 2.8 million lost manufacturing jobs and 57,000 shuttered factories – as they aggressively pursued free trade relations with the world’s largest nation over the past several decades. And given the realities of who calls the shots in American politics (i.e., the major corporate donors), they are also neither willing nor likely to do anything about it. It might be reassuring to blame a particular party or president for this calamity, and Mitt Romney, like other candidates before him, is giving that a whirl. No dice, Willard: The China policy pioneered by Richard Nixon and Henry Kissinger in the ‘70s has been pursued by every subsequent administration, most avidly by George H.W. Bush and Bill Clinton, who personally championed China’s 2001 entry into the World Trade Organization. (A more general observation: The more time you spend examining the actual records of those two genial presidents, the worse they look.)

Much of the argument Navarro assembles in “Death by China” is unassailable as to its basic facts, even if the tone and manner of presentation leave much to be desired. As is now obvious to the entire world, the Chinese nation took to capitalism with a vengeance after reformatting its economy in the late ‘80s, and has outcompeted most other manufacturing countries in most sectors since joining the WTO a decade ago. With infamously lenient standards on workplace safety and environmental protection, a history of forced labor and child labor, and a whole litany of underhanded tactics ranging from currency manipulation to illegal export subsidy to copyright piracy to corporate espionage, China has become an economic superpower in record time by creating an irresistible honey trap for global capital.

Now, the Chinese certainly did not invent any of these time-honored capitalist practices, as a reading of Chapter 10 in Karl Marx’s “Capital,” with its memorable account of the abuses heaped upon workers in 19th-century England, should make clear. They have, however, absorbed these lessons rapidly, and hybridized them by attaching a ruthless, post-Fordian mode of production to the power of an autocratic state. Remember when we were told, in the wake of the Tiananmen Square protests 23 years ago, that opening up trade with China would lead, gradually but inescapably, to political reform and democracy? Because capitalism came with some kind of magic fairy dust that would sprout into free elections, the rule of law and a functioning civil society? That all sounded very sweet, but China’s top-down, one-party political structure appears as rigid today as it was in 1989, if not more so. (If dissident artist Ai Weiwei’s international celebrity has not protected him from being persecuted, beaten, tortured and imprisoned, what happens to ordinary people?)

I don’t claim to know what should or even could be done to reverse 20 years or more of global, infrastructural economic change; it’s not like American manufacturing can be restored to its 1975 levels with the stroke of a pen. Navarro’s general recommendations – pursue trade reform with China that will rebalance the ledger at least a little, and strike a tougher, more consistent tone on China’s abysmal human-rights record – sound sensible enough. Intriguingly, the experts he assembles in “Death by China” largely come from the same unusual left-right coalition that opposed the 1990s wave of neoliberal globalization in the first place (perhaps the only occasion when Pat Buchanan and Jesse Jackson have ever agreed on anything). We see labor leaders, Rust Belt Democrats, right-wing Republicans, Chinese human-rights activists and a somewhat fringey array of economists, all lamenting the fact that most of the stuff we wear and use every day, from shoes and jeans to laptops, iPhones and TV sets, was made in China.

This film is narrated by dyed-in-the-wool lefty Martin Sheen, and features the arch-conservative Rep. Dana Rohrabacher, R-Calif., as one of its heroes. You won’t see that every day. But Navarro blunders into the deep waters of Rohrabacher-style paranoid politics when he draws explicit parallels between the current Chinese regime and Nazi Germany, arguing that Hitler’s government in the 1930s was the last nation to build up its military as fast as China is now. Even if that’s true, and even if China intends to establish itself as a hegemonic regional superpower (as seems logical), it does not follow that the Chinese leadership has any interest in conquering and subjugating its neighbors, or in launching a suicidal world war. That China will be this century’s leading economic power, and will control most of the Western world’s massive debt, is now beyond question, and ought to satisfy its leaders’ egos. Ruling the whole world overtly and by force, in service of some lofty ideological goal, is so last century.

If that feels like Cold War hangover thinking rather than a sober assessment of our nation’s admittedly dire present predicament, you could say the same thing about much of “Death by China.” Navarro never discusses the considerable internal discord, debate and dissent within China, acting as if a nation of 1.3 billion people and its enormous bureaucratic apparatus were a monolith. Arguably, the Chinese have moved more rapidly to protect workers and the environment than most outsiders expected, and even a totalitarian state cannot control the tidal flow of global capital indefinitely. As Chinese workers have begun to fight for their rights and wages have risen for skilled labor in the coastal provinces – and there we are back in Marx’s Chapter 10, reading about “the struggle for the normal working-day” – jobs have begun to flow out of China to lower-wage economies like Vietnam, Indonesia and Malaysia.

History may well record that the exporting of millions of American manufacturing jobs to China was a catastrophic event that augured irreversible economic decline. But America’s economic decline, and the exodus of industrial labor to cheaper and less regulated environments, was already well underway by the time trade with China exploded in the 2000s. (By most estimates, more American jobs were lost in the '80s and '90s than have been lost since 2001.) Navarro surely remembers the mid-‘90s, when the big economic and cultural boogeyman was Japan, sometimes presented by hysterical nationalists as waging a war of quiet conquest in retribution for Hiroshima.

China’s opportunistic mastery of capitalist strategy and tactics, and its rise to global predominance, has undeniably created a challenging new situation for America and the West. But China will sooner or later be subjected to the same cyclical phenomena that sank the Japanese economy, and anyway China per se is not the problem. The problem is capitalism itself, or at least the post-Reagan version of corporate capitalism that has been endorsed not just by China’s so-called Communists but also by every major political party in every Western democracy: an unregulated, undisciplined and immoral global economic system that recognizes no national borders, abides by no social contract and thinks only in terms of short-term profit.

"Death by China" is now playing at the Laemmle Playhouse 7 in Pasadena, Calif., and opens this week at the Quad Cinema in New York, with many other cities to follow.