In a mixed-income development will the poor and the well-off interact -- or not so much? 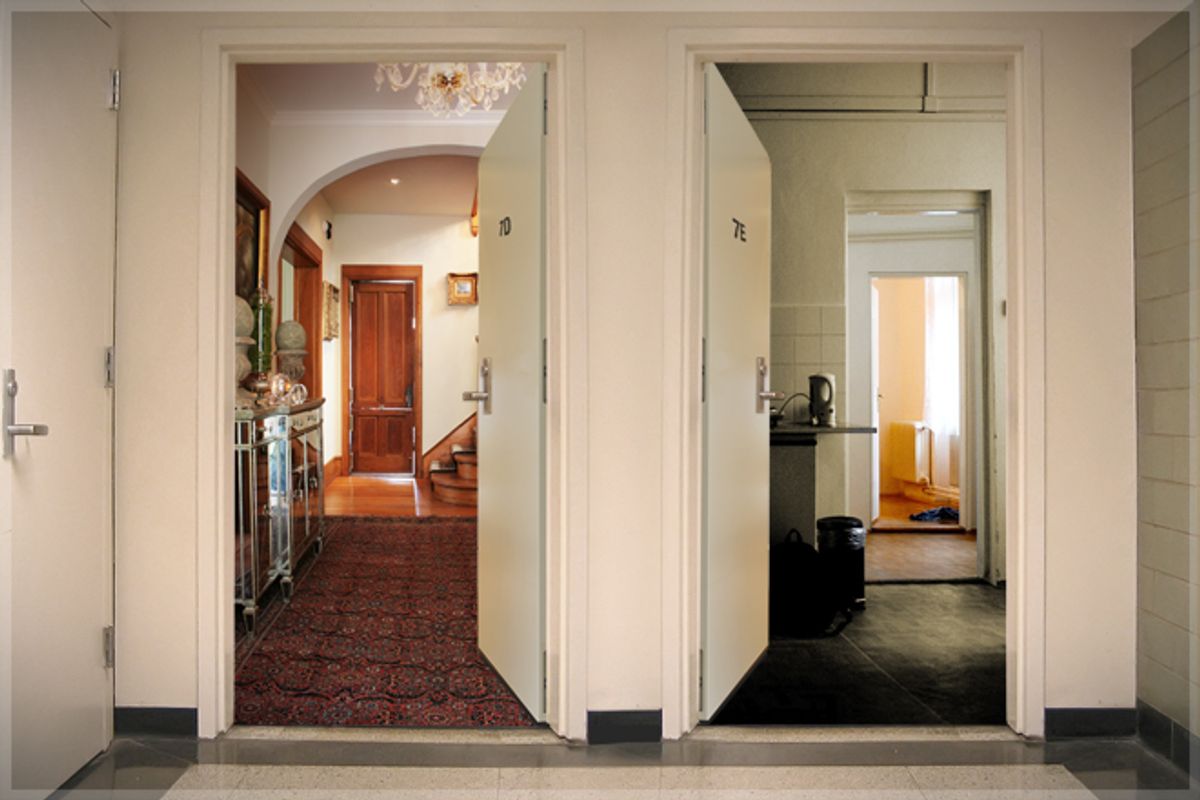 On the corner of Larabee and Division Streets in Chicago, a woman named Andrea stands in front of her home, a quasi-public housing development with a surreally pristine, Ikea-esque veneer. We're only steps from where, in 1997, 9-year-old Shatoya Currie was raped and nearly killed at the Cabrini-Green housing projects, the last of which was torn down last year.

Andrea, a black woman in her 30s wearing a gray sweat shirt and texting on a flip phone, moved here from Milwaukee in 2007 to take advantage of this new development, called Parkside at Old Town. It's part of the Chicago Housing Authority's sweeping "Plan for Transformation." The $1.6 billion Plan is basically this: get the well-off and the poor to live side by side by offering market-rate apartments, subsidized apartments and homes to the former housing project residents, all in the same buildings.

"They still be gangbangin' out here at night," says Andrea of the neighborhood. Still, it's nothing like it once was. There's now a supermarket, a Starbucks, bicyclists riding by, and these immaculate apartment buildings. Andrea says it's the nicest space she's ever lived in. A 150,000-square-foot Target is in the works, and an urban farm sprung up nearby in 2007.

But though Andrea likes the new buildings and the neighborhood, she recognizes that this sort of carefully engineered milieu is an environment that doesn't exactly feel natural, even to the people who live here. "We have meetings where people talk to each other," she says, referring to activities organized by the management. But aside from that, she says there's not much interaction between the low- and high-income residents. "You can't barbecue on the property," says Andrea. "People aren't really hanging out together."

As if on cue, a young white woman with a Coach handbag on her shoulder steps out the building's front door, into a waiting BMW X3, and glides away without a glance.

Everyone loves diversity in theory, but real estate shows our true colors: Since the '80s, segregation by income has risen in 27 of America's 30 largest cities, according to a recent Pew study. "We know over the entirety of human history that people have a tremendous tendency to cluster among themselves, whether in tribes, whether in nations," its author told the Atlantic Cities.

Nevertheless, Chicago, like several other cities, has been shifting its public housing policy from the old Cabrini-Green model to a mixed-income strategy, which attempts to lure people of varying means into single developments. "Poverty deconcentration is the way of the day now in terms of housing policy," says Mark Joseph, an assistant professor of social sciences at Case Western Reserve University.

How well this works remains an unknown. It's a given that it's a better model than the old one. At places like Cabrini-Green, "People were cut off. Physically and psychologically, they were a city apart," says Joseph. Mixed-income developments, the thinking goes, help eliminate those barriers, making supermarkets, banks, restaurants and the municipal government itself more likely to have a presence there.

And theoretically, there are intangible benefits, too. Social interaction between high- and low-income residents could lead to job networking, and cut down on what sociologists call social disorganization. And there's some fairly contentious potential. "A more controversial one is around role modeling," says Joseph. "There are those who say that one of the things missing in the inner city is role models who can provide middle-class values."

But the common thread that binds many of these theoretical effects is the same: For them to occur, residents of extremely different incomes must connect on a deeper level than hellos in the hallways. And that doesn't seem to be happening. Joseph, along with Robert Chaskin of the University of Chicago, documented and analyzed the interactions of residents in two of Chicago's new mixed-income developments. Far from job networking, most of the encounters between residents were paper-thin. Nearly 25 percent didn't know a single neighbor well enough to ask them a favor or invite them into their home. In the rare instances of deeper exchanges, like "looking out" for a neighbor with an illness, these interactions occurred almost exclusively between people who were in the same income group.

"In general, at both sites [studied], residents report low to modest levels of interaction, and the interaction they describe is overwhelmingly casual," concluded the researchers.

Of course, this sounds like a lot of buildings; how often do you have your neighbors over for spaghetti? "Cities develop new norms of noninvolvement," wrote urban psychologist Stanley Milgram in 1970. By which he meant, when you live in the city, it's normal to cherish your personal space. But Chicago's experiment demands that these residents overcome that instinct to some degree. Most of these mixed-income developments are in troubled areas where little existed after the projects came down, so the city is banking on these people, who don't have a lot in common, to create a community from scratch.

Community building doesn't need to mean picnics in the park, however, says Joseph. "It doesn't necessarily mean everyone becoming friends and having dinner. It means a set of neighbors who appreciate the fact that living in a diverse place means having to build common ground with people who are different than yourself." He calls this positive neighboring.

If positive neighboring is happening at Parkside, though, so is negative neighboring. The day I visited, a sign taped to one apartment window had a picture of a handgun pointed at me, along with the words, "I Don't Call 911 -- No Loitering."  There have been reports of market-rate tenants being the targets of derogatory name-calling, and subsidized tenants having the police called on them anonymously for hosting parties. A feature in Harper's magazine reported that when market-rate families felt threatened by large groups hanging out in the lobby at one mixed-use development, the management removed all the furniture. The same article described the fates of two different Parkside families that held loud gatherings at their apartments one night: The next day, the public-housing unit got an eviction notice; the market-rate unit did not. "They can get buck wild, but as soon as we get buck wild, they want to send an email blast to CHA [Chicago Housing Authority] to complain," said one of the subsidized tenants.

Critics of the model have asserted that this is what happens when cities engage in "social engineering." But it might be more accurate to say that the social engineering that the city was counting on isn't happening. Parkside's residents might have been more interested in a killer deal than building a community. (The market-rate condo prices, in the $150,000's, are a steal for the location, a mile from downtown and steps from the Gold Coast.) "Could it be -- and could people be afraid to admit -- that market rate buyers simply don't want to live right next door to government subsidized renters?" asked one Internet commenter.

That's probably too harsh. These developments are still in the very early stages, relatively speaking. "What's come out of our research has been a realization that the us-and-them dynamic isn't something that just emerged when people move in -- it's something people brought with them," says Joseph. The mixed-income model is precisely about providing a space for breaking down that dynamic. "When you ask people what they'd like to see here, people across income and racial categories have similar answers: a safe, secure, quiet neighborhood where kids can play and people are respectful. Unfortunately, there haven't been enough venues in these places for residents to show each other they have a lot in common. But there has been space for minor annoyances to become friction."

Joseph says the key is creating amenities that "attract across a broad range. I think what contributes to the us-versus-them dynamic is residents trying to figure out, who is that exercise facility for? Who is that computer lab for?" The developers, however, have sometimes done just the opposite -- prohibiting certain group activities, eliminating spaces where people might loiter. "I understand that impulse, but then you create spaces where people don't run into each other in informal ways."

The whole project essentially boils down to the idea that design can generate interactions between people who don't normally interact. It's a gambit as uncertain as the towering projects that Chicago and many other cities built 50 years ago, and its outcome could influence other new public housing projects across the country. In the meantime, the residents of these are concerned mainly with their own fate. "It's an experiment," one resident told a reporter, "but you're playing with people's lives."