One of Paul Ryan's main assets was his popularity in the media. After his dishonest speech, it may be blown 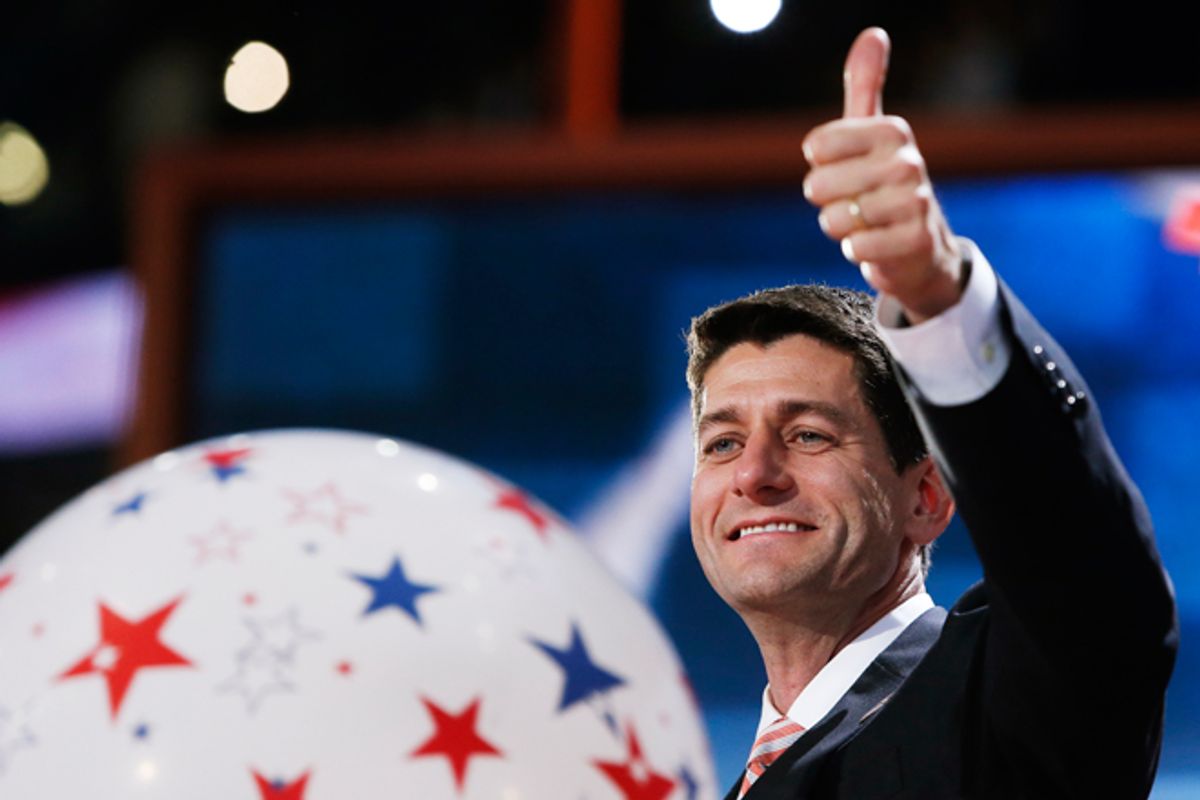 We don’t expect much of anything unexpected to come out of the conventions, and in particular the big speeches from the nominees almost always go well. And yet in Tampa this week, Paul Ryan gave a speech that may well have real, lasting and very negative consequences for the ticket.

One way to think about vice-presidential candidates is in terms of the resources they bring to a ticket. Those might include popularity in a swing state, as when Dwight Eisenhower chose Richard Nixon; ability to raise money, as when John Kennedy picked Lyndon Johnson; policy expertise to cover a nominee’s weakness, as when Gov. Ronald Reagan added foreign policy experience in George H.W. Bush; or support from an important party faction, seen in John McCain’s selection of Sarah Palin.

The idea is that any politician important enough to be considered will probably control some politically useful – and at least potentially transferable – assets.

Paul Ryan? He brought two resources to the Romney campaign. One was the enthusiastic support of conservatives. That’s something that Romney wanted to have, and it is intact after the convention. But it’s not exactly a scarce resource, because as we know the Republican Party is well-equipped to stir up support for even the most unknown candidates; just think back to the passionate embrace of the previously unknown Sage of Wasilla within hours of when she was chosen in 2008.

The other, and the one that really might have been valuable, was Ryan’s reputation with the neutral press and many pundits as a wonk and as a truth-teller. After all, Romney himself was running a campaign that was relying more on his reputation for competence than for actual policy proposals – and a campaign that was already being challenged for not always sticking to the facts. Ryan, perhaps, could transfer some of his reputation to Romney. And indeed, the immediate reaction of Ryan’s cheering gallery was to conclude that now we would have a Serious Argument about Big Ideas (which, for such people, is always assumed to be a very good thing. I’m not so sure).

That was then. On Wednesday, Ryan spoke, and while I think his speech probably worked fine for most voters who were watching, the reaction from one group was quick and unanimous: the fact checkers (and many others) called him out for flat-out lies. Now, in the immediate aftermath, both Steve Kornacki and Alex Pareene wrote about the powerful tendency of the press to just ignore that sort of thing, and both saw early signs that this case would be no different.

However, that’s not what’s happened.

On Firday, both the Washington Post and especially the New York Times published scathing stories about Romney/Ryan and mendacity.

Rosalind Helderman in the Post gets right to it:

Did Paul Ryan bend the truth?

The verdict, rendered by a slew of media fact checkers, was immediate and unequivocal: In his first major speech before the American people, the Republican vice presidential nominee repeatedly left out key facts, ignored context and was blind to his own hypocrisy.

Even more damaging to Ryan is Michael Cooper’s New York Times piece, complete with the non-neutral headline, “Facts Take a Beating in Acceptance Speeches” (and note the URL “www.nytimes.com/2012/08/31/us/politics/ryans-speech-contained-a-litany-of-falsehoods.html”) Once again, Ryan in particular comes under heavy fire.

Both of these stories include a to-be-sure paragraph finding an instance recently in which Barack Obama’s team was called out by the fact checkers. But in both cases, the story we’re told is that the Romney team is clearly at fault here.

This is serious stuff. Instead of leaving it to the fact-checker ghetto, the major newspapers are directly calling Ryan (and to a lesser extent Romney) out as a liar, and in the Times it’s done in the reporter’s – the newspaper’s – voice, and not that of some third-party expert.

It’s too early to know for sure, but I think there’s a very good chance that Ryan’s reputation has taken a serious hit. Not, to be sure, with partisan Republicans. But these two articles, along with other evidence of serious pushback, suggest that the deficit-scolding section of the press is, finally, fed up with him. And the thing is: If they do start looking, there’s plenty more to see. If, for example, Ryan no longer gets the benefit of the doubt from deficit hawks, they might start to be a lot less likely to give him a pass for his Bush-era budget-busting votes, or for the fact that even on his own terms his budget doesn’t get to balance for a long time, or for the phony math on both spending and revenues that allow him to claim any deficit reduction at all.

Moreover, the very nature of the traditional running-mate role means that Ryan will probably wind up at least pushing the edges of the truth again and again – so it will be relatively difficult for the press to forget this episode or to wall it off as an anomaly.

My guess? Ryan’s reputation will not survive the campaign. And that means that the biggest resource he might have brought to the Romney campaign has been destroyed just as the campaign was getting started.