Everyone needs an anthem

In the darkest moments of my life, pop music came to the rescue -- and it stayed when things got better 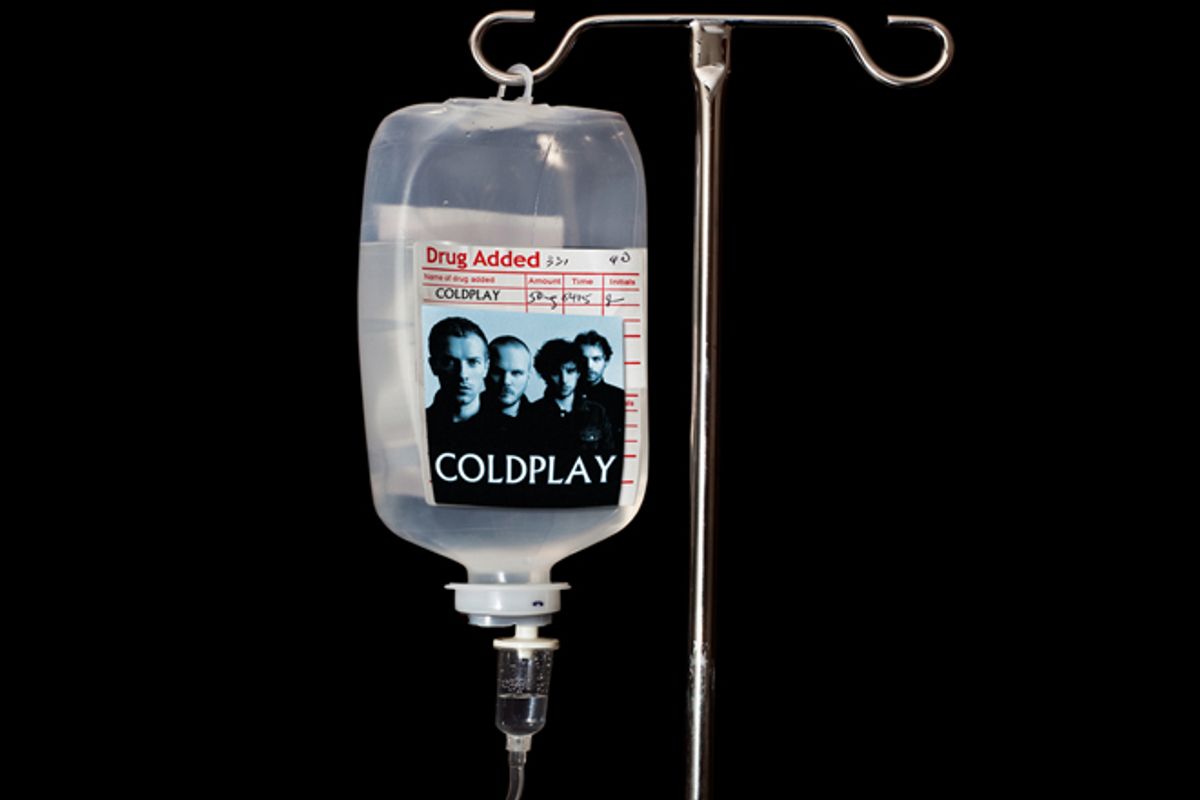 Even though I have to go to 53rd and 3rd, I always get out of the subway at Columbus Circle and walk the rest of the way. When it's over, I retrace my steps and walk back. It's about a mile and a quarter and it takes roughly twenty minutes. I've done this walk in downpours and in snowstorms, on perfect springtime mornings and oppressive, record-breaking hot summer days. I could transfer over to the E train, which would drop me off pretty much right below Sloan-Kettering's doorstep, but I don't. I don't because I need those 40 total minutes of my treatment days and doctor visits to stick my headphones in my ears and drown out the fears and fatigue, to psych myself up and wind myself down. I need that time for my cancer playlist.

We apply our most magical thinking to our favorite songs, playing them in endless loops and singing along as if in prayer. We believe them, because somehow a message with a melody becomes a kind of holy truth. Our truth. Our love. Our heartbreak. Our fear. And our fearlessness. Why did "We Are Never Ever Getting Back Together" rocket to the top of the iTunes chart the day it was released? Not because Taylor Swift is so cute. It's because a million people heard it and immediately thought, "That girl is singing my life." It's because sometimes our deepest truths are buried in our pop songs.

When I was diagnosed with cancer the first time, I didn't rush to make a public announcement right away. (I waited two whole days for that.) But what I did, that evening, was post a video on my Facebook wall of the song I'd been playing continuously all day. The one I had listened to over and over as I sat crying at my desk, because it contained the words I needed most to hear. It was Modest Mouse's "Float On." "Don't worry," Isaac Brock told me, "even if things end up a bit too heavy, we'll all float on." And I knew I'd found my first cancer anthem.

Others quickly followed, lined up like little soldiers in my iPhone. It was a natural reaction. All my life I've been making mixes – declarations of ardor for boys and Best Summer Jams and Ultimate Power Ballads. I am unabashedly enraptured with pop music – and highly susceptible to it. Hell, I once initiated a breakup because I'd heard "How to Save a Life" at an especially vulnerable moment. I just never thought I'd be compiling my music collection into Songs to Have Cancer To. Still, it was a task. One I knew I'd need.

I spent the following days after my diagnosis cranking up my youthful, '80s-era hits as I went on my morning runs, amazed at how each one of them seemed infused with a new significance. Suddenly songs I once partied to could move me to tears.

In this world we're livin' in we have our share of sorrow. Answer now is don't give in -- aim for a new tomorrow. Forget the hearse 'cause I'll never die. I got nine lives, cat's eyes. Using every one of them and running wild. That's okay; lets see how you do it. Put up your dukes, let's get down to it. Like skyscrapers, rising up, floor by floor, not giving up. And if I only could, I'd make a deal with God. You gotta fight. For your right. To paaaaaartay.

And then, a week after my diagnosis and right in time for my surgery, an infectious, bubbly, instant hit dropped. I didn’t care that it was about a heartbreaking gold digger. I only cared that Cee Lo Green's chorus was an excellent excuse to not merely say but sing, at top volume, "Fuck you – oooh oooh ooh." Onto the playlist it went.

In the weeks that followed, the news was good. My oncologist declared the surgery a success and told me I appeared to be cancer free. But my diagnosis had created a new long-term relationship in my life, with doctors and tests and monitoring and regular trips to 53rd and 3rd. Don't it, as the Ramones would say, make you feel sick? I expanded my playlist, asked friends for suggestions. There aren't a whole lot of Cancer Sucks songs besides Martina McBride's supportive "Love You Through It," but there are plenty of I Will Get Through This So You Can Just Suck It anthems. In fact, they account for about 50 percent of all non Let's Get Down, Baby-themed popular music.

Then, just when it seemed things were getting back to normal and my friends were calling me a "survivor," things got very bad. A surgical biopsy revealed that the cancer had spread to my lung. And when I pointed out a strange bruise during a checkup just two weeks later, it turned out to be another tumor, rocketing me to the top of Stage 4 charts with a bullet. What followed, fortunately, was a successful clinical trial and, months later, a return to health. It also meant many, many more round trips to 53rd and 3rd. Many hours walking from the west to the east side of Manhattan, passing tourists staggering around in wonderment and commuters hustling briskly to their offices as I darted through the streets to my private soundtrack. And on the days I felt I couldn't face the suspense of another test or the pain of multiple blood draws or the exhausting side effects of treatment, the right tune could push me to power through it.

I would play songs that had steered me through tearful breakups and scary cross-country moves, songs that had made me smile when they came on an oldies station on a car radio. I played dopey, top-40 hits specifically calculated to be embraced by shallow teenagers and end up in the trailers for Katherine Heigl rom-coms. There was an awful lot of Pink and Avril Lavigne. You can laugh at my crummy taste in music, but let me tell you this – when you are facing the very real possibility of dying within a year, you really stop giving a crap about how cool your iTunes library is. You realize that no one is going to write "She secretly liked Coldplay" on your tombstone. Instead, you start thinking about how you'd like U2's "Walk On" to be played at your memorial.

As time has gone by, I've added more songs. I heard Gym Class Heroes' "The Fighter" for the first time the day after I learned my friend Phoebe died of breast cancer and it gutted me senseless. Yeah, that's right -- a song involving Ryan Tedder left me curled up in a ball on the couch. Got a problem with that? Gonna live life 'til we're dead. Give me scars, give me pain. Then they'll say to me, there goes the fighter. I saw the video of Kelly Clarkson's "Stronger" featuring patients of a Seattle children's cancer ward and it delighted me as it ravaged my heart.

I am doing extraordinarily, odds-defyingly well. But I have 14 more months of maintenance treatments left, and after that, if I am lucky, a long lifetime of doing that walk from Columbus Circle to 53rd and 3rd for checkups and CT scans and MRIs. I know music hasn't saved me. Drugs and doctors have. Music has done something else, though. It's sustained me. On my worst days, on the interminable cross-town walks waiting for results, it's made me feel, instead of like some broken-down collection of tumors, like Kool Moe Dee. It's made me feel, on the days when my doctor has greeted me with a smile, like Primal Scream. And no matter how uncertain the future may be, when the Five Stairsteps tell me that things are going to get easier, I always, always believe them.