In the season finale, Walter White almost gets away with all of it. 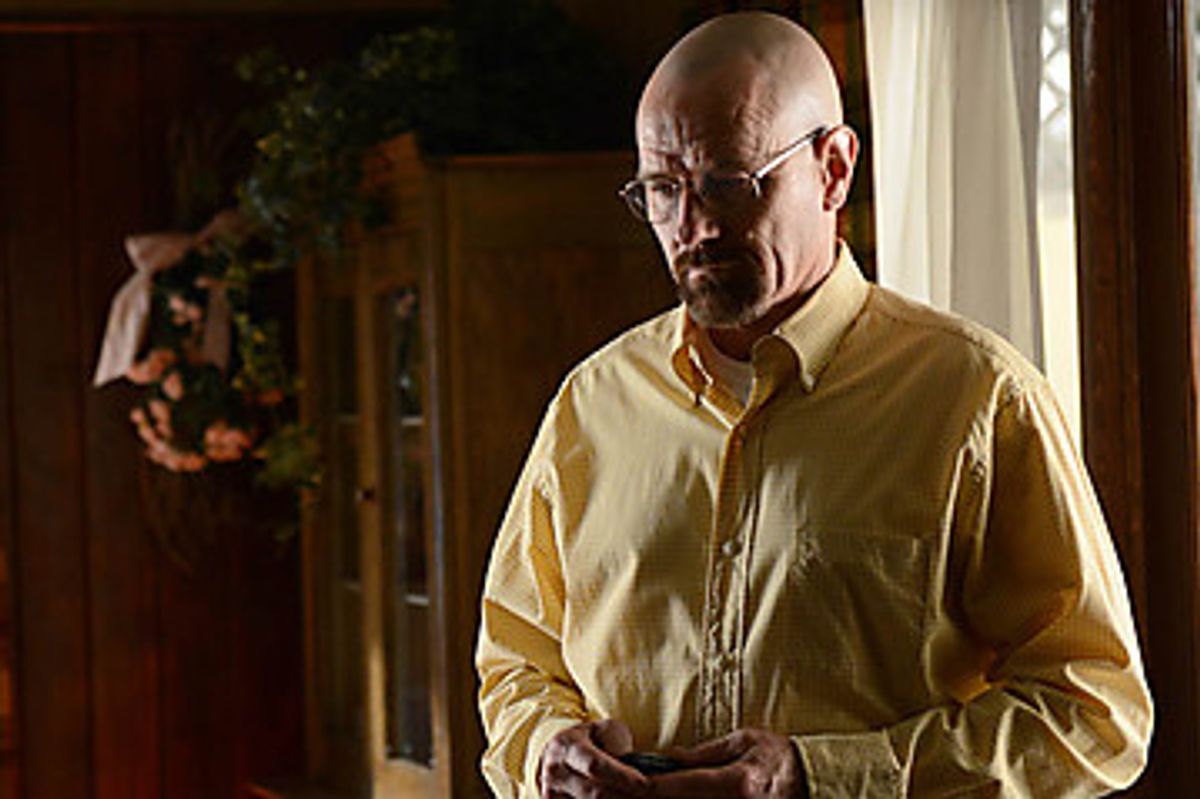 For those “Breaking Bad” fans somehow still hoping that Walter White and his family might be able to walk away unscathed from the sociopath he’s become, the season finale was a sort of tease. As in, here is what Walter White getting away with it would look like. Please be sure to take an extra close look. Because Hank Schrader is going to spend all next season, “Breaking Bad’s” last, making sure that exactly this does not happen.

As is the fashion for serious dramas these days (see: “Mad Men,” “Game of Thrones”), the “Breaking Bad” finale was not nearly as amped up or grueling as the penultimate episode, in which Walt killed the loveable, phlegmatic Mike. Walt’s transformation into a horrible, amoral man is now so complete that the aftermath of Mike’s death— what to do with Mike’s car, Mike’s body, and Mike’s 10 chatty associates— could be dealt with quickly and calmly, no fuss, no emotion. Walt has broken so bad his decision to hire some neo-Nazis to mastermind the grisly, simultaneous deaths of 10 imprisoned men took up less than five minutes of last night’s episode. The murders went down to the jarringly smooth sound of “Pick Yourself Up,” a song with lyrics about getting to “start all over again,” because that is exactly what the murders were for Walt: a smooth way to begin anew, stabbings and burnings having become as breezy a thing to Walt as Frank Sinatra's crooning.

And so Walt starts all over again. He and Todd make meth and money, meth and money, meth and money, and three months pass— another montage marks the time, this one scored to “Crystal Blue Persuasion,” a song you know Vince Gilligan has been hanging on to for years— one of the longest periods “Breaking Bad” has ever jumped over. When the three months are over, Walt has a pile of money the size of a small car and no one telling him what to do. His ego has gone into remission. He pays Jesse the money he owes him — cagey, soulful Jesse knows enough to be scared of Walt, shaking and with a gun in his waistband for their entire conversations— and agrees to get out of the business when Skyler asks him to. The second to last scene of the finale is Walt, his wife, his children, Hank and Marie sitting around the pool, joking around, enjoying themselves. This is what Walt getting away with it looks like.

But it doesn't last. The entire episode was stuffed with call-backs to previous events. In the opening moments, Walt is staring at a fly, undoubtedly thinking about that time he became consumed with killing one. The fateful copy of “Leaves of Grass,” signed by poor Gale Boetticher, is sitting right outside of Walt’s shower early in the episode. There’s the dented paper towel dispenser at the doctor office. He and Jesse reminisce about their crappy drug-lab RV. As the episode unfolded these reminders seemed like Easter eggs, winks at long time viewers, but they were actually time bombs, exactly the sort of endless, potent details Walt fancies he can control. That copy of “Leaves of Grass,” sitting on the back of the toilet seat under two magazines, was waiting for Hank, who in the episode’s final moment finally realized exactly who his brother-in-law is. This wasn’t an episode about how a murderous sociopath gets away with everything, it was an episode about how even a murderous sociopath can't control everything. It was about how the guy who needs to believe he is smarter than everyone — who is smarter than most everyone— gets busted because his brother-in-law likes to read things while he takes a shit.

This shortened season of“Breaking Bad”— just eight episodes— has often felt rushed. Walt has been a bad guy for a long while now, but these eight pushed him into full-blown monster mode, hard. His transformation into a Scarface has been ongoing, but this season it got downright abrupt. Certain repetitions were more noticeable than they might have been. There were two “MacGyver”-type episodes in near succession: the magnet escapade and the train heist. Last week’s episode had two montages to cheerful music. This week's had another two. But there is now nothing ahead of us but the long-awaited Walt and Hank showdown, and nothing— not even Walt’s day-to-day meth-making— to get in its way. Eight episodes should be enough to finish up Walt's story. When it's all done, tonight's episode will be, hopefully, the closest he ever came to a happy ending.