Get off Kate Middleton's back, Katie Couric 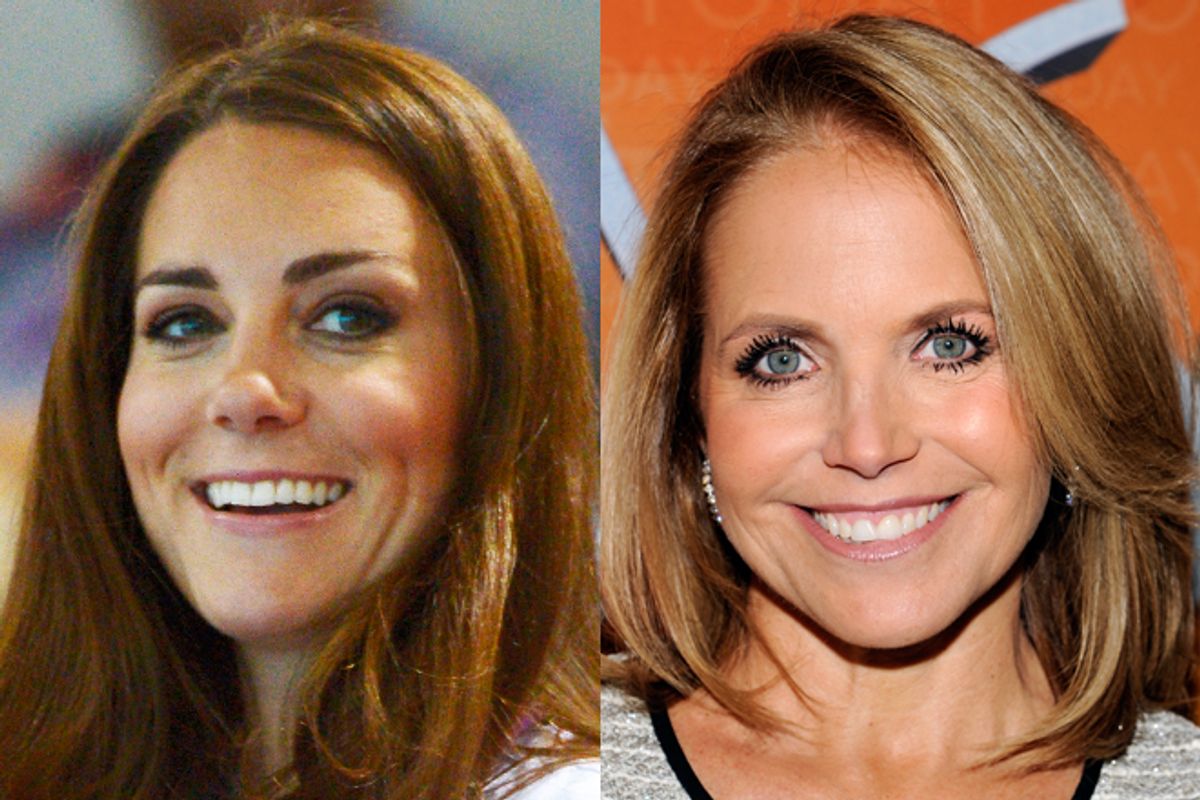 Because apparently this bears restating on a daily basis, here's your Wednesday reminder. Don't snark on women's bodies. Don't judge them based on their weight. If a member of the female sex does not conform to your ideal image of what her size should be, you know what? Keep it to yourself, concern troll. This one is going out to you, Katie Couric.

Couric's syndicated talk show doesn't debut until next week, but she is already wading into controversial subject matters – albeit unintentionally. A Tuesday profile in USA Today -- a story, by the way, in which writer Gary Levin referred to the 55-year-old Emmy- and Murrow-award-winning former "Today" and CBS Evening News anchor as both a "girl" and "gal" -- mentioned Couric's response to a test audience member's question about a dream guest. Kate Middleton, she declared, before adding, "I think she's getting too thin."

It was a sentiment Couric also expressed in an interview with SheKnows.com this week, when she said Middleton "has comported herself so well since she has been thrust in the limelight." She then said, "I feel like she needs to eat more, because she's too thin." Maybe on an upcoming episode, Katie can force-feed her some peanut butter.

The comment immediately ricocheted round the world, with the ever subtle Daily Mail calling it an "attack." And, in a stunning display of Everything We Are Banging Our Heads Against the Wall About Here, it proved a launching pad for speculation about the appearance of both the duchess and Ms. Couric. The USA Today commenters were quick to helpfully note that "Katie's rump has expanded considerably" and that she should be "put out to pasture and make way for younger folks with better ideas" because she is "just so old."

The New York Post, meanwhile, reported that "There are whispers that Middleton's dietary habits are the reason why the Royal couple have yet to become pregnant, despite their desire to have a family," while at the Daily Beast, Tom Sykes scrutinized that "Kate is not bulimic, and indeed she had appeared to be gaining (a little) weight in the past few weeks. Of course, cameras add pounds, but in the most recent pictures although Kate's arms still seem very thin, there does seem to be a little more flesh on the bone than there was back in March."

I want you to take that statement in for a minute. I want you to understand that that, in a nutshell, is what we women are up against on a goddamn constant basis, whether we're royalty or supermodels or 12-year-old girls or the lady sitting across from you on the bus. Looking a little bloaty today? You're gaining weight. Or are you pregnant? Did you drop down a size? You are getting too skinny there, girl. Do you have an eating disorder? Either way, it's definitely everybody's business! Maybe somewhere in the realm of unicorns and universally flattering jeans there is a precise weight and proportion that a woman can attain -- and consistently maintain down to the ounce throughout her menstrual cycles and meals and workouts -- so everybody will get the hell off her back. But a) probably not without the generous help of Photoshop and b) why, why, why should she?

In her forthcoming book "Daring Greatly,"  author Brene Brown, whose TED talk on "the power of vulnerability" went viral in 2011, talks about the ways women are shamed in our culture – by attacking our mothering or our appearance, "two kill shots taken straight from the list of feminine norms." It's an unwinnable war, as Middleton's predecessor Princess Diana learned through her admitted struggles with bulimia. And it's one women face every time they step out the door with their big butts or their bony collarbones or their saggy jowls. It's a pervasive mind-set that says "you're not good enough, lady. You've got a lot of nerve showing yourself to the world in that condition. Never mind your accomplishments or your spirit, not when we can evaluate your worth by how big or small your arms are. Not when we get to have an opinion about how much you should or shouldn't be eating." Great. Like we women aren't undermined enough at every turn as it is.

Couric, whose upcoming guest list includes a postpartum Jessica Simpson and all her much-observed "pregnancy pounds," has an opportunity with her reach and her platform for her new show to be a champion for the women's issues that really matter in our daily lives. Or she can just sit around and discuss other females based on their weight. The theme of her first month is a celebration of women "reinventing themselves." Maybe later she'll get around to lauding those women who are just fine right now, just as they are.