"Keep the Lights On": A gay breakthrough, and a great movie 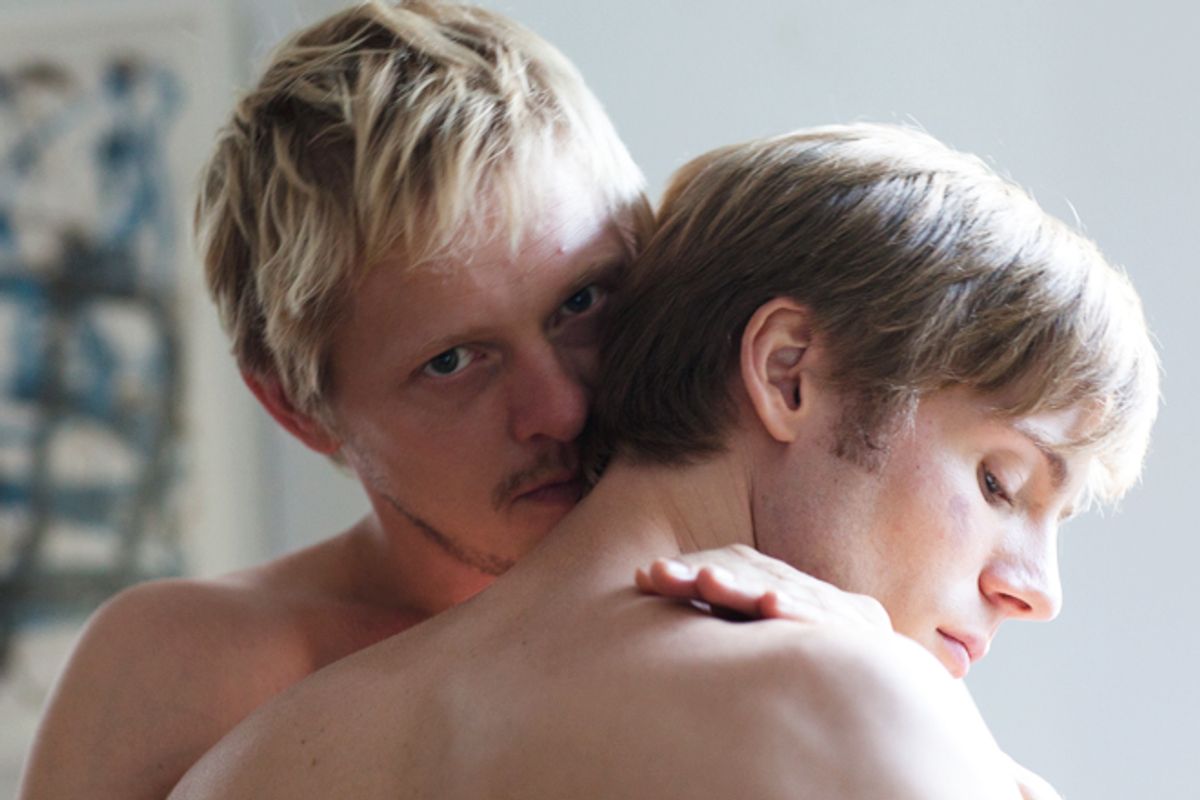 Thure Lindhardt and Zachary Booth in "Keep the Lights On"
--

When we first meet Erik (Danish actor Thure Lindhardt), the New York documentary filmmaker at the center of Ira Sachs' gripping relationship drama "Keep the Lights On," he's got his hand down his pants and is describing himself to a stranger on a phone-sex line. (It's 1998, so yes, such things still exist.) What he says is pretty accurate -- 5-foot-11, blond and handsome, "masculine" -- although we never get to confirm the "six-and-a-half inches, uncut" part. While "Keep the Lights On" is plenty explicit on the subject of gay sexuality, it’s not an NC-17 picture and has relatively little nudity.

That's quite an introduction to a character, especially considering that Erik is evidently based on Sachs himself, an indie-film stalwart best known for the 2005 Sundance prizewinner "Forty Shades of Blue" -- in which Rip Torn delivered a memorable performance as a Memphis music producer based on Sachs’ father. As the filmmaker discussed in a recent New York Times interview, while he has lived an openly gay adult life his films (including the 2008 “Married Life,” with Patricia Clarkson and Chris Cooper) have primarily concerned heterosexual relationships. There’s not necessarily any contradiction or hypocrisy to be found in that, but there’s also no doubt that “Keep the Lights On,” as its title suggests, is a work of self-revelation and even of nakedness.

Sachs has made no secret of the fact that "Keep the Lights On," the story of a tormented, 10-year relationship between two men in millennial Manhattan, is drawn from his own life. (Sachs’ real-world ex-boyfriend is Bill Clegg, a New York literary agent and author of two drug memoirs, including the recent “Ninety Days,” which appear to confirm many of the personal excesses depicted in the movie.) But the film is not an excuse to issue apologias or vent personal grudges. Rather, it's a loving but fearless portrait of gay urban life at the turn of the century, seen through the prism of one dysfunctional love affair.

This movie may serve as a marketplace test for gay-themed films in the wake of crossover hits like Lisa Cholodenko’s Oscar-nominated “The Kids Are All Right” and Andrew Haigh’s British indie smash “Weekend.” It also may measure how far the gay community has come on issues of self-representation. While it seems unlikely that bigots and homophobes would actively seek out “Keep the Lights On” (except, you know, on the sly), any who do see it could certainly cherry-pick details to support the thesis that Erik's entire cadre of humanity are degenerates.

As seen over the course of an on-and-off decade together from 1998 to 2008, Erik and his lover Paul (Zachary Booth) -- a dreamboat lawyer who is, at first, purportedly straight and has a girlfriend -- drift in and out of substance abuse, compulsive promiscuity and at least the outer margins of mental illness. Paul has a habit of disappearing for days or weeks on crack benders; on one such occasion, Erik tracks him down in a midtown Manhattan hotel room and holds Paul's hand while he has sex with a male prostitute. As I said earlier, there's no full-frontal nudity in this film, but Sachs and co-writer Mauricio Zacharias are frank about the messy realities of man-on-man sex in a way rarely or never seen on-screen in a mainstream film before.

I was a huge fan of “Forty Shades of Blue” and found myself mystified by the arch and chilly “Married Life,” while believing in both instances that Sachs would make a magnum opus that still lay ahead. Here it is: “Keep the Lights On” is a landmark work in gay cinema, in New York cinema and in American cinema. Whatever else it may be -- scathing self-portrait, old-school NYC independent film (shot on super-16 film, not digital video!), showcase for two marvelously liberated performances -- it's absolutely not a freak show. Erik and Paul are complicated, confidently realized creations, and there's plenty of human commonality to be found in their relationship, no matter what gender you are or whom you go to bed with. Sachs’ characters are specifically and recognizably gay, no doubt about it; but that’s not anywhere close to an adequate description. They’re also creative-class professionals, city dwellers of the 21st century and self-destructive, narcissistic young men of a variety who torment male and female lovers alike.

Like "Weekend," another recent film that feels like a step forward or a step away from the "queer cinema" of the '90s, this isn't a movie about identity or coming out or facing oppression. It's an unstinting relationship drama about two guys who fall in love in the most tolerant and diverse metropolis in America, surrounded by supportive gay and straight friends, and manage to screw it all up with drugs and craziness and horndoggery. I was reminded immediately of Ingmar Bergman’s “Scenes From a Marriage,” but Sachs, a hardcore cinephile, has cited all sorts of other influences, from “Goodfellas” to “Annie Hall” to the films of French cult hero Maurice Pialat.

I’ve heard it suggested that “Keep the Lights On” is a covert portrait of the costs of homophobia; in other words, that Paul and Erik wouldn’t act so crazy if our society weren’t so severely polarized around questions of sexuality in general and gay sex in particular. Maybe that’s a valid extrinsic interpretation, but there’s nothing in the film to support it. As Sachs has said, he’s trying to depict a New York society that has evaded the movies until now, in which affluent, ambitious urbanites like Paul and Erik are not defined by their sexuality (central as it is to their lives) and do not live in a “Boys in the Band”-style gay ghetto. There could be a lot of reasons why they did so many drugs and treated each other like crap, but Pat Robertson didn’t have much to do with it.

Gorgeously photographed in moody, grainy hues by cinematographer Thimios Bakatakis, “Keep the Lights On” also features songs by underground New York music legend Arthur Russell (who died of AIDS in 1992), and an internal tribute to photographer Avery Willard, who documented New York’s gay community in the mid-20th century. Tragic, challenging, uplifting and finally liberating, this is a film that will reward multiple viewings for many years to come. It fulfills the potential with which Ira Sachs has tantalized us for years – and also explains why it took him so long. Out of lost love comes a terrific work of art; it's the oldest story in the world, but it always feels new when it's done right.

“Keep the Lights On” opens this week in New York and Los Angeles. It opens Sept. 14 in San Francisco; Sept. 21 in Palm Springs, Calif., Philadelphia and Washington; Sept. 30 in Dayton, Ohio; Oct. 5 in Columbus, Ohio; Oct. 12 in Boston, San Diego and Toronto; and Oct. 26 in Atlanta, Chicago, Denver and Minneapolis, with more cities to follow.

Ira Sachs Keep The Lights On Lgbt Movies Our Picks Our Picks: Movies