The singer takes it all off for cancer awareness, and shows the healing power of solidarity 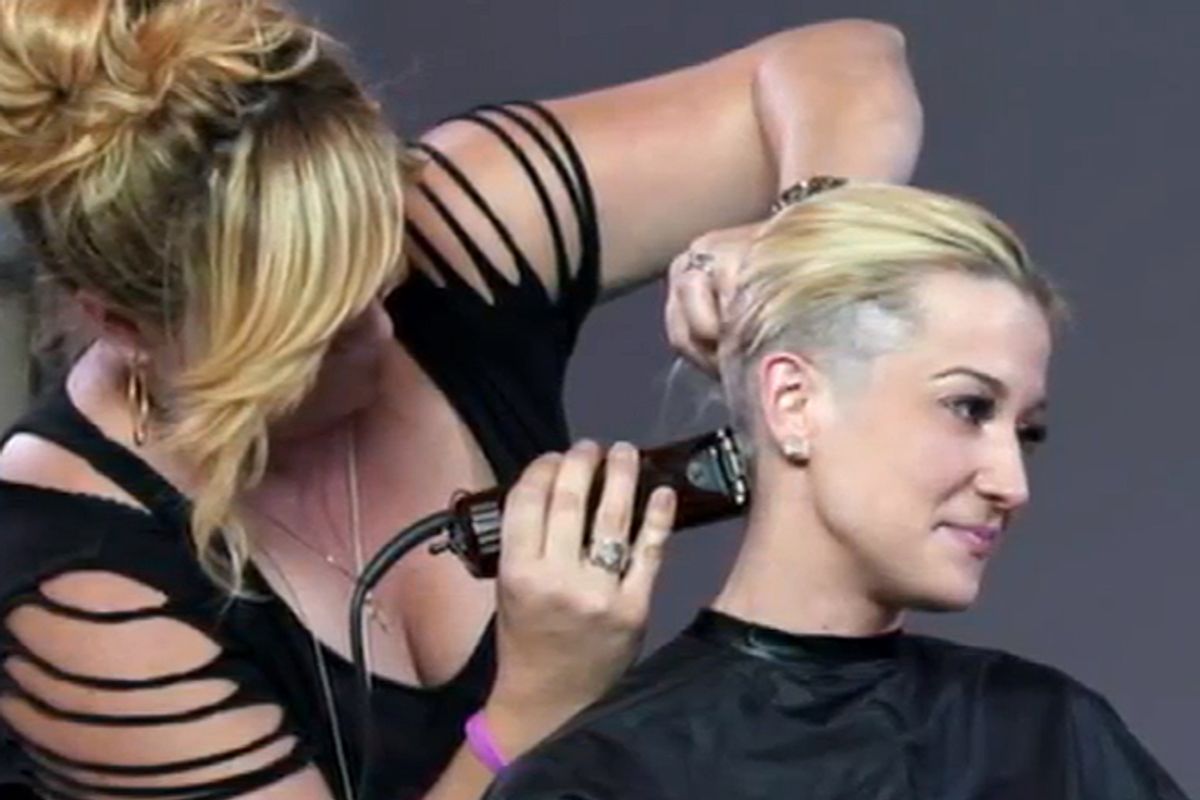 Finally – a celebrity shaves her head for a good reason. Country star and former "American Idol" contender Kellie Pickler radically updated her look this week with a bold, bald pate, and she didn't do it alone -- she did it  with her best friend Summer Miller. After tweeting earlier that "It's been a great life-changing day," Pickler revealed a video of her and her friend's long tresses disappearing in an act of solidarity -- and awareness-raising about breast cancer.

In June, as Miller writes on her CaringBridge blog, the 35-year-old mother of two was diagnosed with cancer after discovering a suspicious lump. She underwent a double mastectomy soon after and as of August, has been declared cancer-free. But as she embarks on the next stage of recovery, Miller is set to begin chemotherapy – and face the unpleasant side effects.

The idea of a friend or family member going along on a loved one's chemo chrome-dome ride is not unusual. Two years ago, for Livestrong Day, 35 Austin residents got their heads shaved in honor of young-adult cancer survivors. Sons have done it to support their dads. Daughters have done it for their moms. Pathologists at the Mayo Clinic have done it to express empathy – and fundraise – for patients. The St. Baldrick's childhood cancer organization specifically challenges people to shave their heads to raise money for their cause. In 2010, over 50 members of the Bakersfield, Calif., community shaved their heads in a mass event for the charity. There must be a compelling reason for people do this, aside from the allure of a break from bad hair days.

Pickler and Miller -- who has a family history of breast cancer – have a stated motive for their very public action. They say that they hope this will encourage other young women at risk, like Miller, to get screened. Says Miller, "If this compels even one person to change their mentality toward waiting until the age of 40 for their mammogram, then it will be worth it." And Pickler added, "Cancer does not discriminate."

Yet of all the ways that you could raise money or awareness for the cause of fighting cancer, why go bald? It doesn't cure anything; it doesn't even mimic the real and sickening effects of chemo. Pickler can joke on Twitter about being G.I. Jane for Halloween, but she didn't have to lose her hair -- and she can grow it out starting right now.

But dramatic life events often call for dramatic responses. And take it from me, cancer will recalibrate your drama meter. The experience of it can be harrowingly lonely -- fraught with a kind of pain and fear that can make the patient feel like she's living on an entirely different planet from the people in her life. For those watching on the sidelines, meanwhile, it can be equally disconnecting. There is nothing quite like the helplessness of watching someone you love at the mercy of a vicious disease -- and a treatment that can be its own special hell.

Even in the moments when you feel like we can't do anything, you still grope through the darkness to do something. You do it even more in those moments. You reach out. You say that even though you can't know what it's like to stand in each other's shoes, you can share some of the journey together. You can find a measure of control in an often out of control situation. It doesn't change anybody's white cell count or bring back the body parts lost to disease. But as Ellen DeGeneres tweeted soon after Pickler's tender act of bonding with her friend, the singer "never looked more beautiful." Because any gesture made with love is a grand one. Especially when two friends put their heads together.