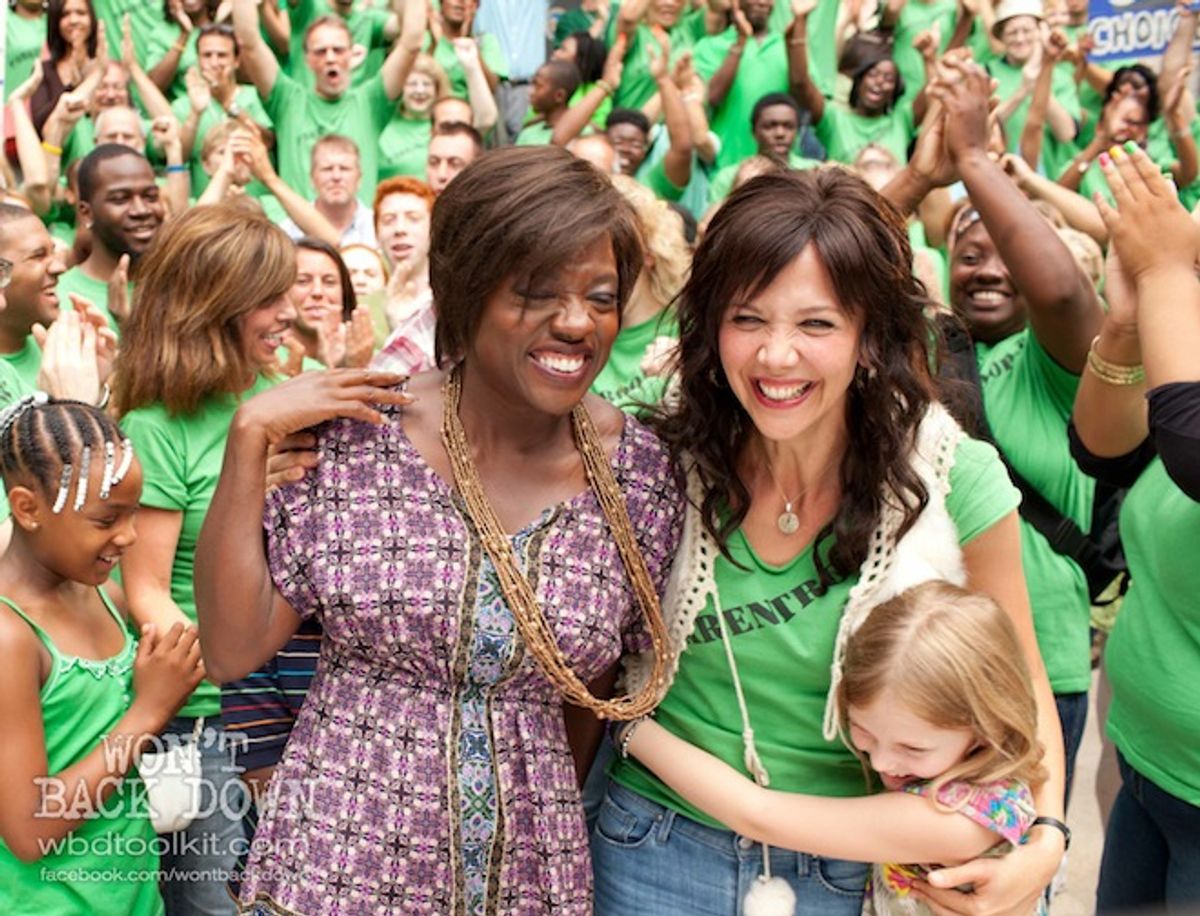 At last week’s GOP convention, Chris Christie served up some juicy red meat: “They believe in teacher’s unions. We believe in teachers.” Of course, if Republicans “believe in” teachers, they have a strange way of showing it: slashing their jobs while trampling their bargaining rights. But as for Democrats’ supposed faith in teachers’ unions, this week showed once again that the party could more fairly be described as agnostic at best.

The week’s first slight to teachers’ unions came Monday, before the convention had even kicked off. Convention Chairman Antonio Villaraigosa spoke at a special screening of the upcoming Hollywood film “Won’t Back Down” for DNC delegates. He was joined by fellow Democratic mayors Cory Booker and Kevin Johnson, top union antagonist Michelle Rhee, and the director of Parent Revolution, a group pushing for “parent trigger.” The film is a sympathetic fictional portrayal of “trigger,” a policy which creates a mechanism for replacing union public schools with non-union charters, based on signatures from parents. American Federation of Teachers President Randi Weingarten recently wrote that the film has “egregiously misleading scenes” which depict a union preventing teachers from working past 3 PM and protecting a teacher who punishes kids by putting them in the closet.

As I’ve previously reported, “parent trigger” has widespread support from Democratic mayors, none more vocal or prominent than Los Angeles’ Villaraigosa. While the screening was not listed as an official convention event, the Huffington Post’s Jon Ward reported that the Obama Administration was asked for permission to hold the event in Charlotte, and deferred the decision to the DNC’s political director, “who raised no objections.”

The day after the “Won’t Back Down” event, Democrats ratified their new platform, which pledges to “fight for collective bargaining rights,” including teachers’, but also to “work to expand public school options for low-income youth,” including charter schools. Charter schools are far less likely to be unionized than other public schools.

In his Tuesday night speech, Massachusetts Governor Deval Patrick described one of the transformations incentivized by Obama’s signature “Race to the Top” initiative, touting how Boston’s Orchard Gardens Elementary school “is turning itself around,” with changes including higher “teacher standards and accountabilities.” But the website of the Boston Teachers Union also highlights Orchard Gardens as an example – “of how blame has unfairly been laid on the steps of union teachers…” The BTU (an AFT affiliate) says that despite a “failure of leadership” that included six different principals over seven years, the reforms imposed there included ejecting the majority of the staff, including some who had never been evaluated. The BTU website also charges that the superintendent’s key “turnaround” proposals, most of which went into effect, featured “very little that resembles education innovation and a lot that looks like cost cutting and attempts to limit teachers’ voices in these schools.”

Asked about these criticisms, Boston Schools Superintendent Carol Johnson named greater integration of arts and engagement of parents as new innovations, and defended the removal of the majority of the school’s former teachers: “Principals, if they’re going to be responsible for the test scores, they have to be able to choose their starting line-up.” It’s easy to imagine why Governor Patrick didn’t make that argument directly in the convention hall.

Convention speakers repeatedly praised Race to the Top for instigating reform plans in 46 states. But at the 2010 convention of the National Education Association, delegates narrowly passed a resolution that (without naming Obama) declared “no confidence” in the program. The 3 million member NEA is the nation’s largest teachers’ union. Its president, Dennis Van Roekel, wrote last year that Race to the Top’s “competitive nature” has “pitted students against their peers, and educators against their colleagues.”

Still, Van Roekel defended Obama and the convention. Asked about “Won’t Back Down” and Villaraigosa, he said that while he opposes “trigger,” he “enjoyed the movie,” and admired some of Villaraigosa’s advocacy on education. Asked about the platform’s support for charters, Van Roekel noted that research suggests “only about 17 percent” of charters “are doing a better job than public schools.” But he added that Education Secretary Arne Duncan “doesn’t consider charter schools the answer.”

Van Roekel said that NEA “did not agree with all of [Obama’s] policies, and I’ll fight with him on the best ways to achieve the vision we both agree to.” But he called the president’s education record “excellent,” citing his support for pre-Kindergarten, averting teacher layoffs through the stimulus, reforming student loans and increasing Pell Grants – policies he warned Romney would reverse. He also touted a Department of Education report on the need for better teacher training programs. He expressed confidence that, in a second Obama term, the president and the union would find common ground on reauthorization of the Secondary Education Act.

In his speech last night, while celebrating that most states "answered our call to raise their standards for teaching and learning," the president pledged to make it possible for two million workers to learn job skills in community college, and over the next decade, to recruit 100,000 new teachers and halve the growth of tuition costs.

Not all NEA members agree with their president, however. Kati Walsh, a Wisconsin art teacher and union activist, agreed that given the candidates’ overall platforms, teachers “don’t have a choice but to vote for Obama,” but added “his policies are going to be destroying public education.” Walsh said that the two parties are “not on the same page about much. But they’re on the same page when it comes to education, which is terrifying.”

Three months ago, after Romney accused Obama of being in thrall to teachers unions, Obama for America Deputy Campaign Manager Stephanie Cutter tweeted, “FACT CHECK: Romney off on Obama’s relationship with teachers’ unions; it’s anything but cozy.” The words were taken verbatim from the title of an AP article, which she linked in the tweet. But the sense that the campaign was bragging about its distance from the unions drew chagrin from some in labor. From the platform, to the speeches, to the chairman moonlighting on an anti-union panel, this week was full of reminders of how far from cozy the two are.