Standing up to Rahm

Bullied by their city's Democratic mayor, teachers in Chicago are making a bold stand against misguided "reform" 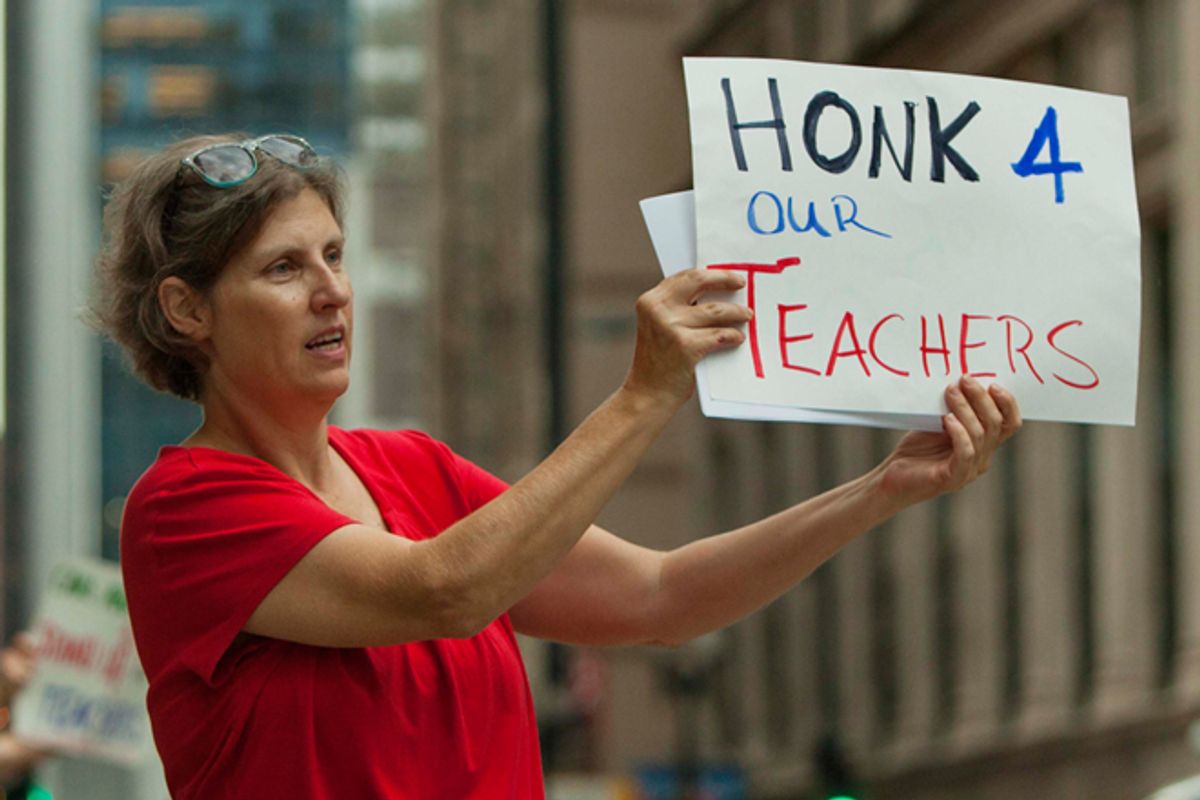 When I was a kid, teachers were like gods. In eighth grade, my school had a day where students got to take over and make lesson plans, teach a class or two, try and get our fellow students to pay attention. After being selected to teach English, I still remember the thrill of going in the teachers' lounge for lunch — a place that usually only the most special people got to go.

Those special people called teachers didn’t get paid very well, particularly when you factored in the long hours grading papers and prepping, but they got our gratitude. And that, plus a decent pension, was enough.

When I was a kid, having a good teacher was the key ingredient to getting a good education, just as it is now. And when I was a kid my teachers were unionized, just as they are now. But now the same teachers who want the same decent wages and working conditions and the same promise of a reasonably secure retirement are accused of being the problem in our schools today. Special interests who want to push standardized testing and privatize our nation’s public schools are demonizing the teachers who oppose these measures.

In Chicago, where teachers are already one of the city’s lowest-paid professions, the city public school system wants to lengthen the school day by 20 percent. In exchange, the district at one point agreed to a mere 4 percent raise for teachers, but Mayor Rahm Emanuel canceled that agreement and is now only offering a 2 percent raise.

The Chicago teachers also object to their performance and jobs being tied to standardized tests. In March, education researchers from 16 universities sent a letter to Emanuel and the head of the Chicago Public Schools warning against such measures, pointing out among other things that such test-based teacher evaluations have been shown to be highly unreliable measures of teacher quality. Moreover, standardized test results are often influenced by poverty, homelessness, crime and other social issues beyond the influence of teachers. And we know this type of teacher evaluation risks creating teachers who “teach to the test” instead of the creative, dynamic teachers we need.

Prior to going on strike for the first time in 25 years, the Chicago Teachers Union won “concessions” including that the school board would provide textbooks on the first day of school. Teachers have previously had to wait up to six weeks into the school year for instructional materials to arrive. And the union wants to limit class sizes, which are the largest in the entire state of Illinois. These aren’t the demands of greedy thugs. These are the demands of teachers who want to teach.

But rather than negotiate a good faith compromise with the union, Emanuel tried to go around the union until the state labor relations board stopped him.

Meanwhile, under the guise of “reform,” Emanuel wants to vastly expand charter schools in Chicago to eventually encompass half of the city’s education system. This amid evidence that charter school siphon taxpayer money and strong students out of public schools and leave poor students and students with disabilities worse off. But Rahm Emanuel actually hired protesters to make his proposals look good while demonizing teachers. But parents are standing with the teachers and their union.

Of course, school “reformers” argue that they aren’t opposed to teachers, just their unions. But the new film “Won’t Back Down,” which is heavily backed by anti-union activist Michelle Rhee, portrays teachers as lazy and unions as obstructionist. As American Federation of Teachers president Randi Weingarten wrote in her critique of the film, “America’s teachers are already being asked to do more with less — budgets have been slashed, 300,000 teachers have been laid off since the start of the recession, class sizes have spiked, and more and more children are falling into poverty. And teachers are being demonized, marginalized and shamed by politicians and elites who want to undermine and dismiss their reform efforts.”

Notice that no one is pushing charter schools in wealthy communities because public schools there are thriving. In other words, the school district I grew up in is still a good school district — not because of unions or vouchers or high-stakes testing but because of taxes.

But in poor neighborhoods and inner cities across the United States, students are struggling because their communities are struggling — conditions only made worse by the recent recession. The teachers and teachers’ unions who work in these districts to try to help are part of the solution. Poverty, homelessness and the dramatic funding cuts to social services that help needy families, as well as the cuts to public education, are the problem. And we can’t expect teachers to do more and more when conservative austerity measures are giving poor kids and their schools less and less.

Teachers are advocates for their students. Teachers’ unions are advocates for teachers. And teachers know what makes schools work, but those who oppose teachers’ unions are plainly trying to undermine what has worked for generations in our education system and are using teachers as a scapegoat to do it.  The teachers on strike in Chicago are fighting for their students to get a quality education. I know my teachers would have been fighting, too, and I would have been right there with them, with admiration and gratitude.