In defense of "Bachelorette's" mean girls

They're not as horrid as they first seem 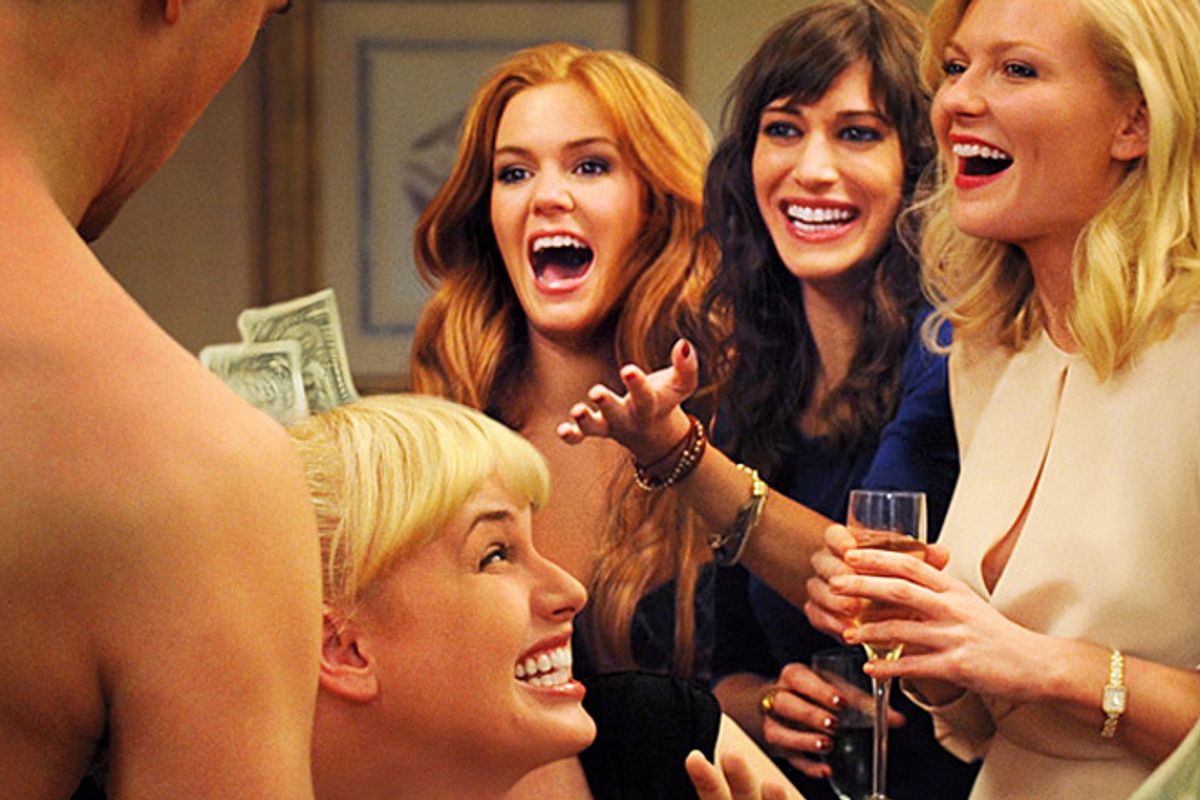 Before I saw “Bachelorette,” the relatively new comedy starring Kirsten Dunst, Lizzy Caplan and Isla Fisher as three coke-snorting, shit-talking, emotionally damaged bridesmaids, now showing in theaters and On Demand, I was expecting a movie about three women from hell. The reviews of the film not only positioned the stars as the “Bridesmaids” chicks gone rabid, but as emotional relatives of Charlize Theron in Diablo Cody’s “Young Adult” and Cameron Diaz in “Bad Teacher," characters who were intentionally heinous, detestable and unredeemed. Whether one liked "Bachelorette," or loathed "Bachelorette," found it hilarious, disgusting or somewhere in between, the three women in it were supposed to be capital B bitches. Imagine my surprise when I just flat-out liked them.

Expectations played a part: I was expecting the worst women in the world, and the chicks just turned out to be pretty effed in the head. Regan (Dunst), Gena (Caplan) and Katie (Fisher) are mean. They are petty and lost, reflexively cruel and drug addled. They are wretched and condescending to Becky, the soon-to-be-married high school friend they still insist on calling “Pig Face.” They have a horrible attitude about her wedding, a poisonous mixture of “how could it happen to her when we’re all so much prettier?” condescension and jealousy. Where Gena and Katie are, respectively, defensive and ditzy, Regan is a stone-cold horror show, belittling and merciless to most everyone she knows and absolutely everyone she does not. Upon spotting her, members of the service industry would be wise to run the other way

And yet after the trio's way harsh introductions — a crash course in Regan’s misery and spite, Gena and Katie’s sloppiness and self-destruction, and the action-instigating moment when Katie and Regan rip Becky’s dress by both climbing in — their characterizations soften. All three women desperately want to fix Becky's dress. They are mean and nasty, but they are not that mean and nasty. They care. Thus begins one long crazy night in which they try to reverse the damage they have done to the dress and — in the grand tradition of long crazy night movies — themselves. We learn that they’ve all got their own complicated, depressing back stories — bulimia, heartbreak, addiction, suicide —  and, moreover, that in their twisted ways, they really do love each other. They may be bitches, but they are also friends.

Toward the end of the film, Regan, a longtime bulimic, shoves her fingers down an OD’d Katie’s throat, getting her to vomit up the bottle full of Xanax she swallowed. Joe, the nice guy who observes all this go down, tells Gena that Regan saved Katie’s life: “She’s a head case …” he begins, before Gena finishes, “But she’s a good friend.” And she is. Regan is a Type-A mercenary, a quality that makes her frightening, but also makes her effective. She’s the friend Gena called back in high school when her boyfriend didn’t show up to drive her to an abortion. She’s the girl Becky wanted as her head bridesmaid even though Becky knew Regan wasn't happy for her. When Regan excoriates a poor guy for not bringing Becky the right flowers the morning of the big day, she's both a total beast and a good friend: The flower guy shivers, but Becky cheers.

Moreover, Regan is self-aware. She knows she can be awful and is basically waiting for people to call her on it. She isn't always honest, but appreciates it nonetheless. When a cad she ends up sleeping with remarks on her belittling ways, she doesn't deny it, she gets turned on. When Becky tells her that she knows Regan isn't really happy for her, she looks a little ashamed but agrees, as she mentally recommits to making sure the wedding comes off. When Regan shoves her finger down Katie's throat, explaining to Joe she's had a lot of practice, Joe asks why she would ever do that to herself. "I wanted to be beautiful," she matter-of-factly replies, refusing to hide behind anything more manipulative, heart-pulling or socially acceptable.

Meanwhile, over the course of the movie Katie, who has a serious drinking and drug problem, reveals herself to be a simpleton party girl, one who does tons of coke to mask her own sadness, and is perpetually being buoyed along by other people's stronger wills. The person she harms most is herself. Gena, in the movie's purest rom-com story line, turns out to be pretty raunchy, but otherwise a really likable chick who is just hung up on the high school boyfriend who is the only guy she has ever loved. (They get a happy ending.)

Before the insanity begins, the three women have a big group hug on a sofa as Regan says, truthfully, "I'm so happy you're here." When it's all over, when they have delivered the dress to the bride and given her a pep talk and are sitting in various stages of disarray— vomited on, in last night's clothes, recently revived by EMTs — Regan looks over at the wedding and remarks that it came together perfectly. Maybe not perfectly, but close enough. Regan, Gena and Katie may not be nice girls, but they're close enough.