First Wisconsin. Then Occupy. Now Chicago. The teachers' strike is the next chapter in the fight against plutocracy 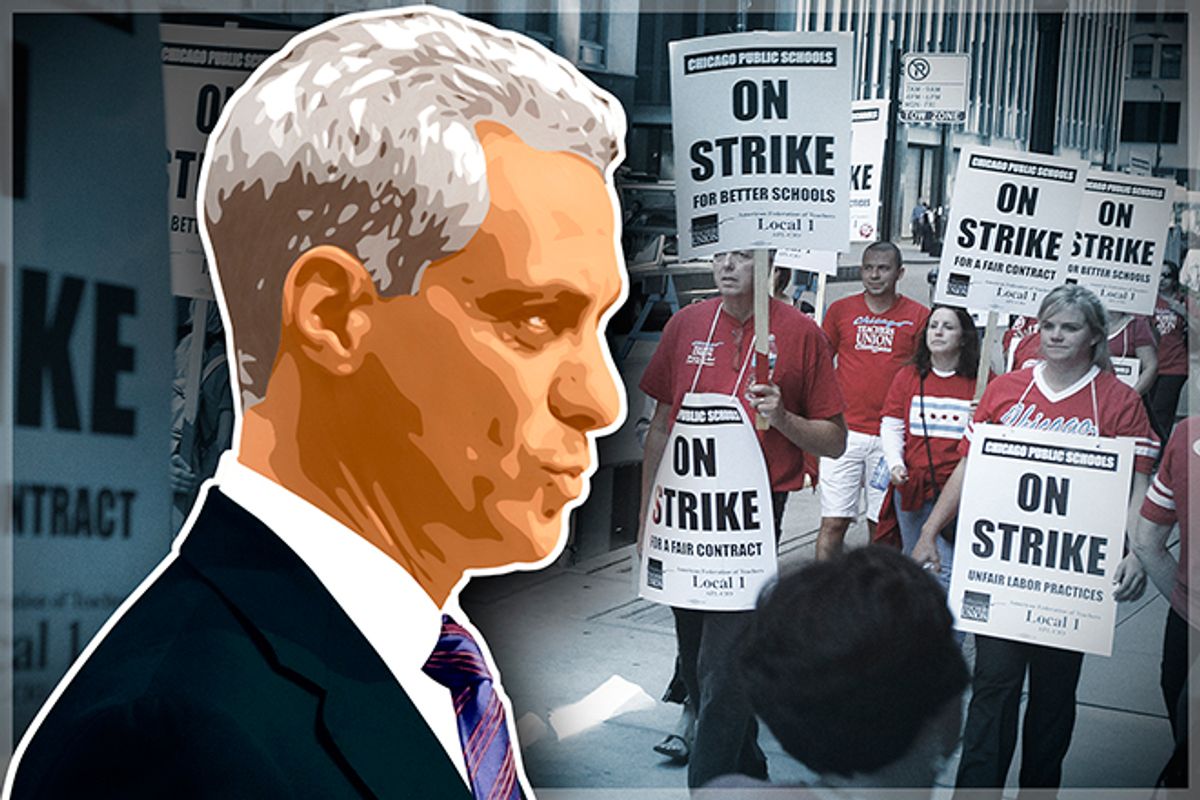 CHICAGO — I was awoken by honking car horns yesterday morning, and couldn't have been happier for the fact. Chicago's public schoolteachers are on strike against the city government and Mayor Rahm Emanuel. And while no one likes the budget crisis that forms the strike's fiscal context, nor the fact that 350,000 students aren't at school, much of Chicago is finding joy in the municipal impasse — which is why, anywhere within earshot of the schools where the Chicago Teachers Union's 25,500 members are picketing in front of their workplaces, solidarity car horns are blasting away.

Since Rahm Emanuel's election in the spring of 2011, Chicago's teachers have been asked to eat shit by a mayor obsessed with displaying to the universe his "toughness" — toughness with the working-class people that make the city tick; toughness with the protesters standing up to say "no"; but never, ever toughness with the vested interests, including anti-union charter school advocates, who poured $12 million into his coffers to elect him mayor (his closet competitor raised $2.5 million). The roots of the strike began when Emanuel announced his signature education initiative: extending Chicago's school day. Overwhelmingly, Chicago's teachers support lengthening the day, which is the shortest of any major district in the country. Just not the way Rahm wanted to ram it down their throats: 20 percent more work; 2 percent more pay.

He had already canceled a previously negotiated 4 percent cost-of-living raise, and accused teachers who balked of not caring about their students. The teachers' response to this abuse is something all of us should be paying attention to. If Chapter 1 of the American people's modern grass-roots fight against the plutocracy was the demonstrations at the Wisconsin State Capitol in the spring of 2011, and Chapter 2 was the Occupy encampments of that summer, the Chicago Teachers Union's stand against Emanuel should go down as Chapter 3. It's been inspiration to anyone frustrated that people have forgotten how good it feels to stand up to bullies — and how effective it can be.

The CTU lost the first skirmish last year when Emanuel trundled down to the state capitol in Springfield to wire a new statute sure to forestall accountability for his draconian plan: alone among Illinois municipal workers, teachers would need a 75 percent vote among their membership to authorize a strike. Then in June of this year, after a rally that overflowed a 3,929-capacity theater with red CTU T-shirts, almost 90 percent of members voted through that authorization, should their leaders choose to call a strike. Counting spoiled ballots, the number of teachers voting against the authorization amounted to little more than a handful.

Teachers trust their leadership. They don't trust the mayor — who the union's feisty president, Karen Lewis, claims told her at a social outing at the ballet shortly after his election "that 25 percent of the students in this city are never going to be anything, never going to amount to anything and he was never going to throw money at them." The exchange points to a key hinge in the story: Who in the dispute, the teachers' union or the mayor, most earnestly has the interests of "the children" at heart?

The CTU stumbled in negotiations out of the gate, asking for a 30 percent raise that made them look just like the mercenary self-seekers right-wing critics always claim municipal unions are: a cash-extorting cartel against the taxpaying public. But Lewis later dialed that down to 19 percent. And Rahm has never had Chicago citizens with him on the issue — he's just arrogantly acted as if he had. In one poll this spring 40 percent of Chicago Public School parents said they "side the most" with the teachers, only 17 percent with the mayor. Black voters who gave Emanuel a majority of their votes over Carol Moseley Braun, the first African-American senator since reconstruction, are especially alienated by his treatment of the teachers — a backbone of the black professional class.

Chicagoans came to trust the union further after system president Jean-Claude Brizard expressed frustration that the authorization vote came before an arbitrator's fact-finding report came down — but which, when it did, largely aligned with the union's positions. Meanwhile the public has mostly come to believe the broader story they're telling: that this struggle is ultimately about improving kids' learning experience (including preserving arts and physical education, keeping class size in check and enhancing services in the classroom), and that treating teachers fairly only helps kids in the end. The union also makes the morally compelling argument that yoking the survival of struggling schools to their test scores disrupts the education of the most vulnerable students — though they're also able to make the utilitarian argument that those scores have been rising.

So for now, the momentum rests with them. A Labor Day rally in Daley Plaza in front of the soaring black Mies van der Rohe civic center was probably the most impressive political demonstration in that marquee Chicago public space since 2010's massive immigration march (that one had city support). It concluded with an unpermitted street action, as thousands poured into Washington Street to symbolically shout up at Rahm Emanuel's fifth floor City Hall office. The unplanned outburst of exuberance trapped several unwitting civilians' cars inside the scrum. Cops — cheerful cops, surely thrilled at the solidarity they would likely enjoy when their contracts came up for renegotiation — parted the crowd to let them through. One motorist I saw began leaning heavily on the horn. But not from frustration. Her other hand formed a fist and shot into the air. She was beaming, apparently thrilled to be caught inside history.

Chicago public schoolteachers don't have a strike fund; the lost wages come straight out of their household budgets. One kindergarten teacher of my acquaintance took to Facebook to ask for bean recipes. So though this may change if the strike turns lengthy and disruptive, Chicago isn't seeing its teachers as greedy. They're seeing them as a vanguard in the struggle against what might happen to the rest of the middle class next if they don't speak up.