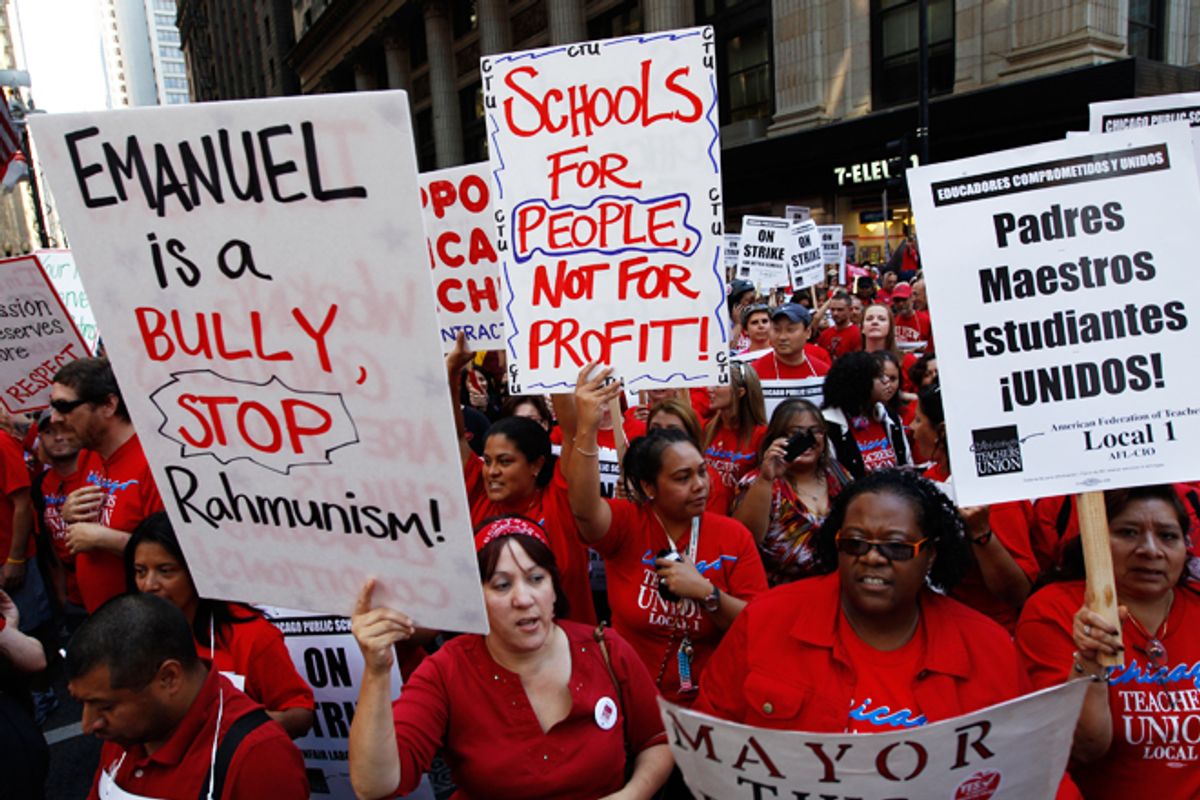 As if on a precisely calibrated timetable, Dean Singleton's Denver Post today published an overwrought screed cheering Chicago Mayor Rahm Emanuel's anti-union efforts on, and urging him to pulverize his city's teachers union in order to send a nationwide message that the education concerns of teachers will no longer be tolerated in the schoolhouse. Singleton, as I documented in my recent Harper's magazine expose, had long used his media empire to denigrate organized labor, so it is no surprise that he's using the crown jewel of his vast MediaNews empire to try to nationalize a municipal dispute between educators and an investment-banker-turned-mayor. If every crisis is an opportunity, this is Singleton's chance to help crush the teachers union in specific and the labor movement in general.

Whether you live in Denver or not, the screed in Singleton's broadsheet is an important read because it is a succinct primer echoing almost every distortion, omission and skewed assumption that now dominates the larger media narrative about both the Chicago teachers strike and the larger assault on organized labor. Because that narrative is now so skewed, it's easy to feel confused about what's really going on in Chicago -- and what the Chicago strike means. That's, of course, by design. Anti-union ideologues don't want anyone asking any questions of their cause.

But when it comes to the complexities of education policy and labor politics, those questions must be asked. Here are four of the most pressing of those queries -- two political, two policy-based -- to consider when pondering the Windy City showdown.

Why would anyone believe Rahm Emanuel cares about kids, but teachers do not?

One of the two hallmarks of Chicago Mayor Rahm Emanuel's political career has been his affinity for undermining the cause of organized labor. He was a driving force behind Clinton era free-trade deals that decimated the union movement. His official position on the auto bailout was "Fuck the UAW." He has aggressively pushed to privatize municipal services, undermining public employee unions. And, as the Chicago Sun-Times reports, he "took the Chicago Teachers Union on as an adversary rather than attempt to make them a partner," denigrating educators as anti-children, and successfully lobbying for legislation to undermine them.

The other defining characteristic of Emanuel's political career is his worship of Huge Money. As a congressman, he led the corporate fundraising efforts for House Democrats. After leaving Washington, the Chicago Tribune reports that he "made more than $16 million in just 2 1/2 years" as an investment banker in "a tale of money and power, of leverage and connections, of a stunningly successful conversion of moxie and a network of political contacts into cold, hard cash." As candidate for Chicago mayor, he unsurprisingly ran as the anti-union corporate candidate -- and, according to Chicago historian Rick Perlstein, received $12 million from anti-union charter school advocates, who have money signs in their eyes when it comes to education policy.

In light of this deep record, it's shocking that anyone might believe Emanuel's effort to crush the Chicago Teachers Union is anything other than just another step along the same anti-union, pro-corporate path that has marked his career. Just think about what the basis of his "reforms" are: As the Associated Press reports, his central initiatives are about "expanding charter schools, getting private companies involved with failing schools and linking teacher evaluations to student test scores." To someone with Emanuel's record, non-union charter schools are seen as a blunt-force instrument to crush the union, private education companies are seen as potential major campaign contributors as are the huge multibillion-dollar testing companies that will win big with more standardized tests.

To look at that and then somehow believe Emanuel cares as much -- or even more -- about poor kids than teachers do is to ignore the very career Emanuel has forged.

Where is Barack Obama?

In 2007, Barack Obama told workers that if elected president, no matter where they were, he would walk the picket line with them if their collective bargaining rights were under attack. A mere five years later, the same Barack Obama won't even issue an affirmative press release of support for a union facing such an attack in his own hometown.

Why? The answer likely involves money and media.

Money-wise, Wall Street has been a huge proponent of anti-union education "reforms," seeing both potential profits in privatizing public education and a political upside in further harming a labor movement that has been a big financial-industry critic. Obama raises a huge amount of money from Wall Street and probably doesn't want to antagonize that fundraising base.

Additionally, in the spirit of the aphorism about never arguing with a man who buys ink by the barrel, Obama probably doesn't want to antagonize Citizen Kanes like Singleton and other media moguls who have been so ideologically committed to crushing teachers unions. In the crucial presidential swing state of Colorado, for example, Obama likely remembers that Singleton ran a hysterical front-page editorial lambasting Democratic Gov. Bill Ritter for merely allowing public employees to collectively bargain in any way. He probably therefore posits that any statement of support for Chicago teachers might result in a similar editorial against him -- which could easily swing a close election in a crucial swing state he desperately needs to win the 2012 election.

Hence, the disturbing sound of silence from the White House.

Why does anyone believe standardized tests of students can effectively evaluate teachers?

The major dispute between educators and Chicago Mayor Rahm Emanuel is over how to effectively evaluate teachers, for the purpose of firing them. Emanuel proposes to make standardized testing 40 percent of an evaluation. Teachers say that's too much, because standardized tests both do not measure students' critical thinking skills, and cannot account for out-of-classroom factors that undermine student achievement.

The only way to know who is right is to look at the empirical data -- and when you do that, you see that the anti-union side is treading in meaningless buzzwords like "tough," "accountability" and "results," while teachers have actual facts on their side.

On the question of whether standardized tests really measure student achievement, we can compare the alleged success of such "accountability" with college remediation rates. If a brutal regimen of standardized-testing-based teacher evaluations really measured student achievement and teacher effectiveness, then it would stand to reason that those districts that have implemented those tests most aggressively would see lower rates of kids needing remediation classes when they get to college. But in many cases, it's the opposite.

In Colorado, for instance, where most of the political and media establishment have cheered on a similar standardized testing regime as proposed in Chicago, college remediation rates have been skyrocketing. Similarly, in New York City and Florida, the Washington Post reported that standardized testing regimes have done almost nothing to improve college remediation rates.

On the question of in-school and out-of-school factors, the only people who claim the former is more important than the latter in student achievement are professional politicians and the for-profit education corporations who lavish them with campaign contributions. But in the world of social science -- aka the world of facts -- there's no longer a debate. As Joann Barkan documented in Dissent magazine last year:

Of course, those like Emanuel and his financial backers looking to destroy teachers unions would have you believe that we can either implement a standardized-testing-based evaluation system, or never evaluate the efficacy of teachers at all. This myth is propagated because it makes teachers look like they do not want their work judged. But as Barkan notes, it is indeed a myth -- after all, a number of major school districts have already implemented “Peer Assistance and Review” programs to great success. But you don't hear about that because there's no money to be made in that.

Yes, it's definitely true -- pretending that students' standardized test results can effectively evaluate teachers is a great financial boon to the politically connected educational testing industry. But the teachers union is correct: It is not a way to figure out which teachers are successful and which are not.

Why does anyone believe that charter schools are inherently better than traditional public schools?

Charter schools are a central issue in Chicago, where Emanuel wants to expand that non-union model in the name of education achievement. This is largely portrayed in the media as a bold stand for children. However, the real news here is that it highlights one of the strangest oxymorons embedded in the anti-union education "reform" movement: the simultaneous demand for "accountability" and better results, coupled with an endorsement of an education model that often produces worse results than the existing system.

Here's an excerpt from a newspaper column I wrote a few months back showing what we know about charter schools versus their traditional public-school counterparts:

This is exactly why the Washington Post's education columnist was right to note that "the central problem with the reforms that Emanuel has been advocating (are that) there’s no real proof that they systemically work, and in some cases, there is strong evidence that they may be harmful."