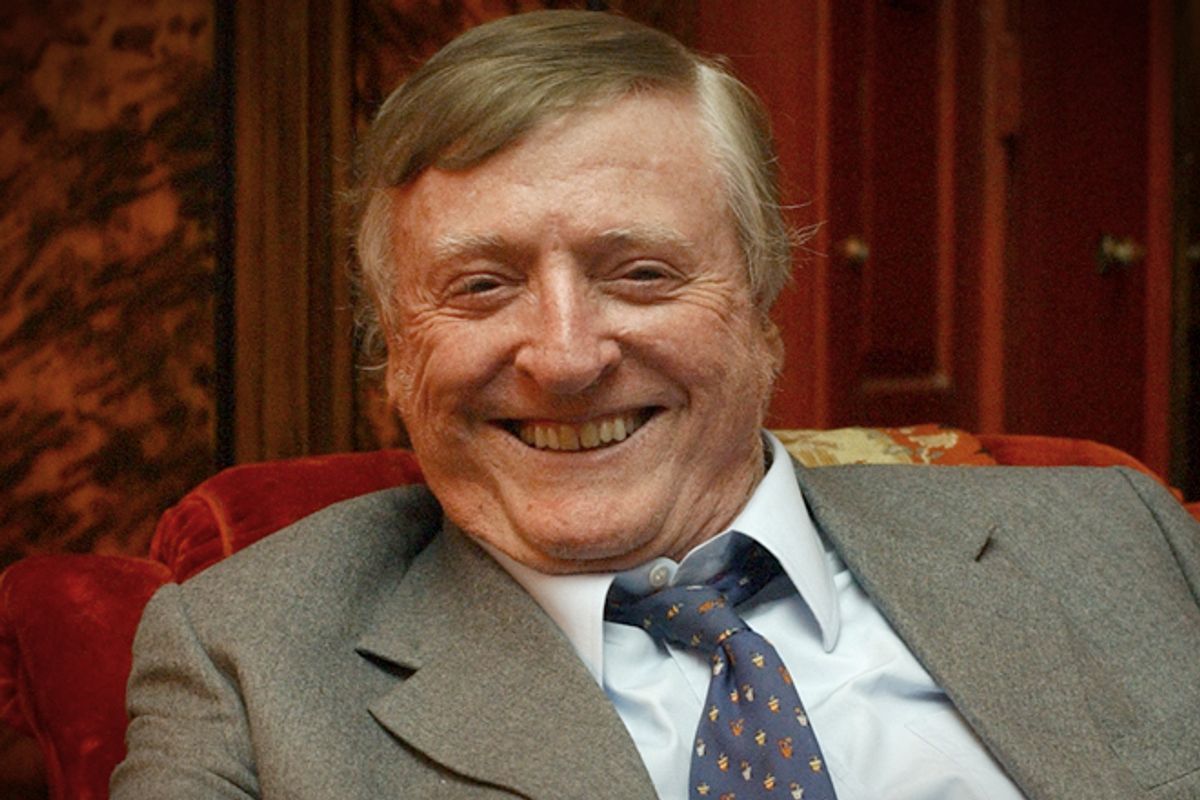 This week in The Weekly Standard the essayist Joseph Epstein asks what has become a sadly common question:  “Who killed the liberal arts?” As a perennially overeager student, I can’t help but be delighted when I know the answer to a question, even if it is posed rhetorically. From my days as my high school's valedictorian through the completion of a Ph.D. thesis on contemporary productions of Greek tragedy in Latin America, I’ve always gotten a thrill from knowing the right answer. So here it is: The conservative movement killed the liberal arts -- Ronald Reagan, Rupert Murdoch, William F. Buckley and their latter-day heirs.

They have done so through a combination of decreasing access to education and demonizing academic culture and academics. Make no mistake about it: The death of the humanities is an ideologically motivated murder, more like a massacre. The decline of student enrollment in university and college liberal arts programs is a well-documented phenomenon. These declining student numbers, along with the receding place of the humanities in the general secondary and post-secondary curriculum, does seem to spell doom for the liberal arts.

Nearly everyone, regardless of their politics, agrees that the decline of the liberal arts is at least in part a matter of economics. The rising cost of college education has made a liberal arts education simply out of reach for students from working-class and lower-middle-class families. These students are compelled to pursue vocationally oriented educations out of necessity.

Epstein notes economics in his article, but fails to cite the reasons for the rising cost of a university education. Instead he focuses on an alleged decline in the rigor and content of a liberal arts education, harrumphing that much less is expected from students who receive much more attention and support than their predecessors. More interestingly, he blames the decline of standards in the humanities on teaching and research that is increasingly concerned with theoretical analysis and multicultural topics. (More on that later.)

The economic situation is particularly dire for public colleges and universities, where the rising cost of tuition is directly related to a decrease in government funding. One of the earliest and most famous examples of this occurred when, as governor, Ronald Regan introduced tuition fees to California’s public universities in the 1970s. Today right-wing efforts to destroy funding for higher education, both in terms of subsidizing institutions and assisting students, continue with increasing virulence. Paul Ryan’s budget seeks to cut $200 billion dollars from the Pell Grant program, an essential tool for low-income students seeking higher education. The humanities disproportionately experience the adverse effects of this economic pressure. Students are unlikely to take on large amounts of debt for a degree without a clear vocational focus, and university administrators are quick to cut programs that do not carry their weight.

This financial war on higher education has been coupled with persistent attacks on the academy and academics as immoral, unpatriotic or simply frivolous. While scientists warning of climate change have recently been targeted, for the most part these attacks have been directed at those working in the humanities. William F. Buckley pioneered these attacks in his 1951 book “God and Man at Yale,” and his claim that universities serve as indoctrination camps for liberalism has become a standard talking point on the right. Epstein engages in a bit of this rhetoric himself. He blames the expansion of the humanities outside of “traditional” Western subjects to include areas such as African-American Studies for declining student numbers. By and large, however, Epstein’s critique is mild compared to what others have said. David Horowitz’s 2006 book “The Professors: The 101 Most Dangerous Academics in America” comes to mind as a particularly vitriolic example.

This war on the liberal arts is born from the same desire that produces voter ID laws: a desire to limit democratic participation. The goal of a liberal arts education was never primarily direct economic benefit for the recipient or even the sort of personal/spiritual development about which many like to wax lyrically. The purpose of a liberal arts education was always meant to be a political education. The Latin ars liberalis refers to the skills required of a free man -- that is the skills of a citizen. The Latin word ars and its Greek equivalent techne do not mean art in a modern sense. Instead the word refers to a craft or a skill. Thus, history, rhetoric and literature were seen as the skills a citizen needed for his job: governing. This was just like metal working was the skill required of a blacksmith for his profession. This is why 19th century reformers eager to expand political participation concentrated so much attention on expanding access to the liberal arts.

When creating citizens, both for the nation and for the world, it is still through the liberal arts that you get the most bang for your buck. Nothing evidences this more than the expansion of the humanities over the past half-century, the very expansion Epstein and others attack. African-American Studies, postcolonial criticism and queer theory provide students with the tools they need to live and work competently and comfortably in an ever more diverse world. Most important, they help them to be citizens of that world. The ability of the humanities to expand and adapt is one of its assets. My 19th century Classicist forebears reacted with horror to the introduction of English as an academic subject, horror similar to what Ethnic Studies Departments often encounter today. Ultimately, however, the inclusion of the vernacular language helped to keep the liberal arts relevant and to fulfil their purpose of educating future citizens.

The importance of the humanities in educating citizens is why we have undoubtedly seen the consequences of the decline in of the liberal arts nowhere more than in the quality of the public debate. The disappearance of the liberal arts from American education has meant the disappearance of the liberal arts from American culture. Rupert Murdoch and his media empire have helped by creating a post-humanities agora where a degenerated shadow of the public debate occurs without the intellectual rigor that a populace trained in the liberal arts would demand. One need only spend a morning with the newspaper or an evening watching cable news to see the horrid effects. The quality of arguments that are regularly entertained would never stand a chance if the majority of the public had been thoroughly shaped by an education with a focus on history, rhetoric and basic geography. We might be able to spare ourselves from believing in Canadian death panels or anything Glenn Beck ever said.

We might also be spared much of the small-mindedness of our current public discourse. The complete absence of reference to any non-Biblical literature during both parties conventions demonstrates how little the humanities are part of Americans’ language. St. Thomas Aquinas is reported to have said, “hominem unius libri timeo”: "I fear the man of one book." I would add, “populum unius libri timeo.” I fear the nation of one book — even if it’s the Good Book. The fact that the Bible is the only book with which it can be safely assumed a majority of American adults are even vaguely familiar is not good if we want to have a full and vibrant public debate. For one thing, it allows our history to be re-written. It allows Americans to believe that the Founding Fathers were inspired solely by Judeo-Christian scripture without reference to the Greek and Romans (or English common law for that matter). It allows us to believe that marriage is static and unchanging institution that has come to us from Eden untouched by social and historical change. Most dangerously, it allows us to live in a democracy completely unaware of what a dangerous battle field history is for such governments, especially when those who are meant to be governing themselves lack the knowledge to do so effectively and thus abdicate their power to the richest or most powerful amongst them.

Education is a political act. For over half a century, the conservative movement has waged a political war on liberal arts education. They have waged this war because they know that without the skills we are provided by a liberal arts education citizens must abdicate our power. They know, like the Greeks and Romans did, that only those with the ars liberalis can do the job of citizens. That is why we must not allow the liberal arts to be further attacked, economically or ethically. A democracy without citizens will not long survive and citizens are only those who have mastered the ars liberalis.