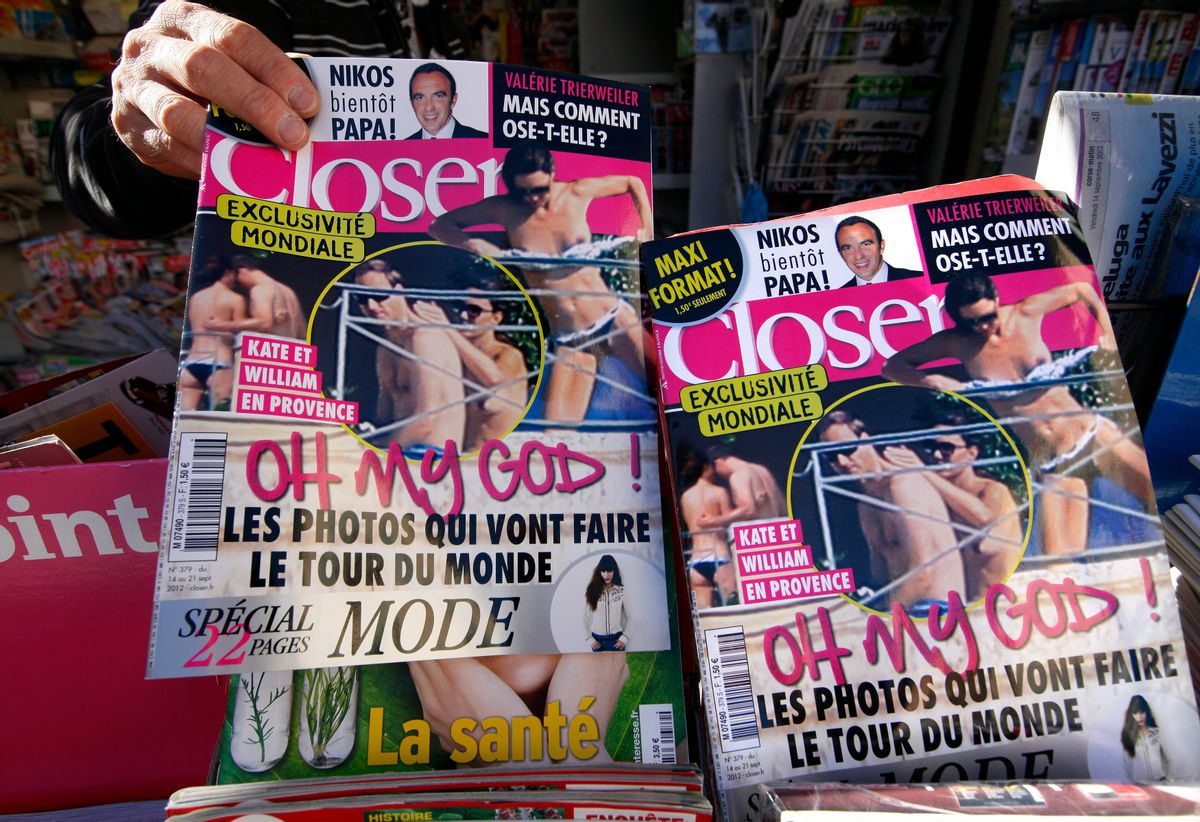 A man holds a copy of the French magazine Closer showing pictures of Catherine, Duchess of Cambridge, and Britain's Prince William are displayed in a newspaper kiosk in Nice. (Eric Gaillard/Reuters)
--

As far as tabloid coups go, this one certainly has all the markings of the brass ring. It's the publication, in the French magazine Closer, of what the magazine says is Kate Middleton lounging with her husband, the future king of England. Topless. Quel scandale!

The photographs, which Closer is teasing as "les photos sexy en Provence," were taken recently while the couple was on holiday at a family member's chateau. In them, the duchess is seen removing her bandeau and relaxing as she and her husband appear to apply sunscreen to each other. It's a scene of intimate unguardedness, a private moment in what the royal family has called a "secluded location" -- made as public as possible.

And for that – despite the inevitable outbreaks out slavering over the duchess' knockers you'll find out there right now – there's been a loud and negative backlash. Apparently there really is still a line of invasiveness and tastelessness to be crossed in our long-lensed world, and Closer magazine just tap-danced right over it.

The publication of the photos, which were allegedly offered first to the British press, has been condemned in the UK Telegraph as "revolting" and "repellent." On Twitter, readers have described the exploitive move in even more colorful terms, both French and English, including "grotesque," "vulgar" and "disgraceful." And the royal family itself, in a statement to the press, has called it a "grotesque and unjustifiable invasion of privacy."

It's been a very long time now, and since then tabloid culture has exploded to new levels of shamelessness, but the British people still recall how Princess Diana was killed in a car accident while being chased through a Paris tunnel by paparazzi. Their tolerance for the French invading the privacy of their royals hovers somewhere around the zero mark. And a nation still reeling from the revelations of the Murdoch machine's phone hacking scandal has no doubt new insights into the concept that some spaces are not to be pried into.

The reaction also represents a very clear distinction between how the public views what the French press has done to Middleton and what went down with Prince Harry just a few weeks ago in Vegas. When photos of the prince cavorting around a hotel room during a spree with his bro Ryan Lochte surfaced in August, the general reaction was a worldwide shrug. Why? Because his nudity was captured by the people he was partying with. He wasn't being stalked by some professional perv with expensive equipment, eager to sell out the duchess' nipples to the highest bidder. You'd think that the French, whose former first lady spent half her career naked, would be more mature about these things.

Though the near universal disgust as the invasion of Middleton's privacy will likely do absolutely nothing to slow down the aggressive, loathsome tactics of the tabloids, the incident seems poised to endear the duchess even further to her public, as it rallies protectively around her. Sure, there's a whopping amount of embarrassment to be had in this, but it's not hers. It rests on the creeper who violated her privacy and the tabloid that paid for that violation. Not in the woman who is comfortable enough in herself and her body to sunbathe topless – and prudent enough to remember her sunscreen.