How Romney can win over the press 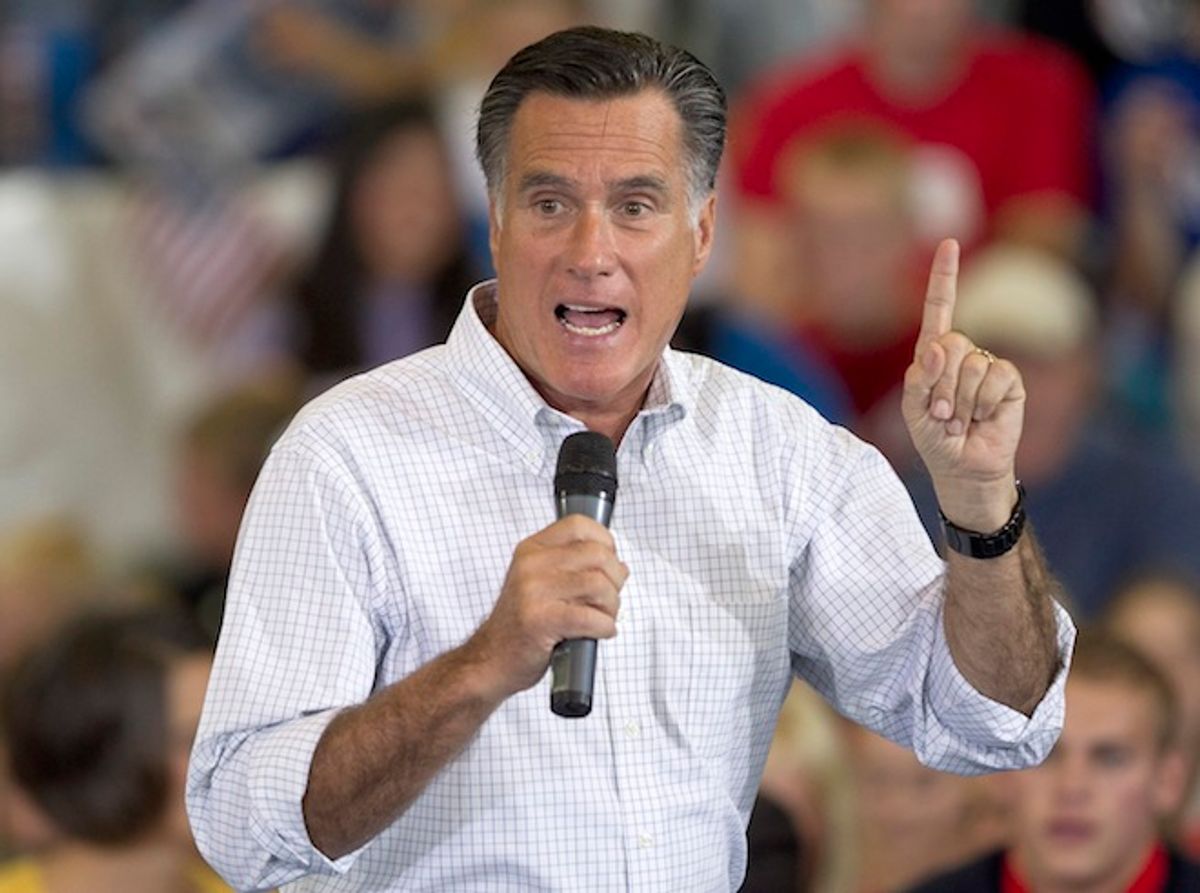 The Romney campaign (and the conservative commentariat) are furious with the press, again. The political press was very mean to them when they falsely and insensitively and bizarrely accused the White House of "sympathizing" with radical Salafists who'd just murdered an American foreign service officer. The press was so mean about this, just like they were so mean about the fact that Romney has lied about welfare reform 600 times, and the fact that Paul Ryan's convention speech was predicated on a series of very easily checkable distortions and omissions. And it's not fair! The press is never this mean to Obama!

"Boston is a bit amazed," the Republican said. "Experienced political operatives say they've never seen the press be so unhinged and determined to write 'Republican in disarray' stories. Many conservatives concerned this is becoming a self-fulfilling prophesy are urging Boston to change the tone and the topic; they think the best way is to go on offense and be substantive, talk about the big issues."

It's apparent (and it's a sign of a complete disconnect from reality) that lots of conservatives and even Romney aides can't figure out why the campaign's Libya statement was "over the line." Here's Ramesh Ponnuru trying to explain the media firestorm to a conservative readership: "A lot of it seems to be based on the idea that Romney has 'politicized' events or 'jumped the gun' in an untoward way." That's actually not it at all. It was the specific wording and the specific claim made in the statement, not the context of the statement. (Though on the "jumping the gun" part, its timing did add to the impression that Romney has horrible judgment.)

The right thinks Romney is getting heat for doing exactly what Obama (in their minds, a "Chicago-style" brutal campaigner) does, all the time. All right-wingers (and a few non-right-wingers) are convinced that the political press gives Barack Obama a "pass" on almost everything, but especially on matters related to harsh campaigning. The extent of the "pass" is, of course, vastly overstated. Campaign reporters and pundits heaped abuse on Obama over the summer for the purported hypocrisy of being mean to Mitt Romney. Romney had enough material to make an ad out of it, capped off with genial old Bob Schieffer asking, "What ever happened to hope and change?" (And negative coverage of the administration not strictly related to campaign matters still counts as negative coverage. Bob Woodward just wrote a whole book about how Obama shamefully failed to Leadership his way to a grand debt bargain.)

The answer for Mitt Romney isn't "be more substantive" or "make it about real issues" or "be more detailed" or any of that shit. Romney's totally correct to be as vague as possible about the specifics of his proposals. The answer is a lot simpler: Just bullshit the press better!

Here's how Mitt Romney can earn himself much kinder media coverage: Talk like Jon Huntsman. If he wants the press to let up, all he needs to do (and he should have been doing this since the day he wrapped up the nomination) is sound "moderate" in public and leave the nutty stuff to vaguely affiliated allies and targeted niche media.

Jon Huntsman showed that you can earn the label "moderate" without actually having moderate political beliefs. Jon Huntsman's actual policies were practically indistinguishable from Romney's. He endorsed the (original) Ryan plan. He said he'd repeal Obamacare. The press thought he was an apostate liberal because he professed to believe in global warming but he didn't support cap-and-trade. Guess what, that's also Mitt Romney's position!

If Romney pulled a Huntsman, his press would be positively glowing. The press loves the Rare Moderate Republican. And the conservative media wouldn't punish him for it as they did Huntsman, because the primaries are over and he's their guy. (They'd also note that his policy positions are still all the things they want, no matter how RINOy he appeared.)

You appeal to the mainstream press by listening to them describe what they imagine a candidate should do to appeal to "independent voters." So: Express Seriousness. Offer Straight Talk. Embrace your inner Scarborough. Disdain partisanship and extremism (on both sides) and commit yourself to forging bipartisan compromise and solving this deficit thing once and for all. Say "civility" a lot. No one will care if your solutions are vague nonsense because all moderate pundits come up with when tasked with figuring out how to solve their pet problems is vague nonsense.

Meanwhile, the shadow campaign -- the mailers and robocalls and local radio ad buys -- continues doing what it's doing now. Obama is a weak socialist and his welfare thugs will steal the election with voter fraud, etc.

It's campaign malpractice to have the candidate and his running mate personally performing the dirty work of character assassination and base riling. Romney does the false welfare attack line himself in all his stump speeches. Romney calls the president a liar himself in an interview. He implied Obama wants to take God off our coins, for some reason, himself. There are people who will perform the race-baiting and religious fundamentalist-scaring for you, Governor. Gary Bauer is happy to claim on your behalf that Obama is going to have the Mint stamp "In ACORN We Trust" on all the dimes. You don't have to do that.

We already have a model for how this could work, honestly, in the 2000 campaign of George W. Bush. Bush charmed the hell out of the press and never talked like a crazy right-winger, even as he made sure to dog-whistle to the crazy right-wingers. (Bush actually lost that election, obviously, but it was a lot closer than it would've been if the press hadn't loved him and hated Gore.)

What's crazy is that Romney picked a running mate who is perfect for this strategy -- the press always loved Paul Ryan's Seriousness -- and so far Romney hasn't just completely wasted him, his campaign straight-up destroyed Ryan's reputation at the convention. Ryan should've shown up with misleading pie charts, not misleading anecdotes.

The good news for Romney is that the press, contrary to Republican belief, has mostly fallen out of love with Obama. He didn't deliver on his "promise" to "change the tone," and he failed to achieve a Reagan/Tip O'Neill deal with John Boehner. That's what Romney should be nailing him on in public, if he actually wants a free ride in the press. (In fact he should bring up the stupid Tip O'Neill comparison as often as possible: There's a reason Chris Matthews loves it!) The bad news for Mitt is it's probably already too late.