In trying to see both sides of Chris Brown/Rihanna case, he forgets fault lies with the person doing the punching 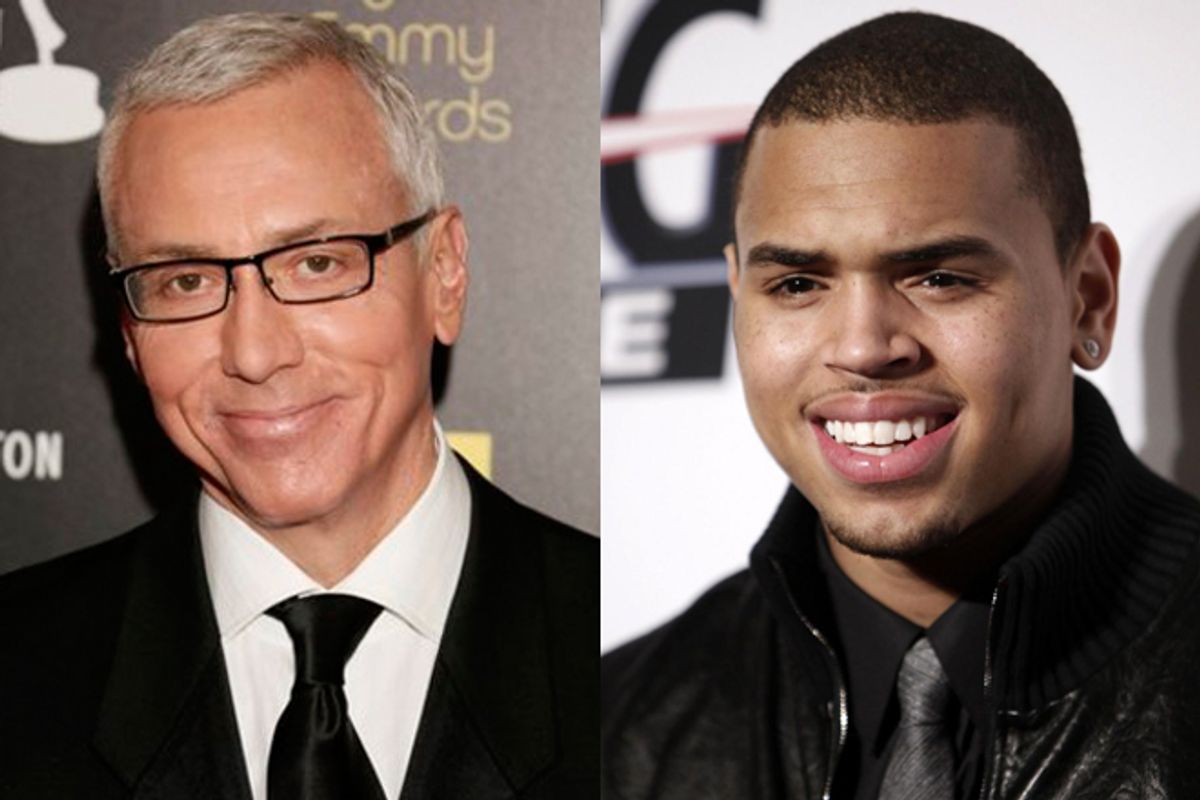 Drew Pinsky -- the professional concern troll, celebrity ambulance chaser and occasional pharmaceutical industry shill -- believes in personal accountability tempered with compassion. That's driven his tough-yet-redemption-offering persona for three decades now. But during a recent visit to Lance Bass' SiriusXM radio show, he offered up an assessment of Chris Brown and Rihanna's violent past that vastly overreached in a bizarre attempt to see both sides.

Rihanna, who was beaten by Brown in a 2009 altercation but has since collaborated with him publicly and embraced him at the VMA, has told Oprah Winfrey that the two have "built a trust again." Pinsky, speculating on whether she's being too easy on her former abuser, had plenty of opinions.

"On average, it takes a woman in a domestic violence situation eight attempts at leaving before she leaves," he said. "They go back — they misinterpret the intensity as love. They think, intense and great, 'He loves me so much, that's why he got so upset.' We haven’t heard the end of this." He continued, "Let’s face it, she's attracted to that … Listen, I don't fault either person. I don't [say,] 'Oh, it's a bad person.' These are human experiences. These are very common situations these days."

It's not untrue that some women have profound emotional challenges extricating themselves from abusive relationships. And it's not even the idea that Rihanna is still drawn to Brown. That much is clear. But by pulling his typical trick of looking at outside behavior and making snap diagnoses, Pinsky casts Rihanna in the role of the woman who – and he's only saying this for your own good, dear – is mistaking violence for love.

He doesn't pay any attention to Rihanna's own assessment that though she was hurt and betrayed by Brown, she very generously understood he needed to get help. Nor does Pinsky acknowledge her apparent willingness to forgive Brown and love him as a friend while creating her own boundaries. Instead, Pinsky sneers that, "face it," a hot-headed partner is just what she's into. And he casually dismisses all the women out there who stay with their repeat abusers as doing it simply for the imagined hot sexy intensity of the relationship. He disregards the fact that while many domestic violence victims are indeed deeply entrenched in the dynamic of abuse, they also have to face the fear of financial ruin for themselves and their children, and the distinct terror of physical retaliation.

And while Pinsky is right in separating the man from his actions, refusing to call Brown a bad person for his bad behavior, he comes off as having a Ph.D. in false equivalencies when he says, "I don't fault either person." Really? Because no matter how twisted a couple's dynamic may have been – and by the way, we don't have the details on the very private particulars in the case of Brown and Rihanna -- the fault in a domestic violence incident generally falls on the person who did the punching. Go ahead and look again at the photos of Rihanna's battered face, or read the police report, and decide that neither person's at fault.

This isn't the first time Pinsky's made this sort of diagnosis. A year ago, after Michael Lohan was arrested for allegedly assaulting his girlfriend Kate Major, he declared, "This is what he and Kate do routinely. This is the pattern they're in. Unless they both go get treatment, this isn’t going to change!" Just a tip: No matter what your assessment of the relationship, no matter how dysfunctional it may look, if a man is beating a woman, that is not known as something the two of them do together.

It's not that a woman never has a part in the dynamic – that Lohan and Major conceived a child together while she still had a restraining order on him speaks volumes about her decision-making -- but that doesn't make any two people equal partners when there's abuse. Especially coming from the man who was quick to call Kim Kardashian an abuser last year for taking a swing at her then-husband Kris Humphries -- with less apparent judgment that Humphries must really have been into it.

Pinsky rightly told Bass that abusers and abusive relationships don't change overnight; they take sustained work over a long period of time. But where he errs mightily is in his eagerness not to cast "blame," and the implied expectation that victims so often get -- that the work of ending violence rests equally on their bruised shoulders.