Bowie. The Smiths. Angst. "Perks of Being a Wallflower" captures its era perfectly, missing only Matthew Broderick 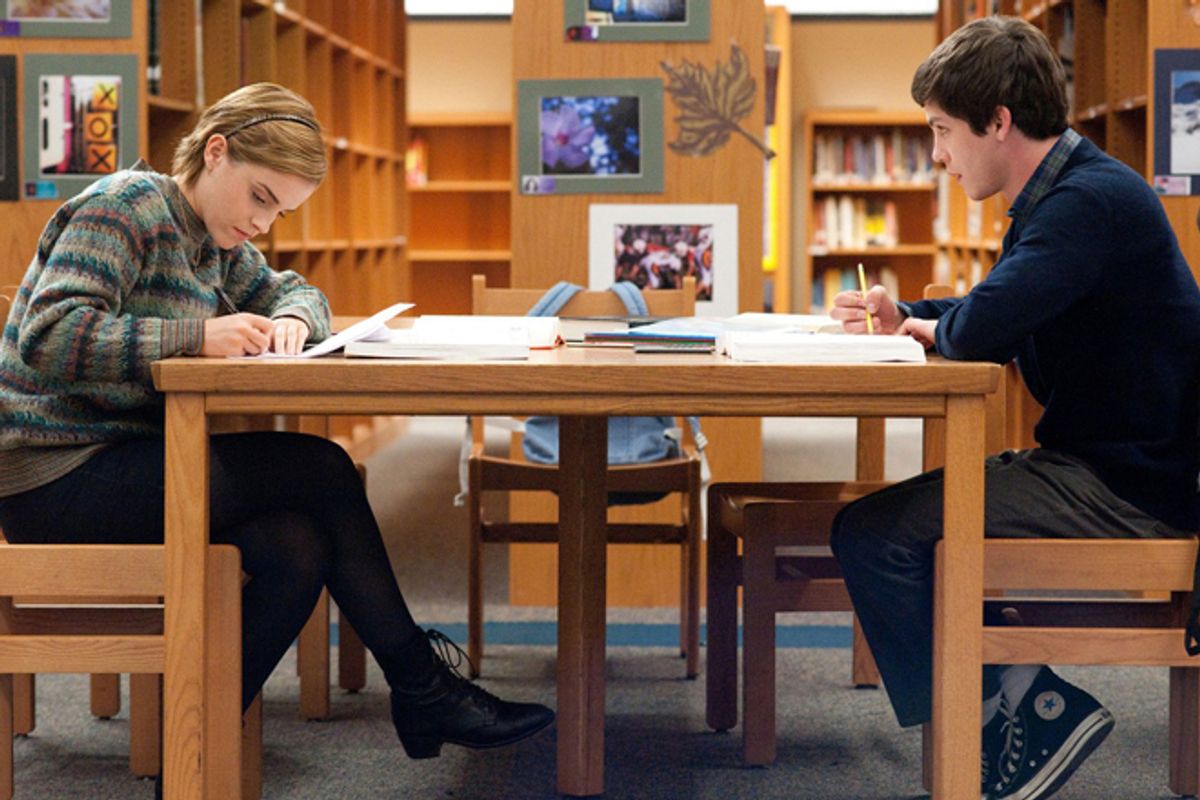 Set long ago in a distant land of calf-length plaid skirts and high-waisted pleated jeans – approximately the George H.W. Bush administration – Stephen Chbosky’s “The Perks of Being a Wallflower,” which was first a best-selling novel and is now a film written and directed by the author, thrives on having little or no attitude. Its main characters are a group of high school misfits trying to be cool, an archetype of American culture if ever there was one, who are very far from being the subculture-savvy urban teens of the ‘60s and ‘70s or the ruthlessly plugged-in teens of the 2010s. Their rebellion against life in the middle-class suburbs of Pittsburgh is, in fact, both mild and vague: They’re into the Smiths and they go to midnight audience-participation screenings of “The Rocky Horror Picture Show”; when David Bowie’s “Heroes” comes on the radio they’re blown away, but none of them has ever heard it before or knows who the singer is.

Actually, the fact that reformed bad girl Sam (Emma Watson), her gay stepbrother Patrick (Ezra Miller) and their posse of friends aren’t painfully hip or terribly far from the mainstream – just a little bit alienated from their surroundings, and more than a little bit stranded between eras – is precisely the source of the power in Chbosky’s story. His novel was an immediate teen sensation when first published in 1999, and has reportedly sold close to a million copies. (Subsequently he was the driving force behind the short-lived but much-loved TV series "Jericho.") It’s both fair and necessary to describe Chbosky’s book as a mashup of “Catcher in the Rye” and “The Great Gatsby” transmuted to 1990 suburbia, and indeed both of those novels figure large in the imagination of Charlie, his cryptic protagonist. I’m certainly not putting Chbosky on the same level as Salinger and Fitzgerald, but what he captures along with them is the terrible urgency of youth, those moments in anyone’s life when we begin to grasp that life is in fact happening to us too, and that there is no turning back the clock to childhood.

Charlie is a painfully shy incoming freshman who yearns to be a writer and comes under the protection of Patrick and Sam, a pair of life-hardened, self-exiled seniors. He’s played in the film by Logan Lerman, the likable if rather bland young actor who also plays the title character in the “Percy Jackson” series. If Charlie is definitely the film’s weak spot, that may have more to do with his autobiographical, blank-slate persona than with Lerman, although the latter does seem entirely too suave and together for the role (perhaps because he’s 20 years old and trying to play 15). Even though Charlie’s carrying around a pretty big childhood secret and battling a mental illness that’s in abeyance but not quite conquered, he feels much less the center of this wrenching “it gets better” drama than Patrick and Sam do. (A character in this film actually uses that phrase – is Chbosky its official coiner?)

Watson looks and acts nothing like Harry Potter's gal-pal Hermione Granger in this role; she’s a suburban American girl from hair to toenails, a half-devoured beauty, still almost fatally insecure, who’s trying to recover from a past of abuse and her reputation as a slut. Charlie falls in love with her at once, of course, but also understands that on many levels the whole idea is doomed: She’s a senior who dates supposedly grown-up college guys, while he has trouble speaking in complete sentences. Even the unspoken fact that they’re damaged in similar ways is a problem, both pulling them together and pushing them apart. It’s Sam who climbs out into the bed of Patrick’s pickup when “Heroes” comes on the radio and stands up, whooshing through a highway tunnel in the Pittsburghian night, as if embracing that sudden teenage knowledge that you actually aren’t immortal even though you feel that way, and given that it would be fine to die right now.

If you’ve seen Ezra Miller in “We Need to Talk About Kevin” or “Another Happy Day” or “City Island” or “Afterschool,” you already know that he’s established himself as a teenage actor of remarkable versatility and highly improbable depth. Here he takes one of the most hackneyed central-casting roles in the lexicon – the wisecracking gay sidekick, who covers his pain with laughter – and fills every moment with awkward significance. Like Sam and Charlie and their other friends, including willowy aspiring filmmaker Alice (Erin Wilhelmi) and punk-inflected would-be intellectual Mary Elizabeth (Mae Whitman), Patrick is trying on semi-adult masks to see if they fit. He’s doing so in that confusing post-Harvey Milk, pre-gay marriage era when LGBT rights was emerging as a national issue but options for real-life gay kids in suburbia were pretty limited.

If at first I tried to resist these hapless Pennsylvania teens who’d never even heard of David Bowie, for Christ's sake, I was won over completely by the time Patrick and Sam are ready to graduate and Charlie has faced down his demons one more time. Fact is, much as you and I might want to protest that we were cooler than these kids, wherever and whenever we did our growing up, we probably weren’t. Partly I mean that the question of when you first heard a Velvet Underground record (insert your own limbo bar of coolness here) isn’t really important, and partly I mean that we too were fumbling around in the dark, trying things out, kissing the wrong people, standing up in the bed of that pickup truck and trying, for a second, to touch the infinite.

“The Perks of Being a Wallflower” opens this week in New York and Los Angeles, with wider release to follow.

Emma Watson Ezra Miller Movies Our Picks Our Picks: Movies Stephen Chbosky Teenagers The Perks Of Being A Wallflower