Don Draper has been shut out, despite "Mad Men's" awards. Now there's competition from "Homeland" and "Downton" 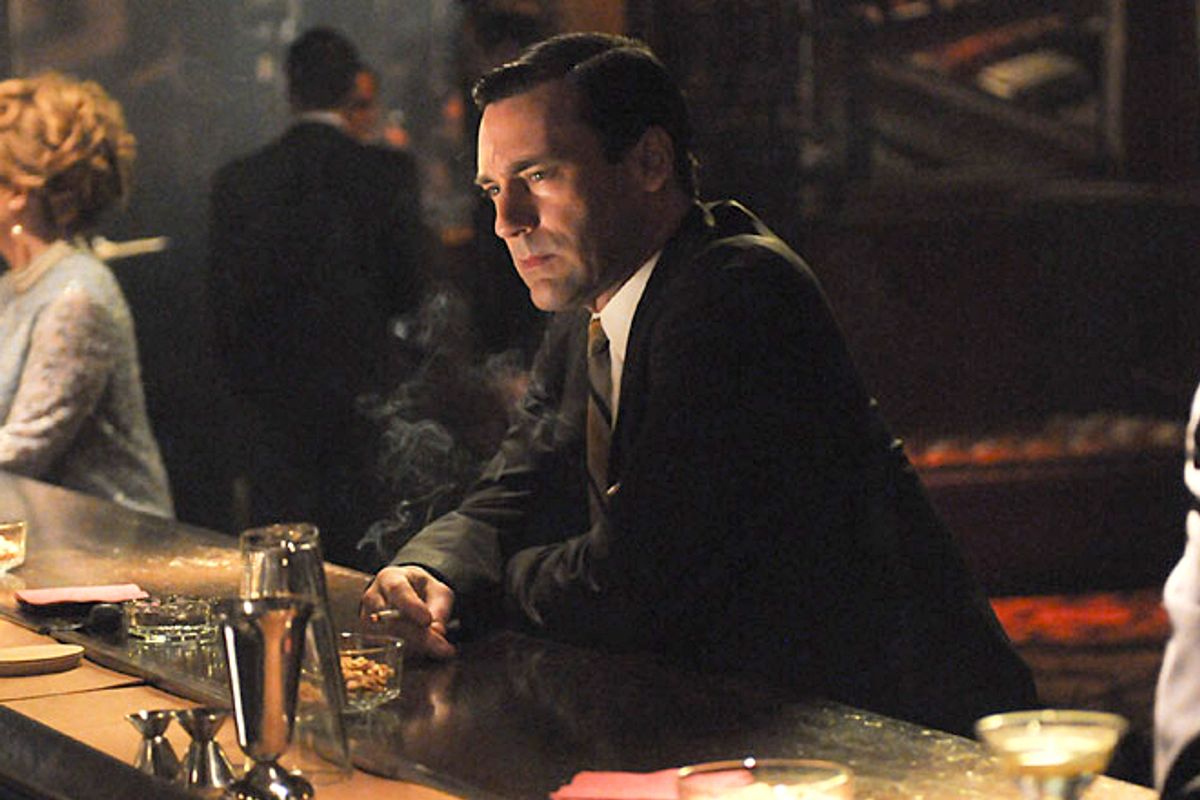 As if there were not enough going on in the TV universe right now, the Emmy Awards air this Sunday night, hosted by Jimmy Kimmel. This year’s nominations were pretty forward thinking ("Louie"! Lena! Schmidt!), but will the awards themselves be? Or will it be “Modern Family” and “Mad Men” all over again? (Not that I’m complaining about "Mad Men.") Here are some category-specific story lines to look out for on Sunday night.

There’s a story in the New York Times today all about how psyched PBS is on “Downton Abbey’s” Emmy hopes. Objectively, Season 2 of the British costume drama was inconsistent — Matthew’s vanishing paralysis! Bates turning into a whiny maybe-murderer! That amnesiac heir covered in bandages!— but it’s got momentum, more viewers than “Mad Men” and an audience who doesn’t really care how bad it can be. Moreover, “Mad Men” has won best drama four years in a row, and no show has ever won five in a row. If “Downton’s” not the show to upset “Mad Men," there’s always Showtime’s far more deserving “Homeland."

“Mad Men” has won a ton of Emmys -- but its actors, not so much. Put as bluntly as possible: Jon Hamm has never won an Emmy. Crazy, huh? This year, as usual, a number of “Mad Men” actors have been nominated, including Hamm, Elisabeth Moss, Christina Hendricks, Jared Harris, Ben Feldman (aka Ginsburg)  and, uh, Julia Ormond? Hamm faces the problem he always does, which is that “Breaking Bad’s” Bryan Cranston is in his category (last year, he lost to "Friday Night Lights'" Kyle Chandler). Meanwhile, Moss faces the lock that is “Homeland’s” Claire Danes; Harris has to go up against Aaron Paul and Gus Fring and Peter Dinklage; and Hendricks is in a battle with “Downton’s” quipping Dame Maggie Smith. Obviously, don’t feel too bad for any of them. They’re still on the best show on television, but it’s possible, yet again, they won't walk away with any individual hardware.

3.) Best actor in a comedy, or how will the “cool” Emmy nominees actually fare?

The Emmys nominations this year recognized some beloved, relatively niche shows and performances: Louis C.K., “Community” (in the writing category), Lena Dunham, “Girls,” Schmidt, Merritt Weaver and Mayim Bialik. But will any of these actors or shows actually win, or will it very much be an “it’s an honor just to be nominated” situation? Probably it will be an "it's an honor just to be nominated" situation. (Except for Bialik, who has a real shot.) A bellwether of this trend is the best actor in a comedy category, in which C.K. was nominated. He genuinely deserves to win, but he’ll probably lose out to Jim Parsons or Alec Baldwin instead. Baby steps.

4.) Best writing in a comedy series, or is this the actual best comedy award or what?

The six nominees for best comedy this year are “Modern Family,” “Big Bang Theory,” ‘Curb Your Enthusiasm,” “Veep,” “Girls” and “30 Rock,” a pretty solid selection of comedies, until you remember that “Community,” “Parks & Recreation” and "Louie” have all be left out. But, oh, what have we here? Why, look, it’s the the best comedy writing category, in which “Louie,” “Community,” “Girls” and two episodes of “Parks” go up against each other! It may be a smaller honor, but at least the Emmys found a place to recognize “Community’s “Remedial Chaos Theory” as well as scripts written by Louis C.K., Lena Dunham and Amy Poehler, all of which are likely to be better than whatever wins the more high-profile best comedy award.

5.) Best actress in a comedy, or when will Leslie Knope get the recognition she deserves?

The best actress in a comedy field is a crowded one, with seven nominees. (Look out for a gag when this category gets announced. Amy Poehler usually organizes something. Last year all the nominees came onstage at once. A few years ago they all wore weird eye-wear.) Melissa McCarthy won last year for "Bridesmaids" "Mike & Molly," and she’s joined this year by Amy Poehler, Lena Dunham, Zooey Deschanel, Tina Fey, Edie Falco and Julia Louis-Dreyfus. These are all great actresses, but Leslie Knope is an all-time iconic TV character, the woman who made caring pretty cool, rescued the Tracy Flicks of the world from constant mockery, and saved ambition from being a dirty word. It's time she got her due.