New numbers say millions of kids are sneaking in, with Mom and Dad's help. But I will not be friending your child 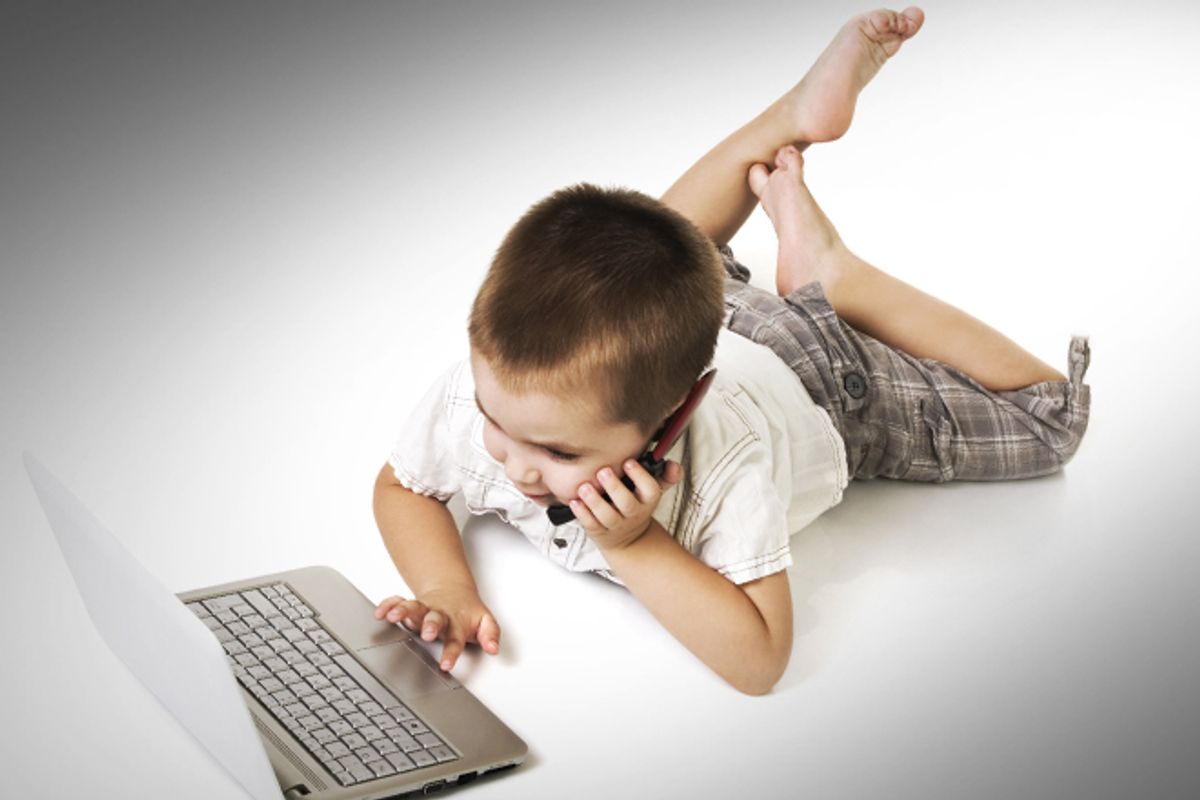 The news comes as zero surprise to anyone who's ever  gone on Facebook and seen the face of a friend's elementary school-age child under the heading "people you may know." Despite the fact that Facebook officially forbids users under the age of 13 from registering, a Reuters report this week reveals there are an estimated 5.6 million of them there anyway. But not mine.

If you're on Facebook and your life intersects in any way with kids, it's easy to assume any human big enough to bang on a keyboard has a page. I have a friend who openly shares her page with her young daughter, another whose kindergartener is on Facebook. The child's profile suggests she's into Dora the Explorer. Other friends routinely get "likes" from my children's schoolmates.

How did all these kids get there? A Microsoft Research study last year found that 36 percent of parents knew their children joined Facebook before age 13 – and that many had helped them do it. FTC Chairman Jon Leibowitz said this week that "It's not surprising to us to see 12-year-olds sneaking onto Facebook," but added that the issue is "particularly complicated" by parents who are assisting their kids in signing up. "Is it troubling?" he asked. "In some ways it is. Is it a story in black and white? Not really." No parenting choice ever is.

Plenty of parents don't see any big deal in letting their children use Facebook as an online social outlet -- especially as a means of connecting with far-flung friends and family members. And others cite other compelling reasons for letting kids on Facebook. Last June, Scott Kleinberg wrote in the Chicago Tribune that truly opening up Facebook to children could have far-reaching, positive implications: "Facebook should use its social networking monster of a platform as a way to get kids excited about homework and in a way that makes Facebook as necessary as a textbook. It should be the de facto place for teachers, parents and kids to go to learn with and from each other."

Even professional hand-wringer Laura Sessions Stepp has opined that Facebook could be a tool for kids to gain wisdom and learn appropriate online behavior modeling: "Just think how much guidance the under-13 set would receive," she says. Yet there's an obvious dark side to the story as well, neatly evidenced in a stomach-turning cyber-bullying New York Times story earlier this month about a group of sixth graders involving one victim and 57 classmates. That's 58 kids who, according to the stated rules of Facebook, aren't supposed to be there in the first place.

Facebook's current restrictions keep it in compliance with the Children's Online Privacy Protection Act, meaning the company would have to revamp some of its architecture if it were to officially open up to younger members. Yet it's a possibility Facebook has toyed with in the past -- most recently last summer, when it began exploring parental controls. For now, though, for this family, the parental control of not having my kids there at all is working out just fine.

While I don't have a strong opinion about how any other parent guides his or her child's online life, I'm not ever going to friend your kid. More significantly, I'll admit I'm relieved my own daughters still have zero interest in Facebook. Of course, that may be in no small part because they're young enough to find Instagram and Tumblr far more intriguing than the ancient civilization of FB – proof that a generation gap in social media occurs roughly every two years. (Someday I'll tell them about ye olden times of MySpace.)

It's not that my 8- and 12-year-old kids don't have online lives, or that I've somehow managed to hide them from the existence of Facebook and the fact that some of their friends are already on it. It was never an active plan to keep them off Facebook until the magical 13th birthday arrived. For now, they'd just rather spend their limited computer access time in more age-appropriate venues: a fairy-centric playland for the younger one, a tween and teen creative writing community for the bigger one.

And that's what feels appropriate and sensible for us. Because when the issue of bringing children onto Facebook arises – and that of the parents that assist them in getting there – I sometimes wonder who is really the driving force. Is it the child -- or the parent? There's a pervasive sense that any media somehow belongs to everybody and if Mom and Dad are there, wouldn't the kids want to be too? But there's something to be said for spaces that are not all things to all people. Isn't Facebook complicated enough to sift through and attempt to compartmentalize already, with all your co-workers and ex-lovers and grandparents there?

I like that just as in my offline life, there are places in my online life that are not for children. And I like that my children have similarly found their own spaces just for them. If, when my firstborn turns 13 in a few months, she decides she's ready for Facebook, I'll be supportive of her choice and the friends she adds. But when I want to know what's going on in her life, I'll still just ask her at the dinner table.