Sure, she's gained a few pounds -- and she doesn't feel bad about it "for a second" 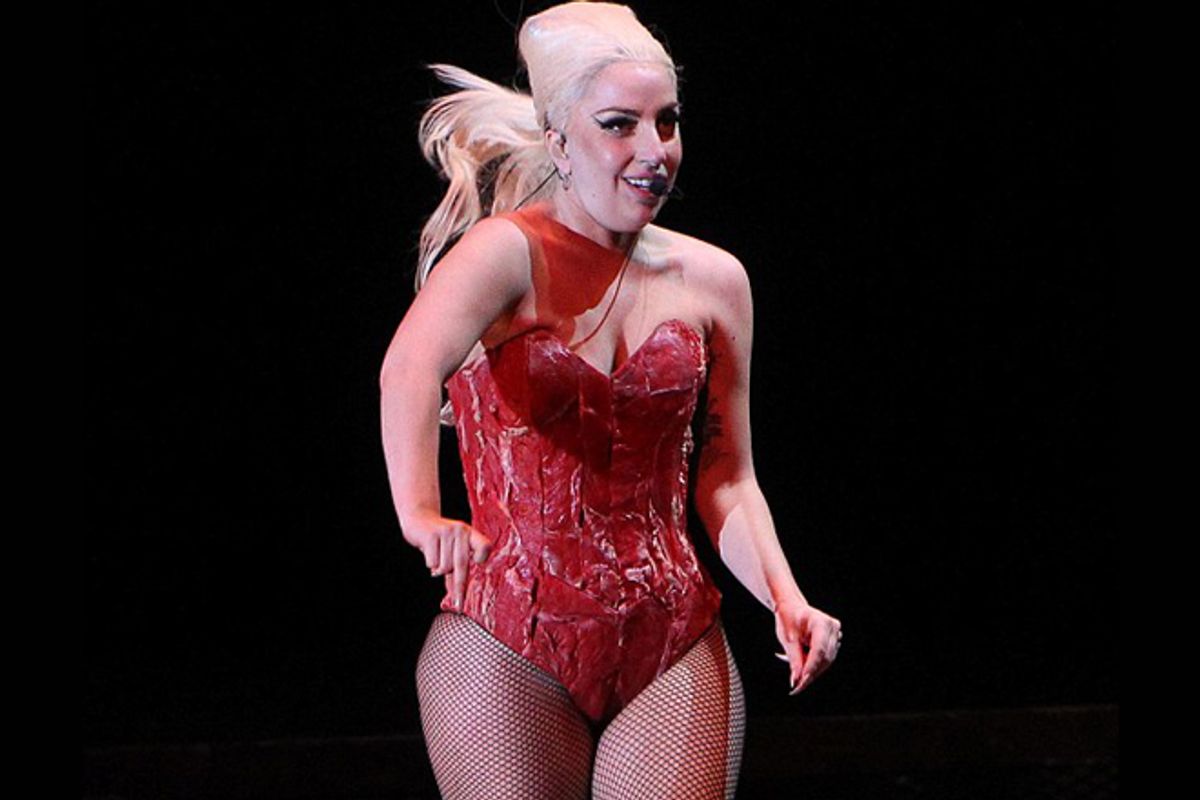 Go ahead and freak out about Lady Gaga's weight. Revel in the headlines that she's been forced to revamp her tour costumes because she's "bulging out of her corset" thanks to an "extreme weight gain" she's revealed on her recent tour. Gasp that she's piled on so many pounds that she just doesn't slink into a filet-mignon bustier like she used to. Because Lady Gaga, thank God, doesn't have a single regret.

The perennially provocative singer admitted to radio host Elvis Duran recently, "I’m dieting right now, because I gained, like, 25 pounds," but quickly added, "And you know I really don't feel bad about it, not even for a second. I have to be on such a strict diet constantly. It’s hard because it's a quite vigorous show, so I tend to bulk up, get muscular, and I really don’t like that. So I'm trying to find a new balance." Balance! Yet another radical idea!

Gaga's body has always been her canvas and as such, fair game for public debate and discussion. She's posed nude in magazine spreads and perfume ads. She's gone butch – complete with sideburns and stubble – in male drag. And let's not forget the phase when she was wearing horns on her face and shoulders. Ironically, just earlier this year, she was accused of looking too "frail" and raised eyebrows for tweeting that "Pop singers don't eat." But none of that can ever compare to the apparent sin of becoming a larger size.

What makes Lady Gaga unique – and refreshingly body snark-resistant – is that even when she's at her most underdressed, shimmying around in a bikini with Beyonce, Gaga understands the difference between demanding you look at her and begging you to ogle her. She's a distinctly post-sexual performer, a woman who's adored by millions but has famously copped to celibacy. Her public persona uses her body as a work of art, not an object of lust. So if you have a problem with her size, if it's aesthetically unpleasing to you, it's really your issue, isn't it? Gaga's never given a damn about making herself pretty for you.

It's clear that Gaga is figuring out her best course of "balance." She can jokingly admit that "I love eating pasta and pizza. I'm a New York Italian girl. My father opened a restaurant. It's so amazing ... it's so freaking delicious, but I'm telling you I gain five pounds every time I go there. So my dad wants me to eat at the restaurant, and I'm like, 'I've got to go where I can drink green juice.'"

But fortunately for Gaga, her image doesn't rely on how bangable she appears at any given moment. Sure, she's been on the receiving end of some concern trolling, but imagine the nuclear-level scorn Beyonce would have faced had she not rapidly melted off her pregnancy weight and boasted to fans, "Y'all have no idea how hard I worked! I had to lose 60 pounds. They had me on that treadmill. I ate lettuce!" Picture the crap Katy Perry and Rihanna would have to put up with if they went out into the world with an ounce of muffin top. Actually, you don't have to. They'd be accused, as poor Britney has, of "chunking out" or looking like "a linebacker for the Rams." Hey, anybody remember 15 years ago, when "Ally McBeal" was a big deal and for about five minutes people were talking about how maybe encouraging women to be emaciated wasn't such a hot idea? Remember Sunday at the Emmys, when Sofia Vergara and Christina Hendricks once again proved that interesting women come in all BMIs? Guess not.

Fortunately, it wouldn't be Gaga to just shrug off some weight gain and miss a teachable moment. Over the weekend she posted a photo of Marilyn Monroe and the quote, "To all the girls that think they're ugly because you're not a size 0, you're the beautiful one. It's society who's ugly." And she added, "And thanks to my fans who love me no matter what, and know the meaning of real beauty & compassion. I really love you." She then issued the sartorial equivalent of an upraised middle finger by stepping out in a balloony dress that seemed inspired by a post-Wonka factory visit by Violet Beauregarde.

You think a woman who's worn sideburns and horns and lobster shoes gives a damn about wearing a few extra pounds? She may be figuring out, as we all do, how to make healthy choices, but she seems to be living her own creed: "Don't hide yourself in regret, just love yourself and you're set."