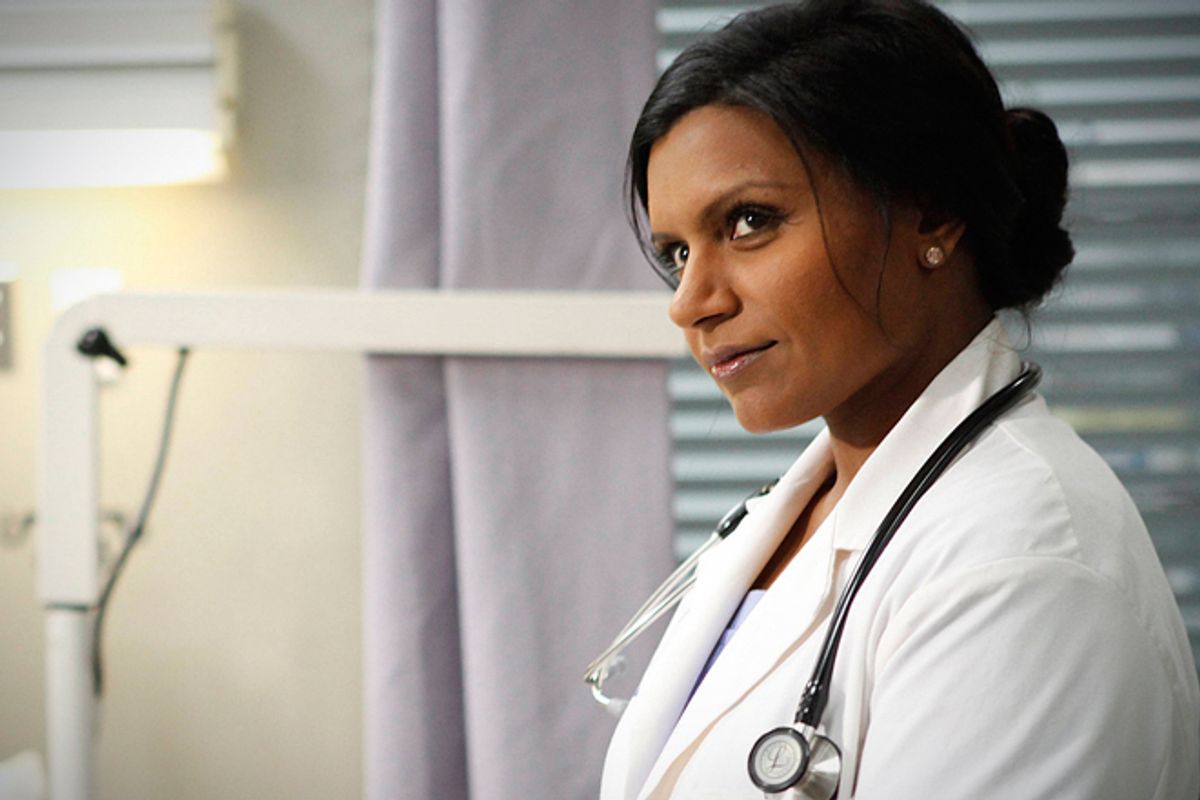 As a performer — and even, sometimes, a persona — Mindy Kaling vibrates with an almost unseemly self-confidence, an implacable self-satisfaction that is the raw material she manipulates for laughs. Kelly Kapoor, the pop culture-obsessed character Kaling has played for the past eight seasons of “The Office” (while Kaling also wrote for the show), is an incompetent, unembarrassable ditz immune to the judgment of others. She steadfastly believes she knows better than everyone else, even as the evidence mounts against her — in fact, there seems to be no amount of evidence that would rattle her core self-love, which is what’s so funny about her. Asking for a promotion, even though all of her managerial experience involves managing herself, Kelly proffers deadpan, “I am not easy to manage.”

On the confident, acerbic new sitcom “The Mindy Project” — it premieres Tuesday night on Fox, and is easily the best freshman comedy of the season — Kaling (who also created the show) stars as Mindy Lahiri, a 31-year-old OB-GYN. Lahari is not such a fool as Kelly, but she radiates a similarly innate self-regard.

Kaling’s great comedic territory is entitlement. Her characters have been loved and protected so fiercely, and coddled with so many after-school classes, that their confidence is not mutable but bedrock. These three Kaling characters -- Kapoor, Lahiri and the public writer, actress and prolific tweeter known as Mindy Kaling — represent a spectrum of performances riffing on that theme. The key distinction between them is not how entitled they are, but how closely their sense of entitlement reflects reality. Only one of these three is a talented, hardworking and scathingly funny multi-hyphenate. The other two, a lifetime employee at a crappy paper company and an unruly OB-GYN whose love and professional lives are a wreck, are merely comic.

As is all but required of unmarried women in pop culture these days, Mindy Lahiri’s life on “The Mindy Project” is a mess. How much of a mess? In the first episode, she gives an awkward toast at her ex-boyfriend’s wedding, steals a bike, drives it into a pool, gets arrested, misses a patient’s birth, screws up a good date, and reneges on her pledge not to sleep with her attractive colleague, a miscast Brit who says inadvertently hilarious things like, "Want to hang out ... deep?" All the while, she is vowing to finally, really turn her life around.

If this seems sort of standard messy lady behavior in the post-“Bridesmaids” era, well, it is. But with comedies, it’s the execution, not the freshness of the premise that matters. When Mindy drives her bike into that pool, a Barbie doll at the bottom appears to speak to her. Its blond hair waves in the aquamarine water as it says what needs saying: “You are acting like a fucking idiot.” I laughed.

As a longtime writer and performer on "The Office,” Kaling has spent years playing a character audiences are supposed to laugh at, even if it’s with affection. Kelly Kapoor may be involved in some stellar “Office” moments (see, Kelly giddily describe something as “B-A-N-A-N-A-S,” all goofy Gwen Stefani swag), but she’s still a nincompoop who fancies herself a mean girl. Because of her training, Kaling is very comfortable making Mindy Lahiri the butt of the joke, without caveats.

Unlike her colleagues on Fox’s Tuesday night lineup — Zooey Deschanel’s loopy and well-meaning Jess on “New Girl,” and the dedicated single mom Kate on the new sitcom “Ben & Kate” — Mindy is not an adorkable sweetheart. She's a narcissist. She’s prickly and self-involved, the sort of doctor who, trying to advance her career, requests that her assistant start sending insured patients her way. When the assistant says, “So more white people,” Mindy tells her not to write that down, while mouthing, “Yes, more white people.”

Mindy is also barbed in a fundamentally different way from the sharp-tongued, self-identifying bitches of “Whitney” or “Two Broke Girls.” They actively see themselves as women who brook no bullshit, and moreover came by their cynicism and bad attitude through insecurity and traumatic childhood experiences. (Both are based on the comedian Whitney Cummings. The character Whitney has negligent, divorced parents, while “Broke Girls'” Max grew up without a father and has a history of sexual trauma.) Mindy is not damaged, she's spoiled. Upon getting arrested, she sasses the police officer, and is then sprung by her best friend — who happens to be the governor’s daughter. She's the sort of friend you might make at Princeton, where Mindy went to college. (Kaling actually went to Dartmouth.) Walking out the door, she asks for a tour of the Special Victims Unit, and she’s not kidding.

Throughout the pilot, Lahiri talks about how she wants to change, get her career together and find a man, but she treats her plans to mature in her career and her love life the way most people treat New Year's resolutions, like disposable suggestions. Lahiri tosses out the option of “Eat Pray Love”-ing her way to a more adult life, and then immediately rejects it because she can't be bothered with the praying -- i.e., the portion that involves introspection.

She doesn’t really believe there’s anything wrong with herself that getting a boyfriend wouldn’t fix, and she's still too uncannily confident to truly worry her life won't turn out like one of those romantic comedies she is obsessed with. (Besides, Chris Messina is lurking around as an aggro doctor and the only person more self-regarding than Mindy, so she’s actually all set in the romantic long term.) The episode ends with Mindy backsliding — screwing that hunky Brit again — with a smile on her face. She does what she wants. It may not be admirable, but it is often hysterical. She and her television show are both irrepressible.